skip to main content
Return to Fordham University
You are at:Home»Colleges and Schools»Fordham College at Lincoln Center»Fordham Welcomes Class of 2026

Fordham welcomed just under 2,600 students to its incoming class on Aug. 28—the second largest class in the University’s history.

Opening Day at both the Lincoln Center and Rose Hill campuses saw students and families brimming with excitement as they carried their belongings to their new rooms and prepared for their first year of college. They were greeted bright and early in the morning by cheering older student volunteers, decked out in Fordham maroon, yelling each new student’s name and hometown as they arrived. Commuter students were also warmly embraced by their new Ramily, meeting up at the check-in tables and joining in the welcome receptions.

The Class of 2026 is one of the most diverse classes Fordham has ever had, with more than 46% domestic students of color and 7.7% international students. 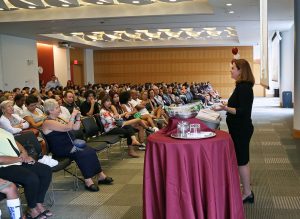 President Tetlow addressing the class of 2026 at the Lincoln Center campus.

The new Rams hailed from 47 states and Washington, D.C.; more than 50 countries; and all five boroughs of New York City. More than 500 students in the incoming class are from New York City, including more than 140 from the Bronx.* The average high school GPA for the class is 3.71.

In her welcoming remarks, Fordham’s president Tania Tetlow expressed solidarity with the class of 2026, as this is also her first year at Fordham. She started on July 1, after serving previously as president of Loyola University New Orleans.

“This class will always mean the world to me, because we are starting in this new place, for some of us in a new city, for the very first time together,” she said.

“And if any of you are like me from a warm place, we get to deal with winter and snow. I’m going to be in the biggest, most ridiculous down coat you’ve ever seen. Feel free to make fun of me, but I won’t care because I’m going to be warm.”

She emphasized how much the University community expects from them, but also how much value there is in trying, failing, and trying again.

“For those of you who’ve never got an A minus in your life and are nervous about whether you’ll stumble, folks with the best of intentions will tell you, ‘Don’t worry, you’re not going to mess up. You won’t stumble.’ Those people mean well, but they’re lying. You will make a mistake and you will stumble. It is not about whether you’re perfect, because you are not. It is about how you handle it when you trip and fall,” she said.

“If you hear one thing from me today that you remember, it is that each and every one of you belongs here. If you have a really bad day and you’re doubting that, email me, and I’ll remind you. Tell me about all the brilliant things you do and succeed at while you’re here, but what I’ll be most proud of is if you send me your stories of when you stumbled and you picked yourself up.”

Crossing an Ocean to Reach the Big City 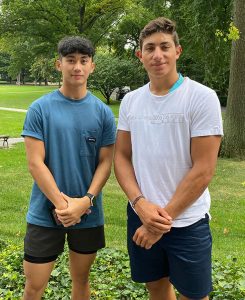 The ability to earn two degrees in five years is one of the reasons why Mariano Chegwin, who was born in the U.S. but grew up in Colombia, decided to attend Fordham College at Rose Hill.

“New York is a really big factor and the program is really cool—I’m doing the 3+2 program with Columbia,” said Chegwin, who is pursuing an engineering physics degree. “Getting those two bachelors in five years—it’s a major perk.”

Chegwin is also a licensed skydiver, which is one of his passions. Finding a local jump site is high on his current to-do list.

“I can’t live without skydiving right now—I love it, it’s a form of meditation for me,” he said.

Coming as an international student, Chegwin moved in a few days earlier and participated in the Global Transition Program alongside William Foong, who came to Fordham from Malaysia.

Foong, a Gabelli School of Business student with a plan to study finance, said Fordham’s location helped draw him in.

“I wanted to be in New York, I have family here—my sister’s at NYU, so it’s nice, everyone’s here,” he said. 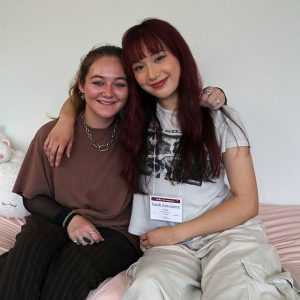 Josephine Spink, a native of London who was accepted into Fordham College at Lincoln Center’s honors program, always knew she wanted to go to school in New York City; she is interested in studying neuroscience, law, or joining the pre-med track.

“I feel like New York is quite a lonely place at times, because people are really independent, and Fordham was the only school that emphasized how I won’t be able to blend into the background and just disappear. They will notice me,” she said.

Before landing in New York on Aug. 24 with her parents, Faye Gotsopoulou, a native of Athens, Greece, had never even set foot in the United States. Gotsopoulou said she was drawn to FCLC’s neuropsychology program, and although adjusting during the first two days was tough, things were looking up; on Sunday she was offering to teach her suitemates Natalie Sanvidge, from Redwood City, California, and Emma Hague, from Saratoga, New York, how to make Greek coffee.

“When I was very young, I remember writing in my journal that I wanted to go to New York City. It was just a dream at the time, but here I am,” she said.

“I have three sisters, so it was really hard saying goodbye, but everyone here has been so supportive.”

‘One of My Proudest Moments as a Dad’

Domenic Hoxholli remembers receiving the email that he had received a Cunniffe Presidential Scholarship, which is given to students with outstanding academic performance and a commitment to leadership and service. He was packing to go on a four-day retreat where he would be without his phone, and checked one last time when he saw the email come through. 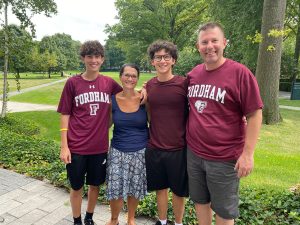 He remembered calling his dad, Armand, who was about to head to his third job, to let him know the good news.

“I’m really proud of him,” Armand said. “I came to this country 20 years ago as an immigrant, and seeing what he’s become is one of my proudest moments as a dad. I feel great because now he’s independent and I’m excited to see what the future holds for him.”

Domenic, who is from Somerville, Massachusetts, said that he was drawn to the Gabelli School of Business for its values and academics.

“I think it’s a great business school,” he said, noting that he likes the liberal arts core. “The way that there’s an emphasis on a holistic approach to business was what I enjoyed about it,” he said.

Norbert Okoye was tucked tightly into the backseat of his parents’ SUV with his belongings all around him on Sunday morning as he waited in the line of cars entering the Fordham parking lot.

Okoye, who had made the drive from Long Island to the Rose Hill campus, said that he was excited to start at Fordham College at Rose Hill as a biology major on the pre-med track, something that he was inspired to do because of his mother, Jennifer, who works as a nurse.

“I’m tearing up already,” Jennifer said in the front seat while smiling at her son. She said she hopes that he would get “as much as possible” out of his whole experience at Fordham and that it would help him become “a successful human being” and someone who contributes to society.

“I’m just excited to live in the city and just experience being independent,” Norbert added. 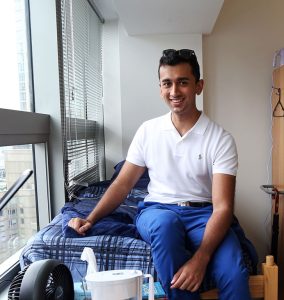 Deepak Menon, a native of Sarasota, Florida, enrolled in the Gabelli Schools of Business Global Finance program, arrived early to participate in Urban Plunge, which he called eye-opening.

“The reality of the situation hasn’t set it. I feel like I’m at summer camp right now. I’m in awe, taking it all in,” he said, while taking in the city view from his room at the Lincoln Center’s McKeon Hall.

“Subways are really new to me. We don’t have them, and it makes the city accessible.

Today I went down to Wall Street and just walked around. It was really cool.”

Laura Moshier, a native of Columbia, South Carolina, who is planning to major in new media and digital design, was already familiar with the Lincoln Center campus, having participated in The New York Times’ annual summer academy held there. 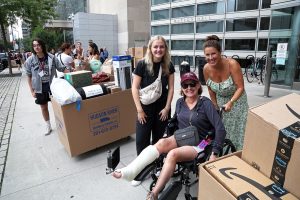 Her mother Tammy Davis broke her leg two weeks before move-in day, but was so determined to see her daughter off, she recruited her friend to help. Although Davis was originally supposed to meet her daughter after she’d moved into her room, she surprised Moshier by showing up in a wheelchair while they were in line on Columbus Avenue.

“I’m proud of all of us, happy for my girl, and loving Fordham,” said Davis.

“I’m excited, and I feel slightly embarrassed, but it’s not too bad,” Moshier said, laughing. “Nothing keeps momma away,” 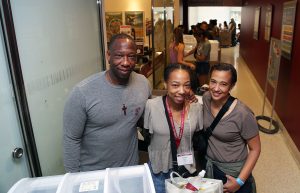 Joana Riley, a native of Las Vegas, came to the Lincoln Center campus to earn an Ailey/Fordham BFA.

“I’m excited, and a little nervous. It’s new and far from home, but dance is something I love doing, so I’m going to pursue it for as long as I can,” she said.

Riley was dancing before she could really walk, her mother Daria Peoples said.

“She was good at it, she enjoyed it, it made her happy, it made her joyful. I’m glad she found something she loved to do so early in life,” she said.

A New World, Just a Subway Ride Away

For Anne Sullivan, science has always been “that one subject that just clicks” for her. That’s part of why she decided to come to Fordham College at Rose Hill, where she’s planning to study biological sciences, astronomy, or medicine. Sullivan, who will be commuting to campus from Manhattan, said that she’s extremely “excited about the academics” Fordham has to offer. 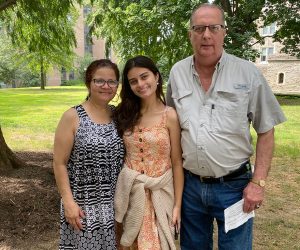 “I like the idea that she’s on sacred ground—it’s a Jesuit university—and of course the recognition, he said.

Her mom, Debbie, said that she’s a little emotional about her daughter starting college.

“I’m so proud of her, she made very good marks in high school,” she said.

Podokashik, who grew up in Mill Basin, said four years of participation in Model UN in high school had piqued her interest in global politics. 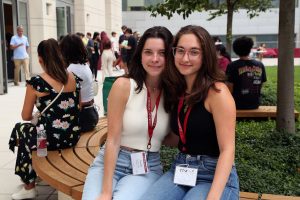 “It was interesting to see how the U.S. influences other economies, and I wanted to study this in college. Fordham has an incredible business school, so I’m here,” she said.

She’s going to commute to the Lincoln Center campus from Manhattan. She’s thrilled that Stepankovsky, who hails from Sheepshead Bay, Brooklyn, is also in her program.

“I feel like I’m so lucky to have a friend that’s coming into this new part of my life,” she said.