skip to main content
Return to Fordham University
You are at:Home»Colleges and Schools»Fordham College at Rose Hill»Fordham Mourns Alumnus Elmer Brunsman: Teacher, Activist, University Aficionado
Elmer Brunsman delivers his final presentation at Fordham. Photo by Bruce Gilbert
After a weekend spent reminiscing and celebrating with former classmates, Elmer F. Brunsman, FCRH ’63, died in O’Hare Hall, where he was staying for Jubilee Weekend. He was 77 years old.

“Mr. Brunsman was a great teacher and storyteller, and an active participant in Fordham alumni events: He had in fact given a presentation on Fordham College in the 1960s to his classmates on Saturday afternoon,” said Joseph M. McShane, S.J., president of Fordham. “Our hearts go out to Mr. Brunsman’s family, classmates, and friends today.” 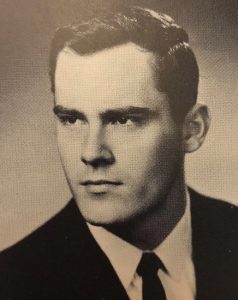 Not only did Brunsman organize a presentation at Jubilee this year, but he had organized a panel plus an exhibition of class ephemera for Jubilee 2013, when the Class of 1963 celebrated their Golden Jubilee.

Described as the “beating heart” of his class, Brunsman’s passion for Fordham sprung from his experience as editor-in-chief of The Ram and as a member of the Fordham Club, said John Sexton, Ph.D., FCRH ’63, president emeritus of New York University.

“There were a lot of smart people in that class, but he was smart in a way that was special, dedicated to what I call the common principle of the community of Fordham,” Sexton said.

Sexton said Brunsman was “always his own person,” comparing him to the eccentric and brilliant character of Doc from the movie Back to the Future.

“He came to physically look like Doc, and in the wonderful way that Doc was eccentric, that was how dedicated he was to the community of Fordham,” he said. “He worked tirelessly at creating a community again, 50 and 55 years later.”

Indeed, even up to his last days, Brunsman was deeply involved with the University, calling on staff from Development and University Relations to fine tune text and design of the report he was presenting, to say nothing of seating arrangements.

“He was quirky and did things his own way. He was not a slave to fashion. Even his passion for Fordham was unique,” said Paul C. Saunders, FCRH ’63. “I don’t know anyone else who felt that passionate about Fordham.”

Brunsman was no less passionate in his endeavors outside of Fordham. He worked as a teacher in the Washingtonville and New Paltz school districts and held a host of other roles that shored up his reputation as an original Fordham personality.

“In addition to being an early Peace Corps volunteer, Elmer was one of the pioneers who helped to launch Greenpeace, taking charge of their media and public relations work,” said Lance Strate, Ph.D., professor of communication and media studies at Fordham. “He was a gifted media professional, scholar, educator, and activist who strived to make our world a better place, and succeeded.”

Brusman lived for 25 years in San Francisco, where he worked in talk radio, public relations, television, and, early on, as a ship’s clerk, before returning to New York to teach. Mark Neville, FCRH ’68, recalled working with Brunsman, known as Terry to close friends, on the San Francisco docks directing longshore gangs.

“It was extraordinary to meet up with Terry just a few months after graduating—there were not many Fordham people out in San Francisco in 1968, and certainly none were on the docks,” said Nelville. “He was just such a magnetic guy. We had both been in student government and shared a love of Rose Hill and an abiding admiration for the Jesuits who had helped shape us. Eric Hoffer notwithstanding, we were the best-educated ship’s clerks on the docks, I am quite sure.”

On his final day on campus, Brunsman was seen taking dozens, if not hundreds, of photos; taking notes; and smiling broadly. Several saw him at Mass in the University Church and said he looked at peace. Sexton said he saw Brunsman “perambulate among the tables” at dinner.

“He was soaking in the joy of it,” said Sexton. “He was a participant, but not a shaping participant; he was taking his joy in listening to the words of others, he was back being a reporter for The Ram.”

Saunders said he received about a dozen emails after Brunsman’s passing. “Almost everyone said, ‘If he had to die, this was the time and place he would have chosen. He got through the reunion and the events. He died with his boots on, he died doing what he wanted to do, and in the place he wanted to do it.”