skip to main content
Return to Fordham University
You are at:Home»Colleges and Schools»Fordham College at Rose Hill»Fordham Honors Students Get a Look at South Bronx History Through the People’s Eyes
Author Carolyn McLaughlin (left) and first-year student Julian Navarro discuss McLaughlin’s new book. Photos by Kelly Kultys
When Carolyn McLaughlin retired as the executive director of BronxWorks, she wanted to document some of the community work done during the span of her 50-year career in the borough. After getting in touch with an editor from the University of California Press, however, the community activist quickly expanded her idea and ended up writing a journalistic history called South Bronx Battles: Resistance, Resilience, and Renewal.

“It gave me a chance to dispel some of these negative terrible stereotypes about people in the South Bronx,” she added. 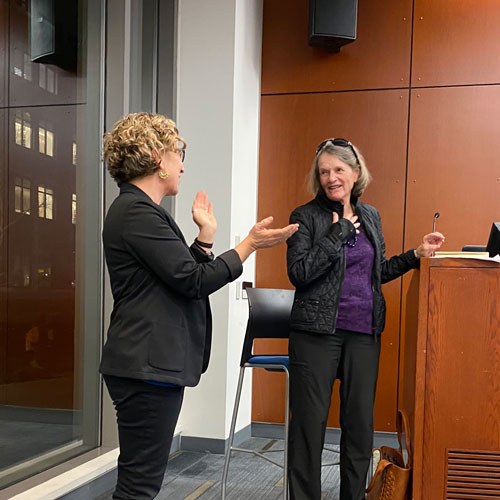 The book includes stories of resilience, such as Evelina Lopez Antonetty’s work in bringing summer meal programs to the Bronx for students when they were out of school. And it tells stories of activism, such as resident Kathryn Speller’s work in marching against hospital closings and organizing tenants rights groups.

The class stems out of a new honors program curriculum, launched in fall 2019, that aims to educate a community of scholars for justice and among other things, teaches students about the history and culture of the community, said Eve Keller, Ph.D., professor of English and honors program director.

The effort extends to faculty as well, Keller noted. “This is part of an honors program project to become better citizens of the neighborhood in which we live and work,” she said.

The event was the second in a series of talks about the borough that the honors program has hosted. The first, “The State of the Health of the Bronx,” was held on Tuesday, Feb. 11, and featured Dr. Jane Bedell, the medical director of the Bronx Neighborhood Health Action Center, and Kim Freeman, manager of the Tremont Neighborhood Health Action Center.

Learning from the Community

Honors students in the audience asked McLaughlin about her work in the borough, the history of the South Bronx, and what it looks like today.

Many of them said they enjoyed how she told the history of the area through the eyes of local residents.

“I appreciated that you quoted really mostly community members, and people you knew personally and people who spoke about their own problems, experiences, ideas, and solutions. In our college courses, we really do more often read the work of academics and officials, but you tell the stories of real people’s experience,” said Amelia Medved, a first-year student..

McLaughlin said she wrote it that way to amplify the voices of those who might not be considered the “experts” or “officials.”

“It wouldn’t make sense for me to write an academic history book. What I wrote was really like a people’s history,” she said. “I featured people who I knew, I liked, I admired. I thought their stories should be told.”

She also helped people in attendance understand the wide variety of factors that impacted the South Bronx community during the 1970s and 1980s, including the flight of white and middle-class residents, a lack of a social service infrastructure, landlord issues, redlining, and Robert Moses-led construction projects like the Cross Bronx Expressway.

“The ‘70s were really a hard time in New York City—the city was facing bankruptcy,” she said. But the factors above, which were particularly prevalent in the South Bronx, led to the area being “the poorest congressional district for 30 years.”

When her agency, which eventually became known as BronxWorks, first started in the early ‘70s, she said they were a “two-to-four person storefront,” but everyone flocked to them because they were the only ones in town. Since then, she said their work expanded to address children and youth services, immigrants, homeless individuals, families, people with HIV/AIDS, working-age adults, and senior citizens.

McLaughlin said that the group’s work continues as they address new challenges, including ongoing development and potential gentrification, which she called a very “hard issue.”

“I think [Mayor Bill de Blasio] feels, as a lot of people do, that the city has to have more housing and that it’s the lack of housing that’s driving up prices,” she said. “People in the Bronx, some of the people really welcome some of the new buildings and want there to be a larger middle class in the Bronx.”

On the other hand, she said there’s this feeling that many of the projects are “luxury” buildings that will drive people out of their homes and neighborhoods.

“You build buildings and people with higher incomes come in and then stores start catering to them and commercial landlords start raising their rents on the stores, the mom and pop businesses go out of business as more high-end stores come in,” McLaughlin said. “Those high-end stores also may be less likely to hire community residents and then that also has a ripple effect to other apartment buildings.”

Still, despite its challenges, McLaughlin said she hopes that the book shows the strength of the Bronx and its people.

“The Bronx has always been home to a diverse group of immigrants,” she said, highlighting that all groups live together, instead of in separate sections, such as Chinatown or Little Italy. “It’s different in the Bronx than other places. In the Bronx, the immigrants are diffused throughout the populations—it’s much more mixed. I think that’s really been a strength of the Bronx.”