skip to main content
Return to Fordham University
You are at:Home»Colleges and Schools»Fordham College at Rose Hill»Enemies to Allies: A Rabbi and a Palestinian Activist Share their Story
Rabbi Hanan Schlesinger and Shadi Abu Awwad at Keating Hall on Thursday, Nov. 1, 2018. Photos by Taylor Ha
It was an unusual sight: a silver-haired rabbi and a 27-year-old Palestinian activist, shaking hands and smiling at each other in the same room.

The rabbi is Hanan Schlesinger, a Zionist settler who once viewed Palestinians as less than human; the young activist is Shadi Abu Awwad, a Palestinian who grew up hating Israelis. For decades, their countries have claimed ownership to the same land, leading to hostility, hatred, and hundreds of deaths on both sides. But after these two men forced themselves to get to know their neighbors, they reached a simple, yet striking realization—their “enemies” are humans who live, love, and bleed, just like them, they said.

“How could it be that I have lived my life in an area where there are probably nine Palestinians for each Israeli, and for 33 years, I never really met even one Palestinian?” Rabbi Schlesinger admitted to Fordham students, faculty, and guests at the Rose Hill campus last week. “I want to tell the story of how I think that happened … and how that can change.”

The two men shared their stories in a lecture called “A Painful Hope: Seeing the Humanity of Your Enemy,” hosted by Fordham’s peace and justice minor program and Chief Diversity Officer Rafael Zapata, at Keating Hall on Nov. 1. They also spoke about Roots, their organization that has facilitated conversations between Israelis and Palestinians since 2014. Rabbi Schlesinger is Roots’ international director; Abu Awwad is a youth group leader. 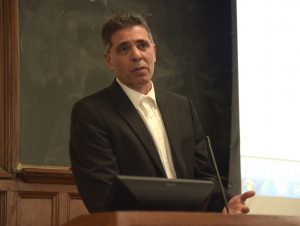 Roots is the only organization of its kind in their region, said Samuel Muli Peleg, Ph.D., a longtime peace activist and faculty member in Fordham’s peace and justice studies program.

“Because they are from the West Bank, the most contested area where the friction between Israelis and Palestinians is the biggest,” explained Peleg, “they are the most genuine [peacebuilders].”

“I see it again and again—Palestinians and Israelis coming to our center with hesitancy, with fear, like there’s a red line in the sand,” Rabbi Schlesinger said, his voice rising in a crescendo. “But when the meeting takes place, I often see a sense of liberation on people’s faces, as the fear dissipates, and the disease begins to be healed, and people become, in my mind, whole … and a little bit more human.”

Rabbi Schlesinger lives in a Zionist settlement in the West Bank, a territory to the east of Israel. In 1967, Israel took control of the West Bank, along with its 2.6 million Palestinian residents. To the Palestinians, the West Bank is stolen Palestinian land. But to Rabbi Schlesinger and his kin, the West Bank is “Judea and Samaria”—the homeland of the ancient Jewish state, he said. It’s the home of many sacred sites, burial areas, and, ultimately, Jewish heritage. If you scrape away the dirt outside his home, he added, you might unearth ancient potshards from his ancestors thousands of years ago.

“When I drive on the roads of Judea, when I walk in the fields, I see the return of the Jewish people to our ancient homeland after 2,000 years of exile. It was only in 1948—three years after the Holocaust ended—that we finally created one little dot [Israel] on the map,” Rabbi Schlesinger added. “What could be more just than that?” 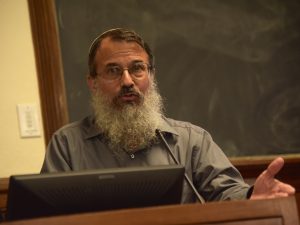 For 33 years, he had viewed Palestinians as background noise, “the gray, drab scenery that passes in the background of a movie, but is not part of the plot,” he said. Four years ago, that narrative changed.

He met Jamaal, a Palestinian man from the town of Beit Ummar. Jamaal told him how Israeli soldiers had made his childhood miserable; how, after shaking hands with an Israeli man, he had run to the bathroom to wash away “the filth of touching an Israeli”; and how he had considered Palestinians who attended interfaith meetings to be traitors. But after hours of meaningful conversations with other Israelis—after “seeing that there’s a human being and a partner on the other side,” Rabbi Schlesinger recalled him saying—Jamaal’s perspective changed.

Rabbi Schlesinger met more Palestinians, and listened to many more stories: a man whose mother was beaten before his eyes by an Israeli, a Palestinian whose brother was shot and killed by Israeli soldiers, a group of Israeli and Palestinian mothers who mourned their murdered sons together. He came to a conclusion.

“In living out my life on the basis of only one truth—my truth, and ignoring theirs—I was trampling their rights,” Rabbi Schlesinger told the audience. “Both sides in this conflict are living out identities at expense to the other side, causing injustice, pain, suffering, and death.”

“Neither side is gonna get up and leave. We have to get beyond what I call the ‘hubris of exclusivity,’ as if it’s only us. It’s both of us—together.”

Abu Awwad’s childhood taught him two things: Fear is not an option. And, once you leave home in the morning, there’s no guarantee that you’ll return home alive.

“That was more than enough for me as a child to start to hate Israelis,” said 27-year-old Abu Awwad, who grew up amid the Israeli-Palestinian conflict.

When Abu Awwad returned home, he was angry and disoriented. He despised Israelis, he said, but how could he extend that hatred to the woman who had helped his family? As time passed, his animosity began to dissipate. He visited peace camps, befriended Israelis, and came to a realization: “They [Israelis and Palestinians] are killing each other because they are afraid of each other,” he said. “Now what’s controlling the conflict is fear.” 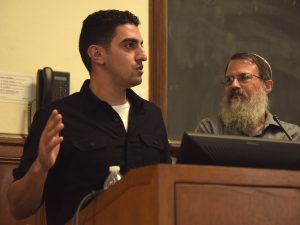 Shadi Abu Awwad speaks about his childhood amid the Israeli-Palestinian conflict.

Abu Awwad recalled a day when he was driving across a junction. He had spotted an Israeli woman who wanted to cross the street, and slowed his car down. But when she saw his Palestinian license plate, she stopped in her tracks. She’s afraid that I will hit her, he thought. Then a nearby Israeli soldier cocked his gun. If I continue driving, Abu Awwad wondered, will he shoot me? If I don’t move, will he think I have a bomb in my car—and still shoot me?

“I’m afraid. He’s afraid. She’s afraid. The three of us could be killed for nothing—just because we are afraid of each other,” he said. “Is this the life that we want?”

Today, he is a youth leader and peace activist at Roots. Every month, he facilitates meetings between teenagers from both sides of the conflict, ages 15 to 18. At this age, he said, the young Palestinians gather in the streets and throw stones at Israeli vehicles and are shot and killed; meanwhile, the Israelis enlist in the army and stand against the Palestinians.

“How can we let them do that without even knowing anything about each other?” he asked. “Talk to him before he has a weapon in his hand. Tell him who you are. Tell him why you have to be in the army. Let him think about it from your eyes.”

He said the solution to the Israeli-Palestinian conflict will come from the people—not the government. Therefore, he added, nonviolence and organizations like Roots are key.

“I don’t think that I will see peace in my life,” Abu Awwad admitted. “But I’m sure that what we are doing, one day, will help the people who are gonna live in that land. We never know when. But it’s enough to believe in what we are doing right now.”