skip to main content
Return to Fordham University
You are at:Home»Colleges and Schools»Encaenia Honors Rose Hill’s Most Gifted Scholars

The class of 2017 at Fordham College at Rose Hill (FCRH) filled the Rose Hill Gymnasium on May 18 to congratulate some of the school’s students on being inducted into top academic honor societies and earning prestigious awards, fellowships, and scholarships during their time at the University.

But the 2017 Encaenia ceremony of academic excellence wasn’t short of humor—thanks to the Lord of Manor Liam Paris.

Paris, who was tasked with delivering a playful address about his memories as a Ram, told the crowd that he first wanted to go to Fordham because of its reputation and “perfectly manicured flowers” in front of McGinley Center. He also couldn’t resist the opportunity to be a part of the “Ramily”—though he did have some gripes with the name.

“We have so many beautiful mantras—AMDG, Cura Personalis, “set the world on fire”— [but]Ramily?” he said. “Just change one letter? [We] couldn’t even put it in Latin?”

Ultimately, Paris said he couldn’t imagine being anywhere else, as he recalled spending time at “Eddies” during the spring months.

“Albeit, I’m watching from under the shade of that tree by Freeman [Hall] while I slather on SPF 2 billion,” he teased. “But there’s never a stronger moment where I look out and am reminded that I am surrounded by the some of the most talented and awe-inspiring people I’ve ever met, and we’ve all got a shared experience together.”

Class valedictorian Jennifer Rutishauser, a double major in biology and history who is graduating with a 4.0 GPA, said attending Fordham allowed her to step out of her comfort zone. She shared how a contemporary history class taught by Assistant Professor Christopher Dietrich, Ph.D., enriched her academic experience and sparked her interest in history.

“I’m sure we all had professors like this who had a particular impact on us, who helped us find our way, inspired us, pushed us, and encouraged us to grow,” she said.

In addition to being a part of a community where it was “cool to be involved in campus ministry” and participate in social justice initiatives at community spaces like POTS and the Rosedale Center, Rutishauser said Fordham was also a place where students lined up an hour in advance at the Black Box Theater just to get a seat for a show, cheered on their on their favorite University dance crew, and watched the Ramblers serenade “unsuspecting students and professors on Valentine’s Day.”

“Fordham has shaped me and all of us in many ways, but the most significant reason my experience at Fordham has been life changing is because of all of you,” she said.

Two students received special awards from Maura Mast, Ph.D., dean of Fordham College at Rose Hill. The Claver Award, which is granted by the Jesuits of Fordham to a FCRH senior who best represents Fordham’s dedication to community service, was given to Madelyn Murphy. The Fordham College Alumni Association Award, which recognizes a FCHR senior who embodies the “Fordham spirit,” was awarded to Emma Bausert.

As the graduating seniors prepared for the next chapter in their lives, Dean Mast asked them to reflect on St. Ignatius Loyola’s Prayer for Generosity, which was handed out to attendees on a card before the ceremony began. 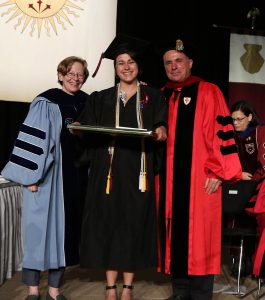 Madelyn Murphy (center) was the recipient of the Claver Award. Photo by Michael Dames

She encouraged them to be generous in their pursuits and not “count the cost” when they give.

“What if you are guided by this prayer? What if you live a life of generosity, of service, of giving?” she asked.

She told the graduates that they could transform the world with those principles.

“You are each called to something different, to something worthy,” she said. “There is no owner’s manual, there is no roadmap. You have to make the path by walking it.”