skip to main content
Return to Fordham University
You are at:Home»Colleges and Schools»Fordham College at Rose Hill»Bronx Students Have New ‘Visions of the Good’ After Fordham Summer Program
Students from high schools across the Bronx graduate from Fordham’s Visions of the Good summer program. Photos by Bruce Gilbert.
Sixteen students from Bronx high schools graduated on July 26 from a new summer program at Fordham called “Visions of the Good in the Bronx,” which aimed to teach them about philosophy, college life, and more. 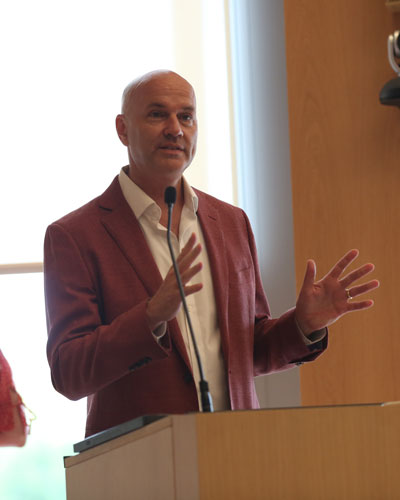 The program, which focused on students from the Bronx, particularly those from underserved communities, was made possible through a $300,000 Knowledge in Freedom Grant from the Teagle Foundation.

Stephen Grimm, Ph.D., who served as the director of the program, said he gave the students three pieces of advice throughout the program: Be curious, be humble, and be ambitious.

“And I’m pleased to say that it happened wonderfully,” he said during the graduation ceremony that included the students’ families. “My biggest hope is that in 15 to 20 years, one of these students will be standing here, will be directing this seminar.”

For many of the high school students in the program, this was the first time they had ever studied philosophy. 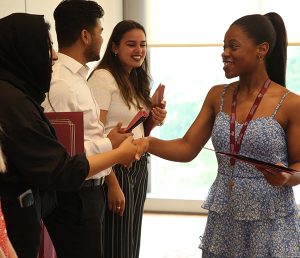 “I didn’t really know much about it, and now that I do, it’s something I am considering majoring or minoring in,” said Newone Samuels, a rising senior at St. Catherine’s Academy. “It gave me a new way of thinking. I’m very open minded on certain different situations now.”

She added with a laugh that her favorite philosopher is Socrates because she loves “how he sees life and how he deals with situations in his own way.”

Oscar Massey, a rising senior at Cardinal Hayes, said that he saw pretty quickly how he could utilize the critical thinking and debate skills he has learned from philosophy.

“Studying philosophy made me realize that although I didn’t know philosophy itself, I actually practice philosophy in everyday life,” he said. “If I’m talking about sports or video games, everybody has a little debate sometimes, so it was really cool to be able to understand and to learn from some of the greatest philosophers.”

Jaydee Cantos, a rising senior at Bronx Latin, said that she felt like the program pushed her to expand her mind and to do things she wasn’t always comfortable with, such as speaking out during class.

“I was kind of already open-minded, but with the philosophy class, it made me more open minded to look at everybody’s perspective and not be biased,” she said. “And even with this program in general, it puts you out of your comfort zone to meet a whole bunch of different people. In high school, you need that to make connections.”

The three-week program included a mix of academic, social, and college-prep components. Students lived on the Rose Hill campus at Loyola Hall during the week. During the day, they took philosophy classes with Grimm and other professors, including Vita Emery, Ph.D., a postdoctoral fellow. 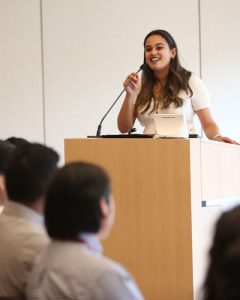 “For me, one of the coolest things was we would have discussions in the classroom, and then if I went to lunch with them, or later in the afternoon, they would still be talking about some of the debates we had,” Emery said. “They would be using [philosophy]to prove points to each other and that was really cool to see that they were having fun in the classroom, which is the point. They’re having fun learning.”

In the afternoons, they worked with four Fordham students who served as resident teaching assistants (RTAs). The RTAs helped them not only with their class assignments, but also with proofing resumes, filling out job and college applications, and understanding college life.

“We conducted small groups where people shared their feelings, discussed affirmations about themselves and their personal goals, and talked to us about college,” said Suzan Juncaj, a rising Fordham College at Rose Hill junior, majoring in international studies and minoring in French. “They have a lot of questions as high schoolers, and for some of them, we’re their only mentors who have college experience.”

Laura Rodriguez, a rising junior in Fordham College at Rose Hill who is majoring in psychology and minoring in philosophy, emphasized that Grimm chose residential teaching assistants not only based on their studies and their mentoring experience, but also on whether they had similar backgrounds to the students in the program. This helped create meaningful relationships, she said.

“One thing I think Dr. Grimm did really was getting RTAs that were originally from the Bronx or from the New York area,” she said. “I think that really helped us connect with them more fluently, and especially with most of us being minorities and them being minorities—if they see people who look like them they’re more inclined to relate to us.” 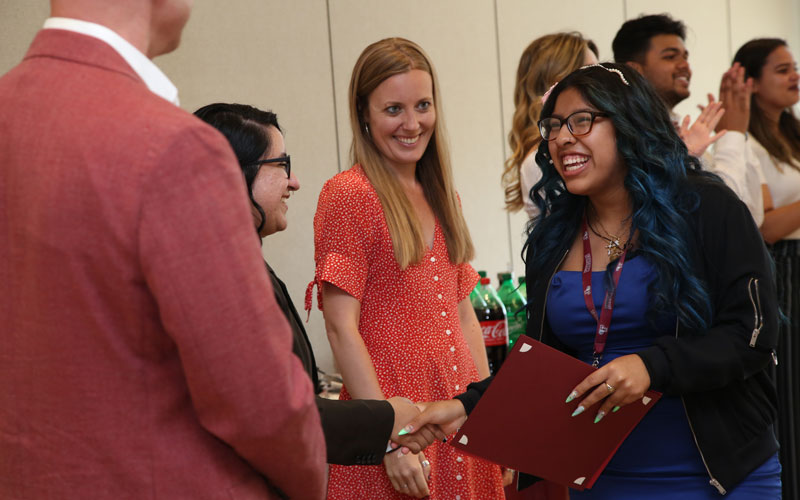 Jaydee Cantos, a rising senior at Bronx Latin, graduates from the Visions of the Good summer program.

There were also field trips to local institutions, such as the New York Public Library, and guest speakers that included other professors from different disciplines as well as representatives from the Office of Undergraduate Admission.

“The most impactful thing from [the guest speaker sessions]was definitely the mentoring—we got to meet a lot of professors on campus,” said Joshua Persaud, a rising senior at Cardinal Spellman, adding that it pushed the students to think about what they’d like to major in.

In the evenings, the students had the chance to socialize, both with each other and students from other schools, including students from a Columbia summer program who they beat in a kickball game on Eddies Parade.

The high school students said that the program helped them not only gain philosophical and academic experiences, but friendships and a sense of what college could be like.

“You get to make new friends, and experience things differently, and have fun on campus,” Samuels said. “I’m still the same person, but staying here has given me a sense of freedom and I feel like I’m definitely going to be ready for college.” 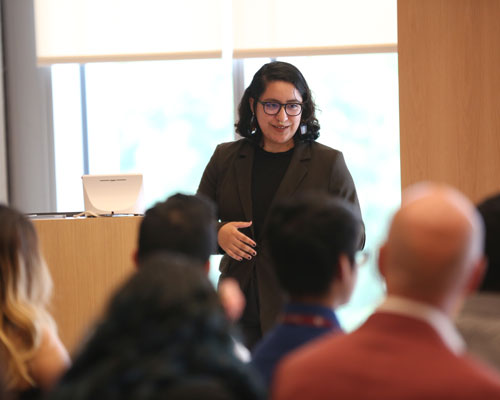 Layla Mayorga, a second-year Ph.D. student in philosophy at Fordham

Layla Mayorga, a second-year Ph.D. student in philosophy at Fordham, who served as a graduate student mentor for the program, said that she hoped they learned from this experience.

“They’re first-generation [students], so I think it’s a good experience to know what college life is, and what it is to read college materials, and that it’s not that different from high school, and that philosophy is always everywhere.” she said.

But the high schoolers weren’t the only ones who had takeaways from the program. Nazeath Emama, a 2022 Fordham College at Rose Hill graduate who majored in math and anthropology and will be continuing her studies at the Graduate School of Arts and Sciences, served as a resident teaching assistant for the program and said that she loved getting to connect with the students.

“The kids call us older siblings, like big sister, big brother type vibes,” said Emama, who did a similar program at Columbia while she was in high school. “I really appreciate that they said that we were like their siblings, because those are people that you look up to, those are people you ask actual questions to without being fearful of getting judged.” 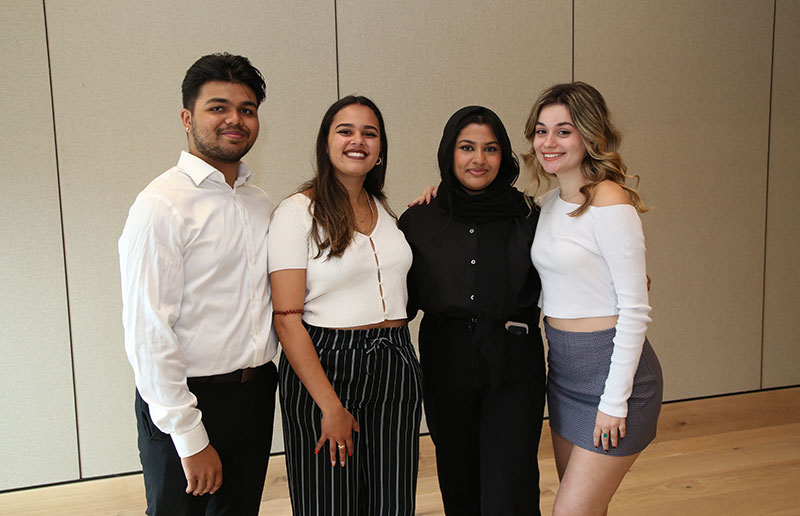