skip to main content
Return to Fordham University
You are at:Home»Colleges and Schools»Fordham College at Rose Hill»An American Student Who Became a Full-Time Londoner
Reception photos by Taylor Ha; other photos courtesy of Brianna Miller
When Brianna Miller decided to study abroad at Fordham London, she didn’t know that four years later, she’d still be living there—with a full-time job and a flat to call her own.

“It was nerve-wracking to move to another country that was eight hours away and not know anyone,” said Miller, who studied in London in 2018 and now works as a senior researcher at the Tony Blair Institute for Global Change, a policy think tank. “It was a challenge, but a rewarding one.”

Miller was born in Maryland and raised in New Jersey. She first attended Syracuse University, but later transferred to Fordham College at Rose Hill when she realized the latter was a better fit. She said she was drawn to the Rose Hill campus, which resembled the classic ivy-covered colleges she had seen growing up. The campus was also in New York City—her favorite city at the time. That initial attraction grew deeper when she visited her cousin Gabrielle Mascio, GABELLI ’18, at Rose Hill. 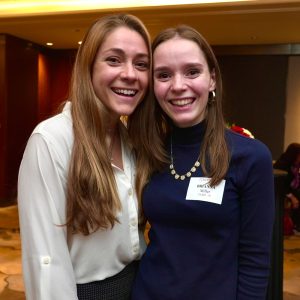 Miller and her cousin Gabrielle Mascio, GABELLI ’18, at an alumni welcome reception for President Tetlow in London last October

“When I was a senior in high school, she was the coolest thing: a college freshman. I visited her on campus and got to really experience Fordham,” said Miller. “Initially, I didn’t consider it because I wanted to be far away from home, and Fordham wasn’t within the radius that I had in mind. But I think you end up where you’re meant to be.”

Miller once wanted to become the first woman president of the United States. She tested that ambition in high school, where she served as student council president. But as she grew older, she realized she was less interested in the world of politics and more interested in shaping policies.

“The part of me that wanted to be president wanted to do something like that because I wanted to feel like I was making a difference. But you can still do that with writing. You can sit down, think about big issues, and work out solutions for the government or private companies,” said Miller, who is getting a taste of that at the Tony Blair Institute, where staffers write about politics in the U.K. and develop recommendations for British policymakers. 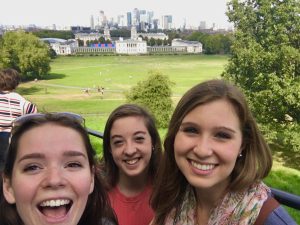 Miller and her Fordham London roommates in Greenwich Park

Part of what prepared her for her job was her last semester at Fordham, which she spent at the University’s London campus. She lived in a first-floor flat in Maida Vale, a neighborhood in north London that reminded her of the brownstone neighborhoods in Manhattan. On a typical school day, she would ride the bus from her apartment to Fordham London—a six-story building that opened in 2018 and features modern classrooms, a spacious student lounge, and a rooftop terrace. Several days a week, she commuted to her marketing internship at the Aid & International Development Forum, an organization that spreads awareness about key humanitarian issues. After class, she frequented London bars and restaurants with her new friends. Like many of her classmates, she also traveled to other parts of Europe on weekends, including France, Sweden, and Scotland, where she found a world beyond her home in New Jersey.

“My study abroad experience in London showed me that the world is so much bigger than my life at home in New Jersey and in the U.S.,” said Miller, who also studied abroad in Granada, Spain, for one semester. “New York is a multicultural city, and you see just as many types of people in London as you do in New York. But being in a different country, meeting people who have never been to the U.S., and learning about politics outside of the U.S. has really opened my eyes to different perspectives and ways of thinking.”

Navigating A New Job Abroad During the Pandemic

Miller loved her life in London so much that after she graduated with her degree in communication and media studies from Fordham College at Rose Hill in 2019, she headed back across the pond to the London School of Economics and Political Science, where she earned her master’s degree in international social and public policy. A few months later, she began her first full-time job at the Tony Blair Institute.

She started working during the first year of the COVID-19 pandemic, but said she made the most out of an unusual situation.

“Our team published a lot of papers about mass testing and being prepared for the vaccine rollout. I think the government actually took into account a lot of our policy recommendations, so that was really exciting,” said Miller, who was promoted to senior researcher at TBI after a year and a half of employment. “I love being part of an organization whose mission is to make positive change. You may not be the person authoring a paper or speaking to the media about it, but all our work is going toward a common goal: providing policy solutions to governments in challenging times.” 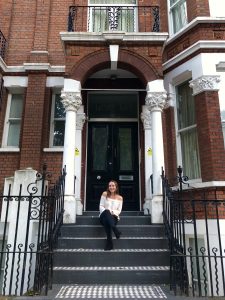 Miller in front of her Fordham London apartment

It’s been four years since Miller first studied abroad in London, and she says life looks different in the U.K.

“Now when I go home, it’s not the same,” she said. “Cars are on a different side of the road. The culture between the U.S. and the U.K. is also different. No Thanksgiving in London, but there’s a Sunday roast and different holidays like Guy Fawkes Day in November.”

If Miller lives in London for two and a half more years, she can become a permanent resident. At this rate, she says, it seems like that will become a reality. Even her family says that her accent is starting to sound like a native Londoner’s.

“I don’t see it, but my family makes fun of me. Sometimes I’ll say bins instead of garbage, and they’re like, ‘Oh my gosh, you’re British now!’” she said, laughing.