His wife, Fulvia Masi, who received her Ph.D. from the Graduate School of Education in 1987, described her husband using the title of one of his favorite books—The Passion of the Western Mind by Richard Tarnas.

“Just the title phrase says everything about my husband’s great mind,” she said.

“My husband was literally bigger than life,” she added. “He loved classical music, but also pop music … He was a great traveler—everything about him had to do with literature, music, geography, traveling, history, you name it.” 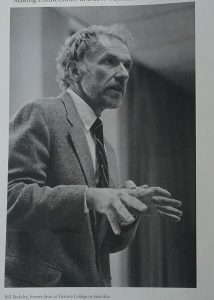 “He was an interesting guy with very interesting ideas, and he was also very brave,” said Edward J. Bristow, Ph.D., former dean of Fordham College at Lincoln Center and current professor of history at Fordham. “Bill was a private person, but once you got to know him, he was fascinating.”

Both Masi and Bristow noted Tanksley’s bravery and strength in overcoming personal tragedy—his first wife was killed in a car accident with Tanksley and their children in the car, according to Masi.

“As I got to know him, I realized how brave he really was to pull himself together and move on,” Bristow said.

Tanksley, Ph.D., was named the fourth dean of what was then the College at Lincoln Center by the University’s then-president, Joseph A. O’Hare, S.J., on July 1, 1985. He worked to build up the Lincoln Center campus at a time when it faced declining enrollment and offered no residential facilities.

Three of his biggest visions for the college were accomplished years after he left in June 1989: opening a residence hall at Lincoln Center (McMahon Hall opened in 1993); bringing business programs to the college (the Gabelli School’s Lincoln Center location opened in 2014); and improving collaboration between Rose Hill and Lincoln Center (which now enjoy many partnerships.)

During his tenure, he developed the College at Lincoln Center Advisory Board, which helped connect alumni back to the school and helped future deans develop connections in the city.

Tanksley graduated with a degree in English from Gonzaga, a Jesuit university in Washington, before earning his M.A. and Ph.D. in English and American literature at the University of Illinois. He worked at multiple colleges, including Victoria College in Melbourne, and was the director of academic affairs at Penn State before taking the job at Fordham.

When he was hired, Tanksley told The Observer that he wanted to return to a Jesuit institution “because there is a sense of purpose that I think a lot of secular institutions lack,” according to A History of Fordham College at Lincoln Center, written by Robert Grimes, S.J., former dean of the college, in 2018.

In a University viewbook published during his tenure to help increase enrollment, Tanksley described the college as “clearly in the middle of things—an engagement of time and place.”

“Our cornerstone is set in the heart of Manhattan, the energy center of the world,” he wrote. “Our curriculum is intimately plugged into the abounding sources and resources surrounding us … We have a very special structure here, inviting many new ways of making connections—linking students to each other, to the faculty…and bridging from the college to the larger dynamic community in our front yard.” 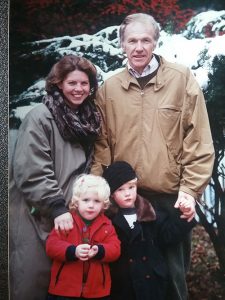 William Tanskley and his wife Fulvia Masi with their children

Masi said that this fit in with her husband’s personal side, which was also interdisciplinary in nature.

“We talked about music or literature—of course that was his field,” she said. “But sports—he loved to play basketball. He was also interested in watching those games on television. His favorite basketball team was definitely Gonzaga, because that was his alma mater.”

In 1986, Tanksley hired Bristow as an associate dean of the college, a hire that Grimes noted was “an appointment the significance of which would not be fully realized for many years.”

Bristow said that Tanksley allowed him to gain a wide variety of experience and knowledge as an associate dean.

“He delegated substantial authority, and I think he hired me with the intention of working on certain things. To be associate dean in those years was really interesting—not only because of Bill’s administrative style, but because at that point the College at Lincoln Center was a very different sort of institution,” he said.

At that time, Bristow said, the campus operated pretty separately from the Rose Hill campus, and the dean was in charge of almost everything, from academics to recruiting to adverstising, as well as managing both the undergraduate and adult learning program.

After Tanksley left in 1989, the University named Gerald Quinn as dean of the college. When Quinn died tragically in a car accident in 1991, Bristow took over as dean. During his tenure he oversaw the opening of a residence hall on campus, developed an honors program, and most significantly, helped create the highly regarded Bachelor of Fine Arts program with the Alvin Ailey American Dance Theater.

Grimes noted in A History of Fordham College at Lincoln Center that this partnership would not have been possible without the groundwork laid by Tanksley.

“Without the contributions and encouragement of Bristow and Mort Levy, chair of the college’s Board of Advisers (both appointees of Dean Tanksley), the Ailey-Fordham collaboration may never have come to fruition,” he wrote. 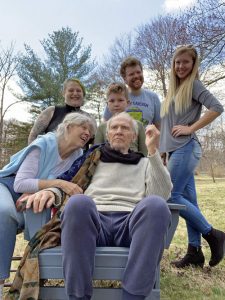 William Tanskley and his wife Fulvia Masi with their children

“These are people who helped subsequent deans in all sorts of interesting ways,” he said. “For example, we created the Bachelor of Fine Arts program on my watch, but I inherited Bill’s Board of Advisers and they were of immeasurable help putting the program together—they were so well connected.”

Clara Rodriguez, professor of sociology who was named to the advisory board by Tanksley, said that the group’s dedication to helping enhance Fordham College at Lincoln Center was unheard of.

“The amount of commitment, devotion, and love—I haven’t used that term very often—that the members of the board who were graduates of the college had was astounding,” she said. “I have served on many boards, and the degree of commitment that they brought to the board was always impressive.”

Fordham would remain a part of Tanskley’s life after his deanship, not just because he remained a professor in the English department for many years, but also because it’s where he and his wife met, and where his son later attended college.

While getting her Ph.D., Masi was teaching Italian at a charter school and got an idea for an exchange program between Fordham and a university in her home country of Italy. After submitting a written proposal and discussing it with faculty members, she submitted it to Tanksley’s office. 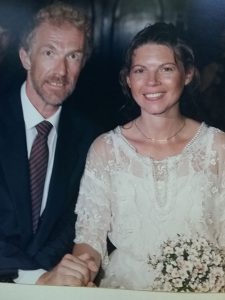 William Tanksley and Fulvia Masi on their wedding day.

“He said that he was busy and that he never read (the written proposal),” she recalled. “But he said, ‘Well, let’s have lunch together and we’ll talk about it, and that was the beginning.”

They kept in touch for six months primarily through letters and cards since they didn’t have time to see each other.

“I told him very bluntly, ‘I don’t have time to do this,’—I was pushing him away at the beginning. That was November,” she said with a laugh. “In April, I said, ‘OK, why don’t we see each other in person a little more?’ The first date was a car ride between Fordham and Woodstock and we decided everything—including our wedding date, July 7, 1987, and the name of our first child.”

Masi said she’s kept those letters and memories close to her heart especially in the last year, when she became Tanksley’s full-time caregiver.

Tanksley is survived by Masi and the couple’s two children: Mosa Tanksley and William Tanskley. William Tanskley is also a Fordham alumnus, graduating from FCLC in 2010.