“The Observer has played a tremendously important role throughout the pandemic by keeping all of our students connected to campus, no matter where they’ve been living,” said Laura Auricchio, Ph.D., dean of Fordham College at Lincoln Center. “I’m hugely grateful for their commitment and proud of the character they have demonstrated at every turn.”

This year marked a historical milestone for The Observer, which celebrated its 40th anniversary by creating a special online edition about its history, current members, and alumni who are now working as full-time journalists across the country. But much of the focus of their news coverage from this past year was on the pandemic, said newspaper staff adviser Anthony Hazell.

“There were so many different angles to cover: how students in different time zones were attending remote classes, how hybrid learning was going, how student clubs tried to maintain student life on campus, how health precautions and protocols affected the mental health of students and their families,” said Hazell, a full-time director of communications at Bay Ridge Prep who advises Fordham students with Molly Bedford, a design editor at The New York Times. “They were very personal stories to both the people being interviewed and the students themselves.”

The student news team was “thrown off the digital cliff” during the pandemic, said Grace Getman, FCLC ’22, The Observer’s managing editor. They were forced to adjust to new working conditions and time zones, from Oregon to Louisiana to Russia. But this year was also a period of opportunity, she said.

“It gave us a real chance to examine why we have the rules that we do and why we do the things the way that we do them,” said Getman, who highlighted her team’s reporting on how the Fordham community was impacted by COVID-19 vaccines. “It broke the chain on a lot of things and gave us a huge opportunity to connect and collaborate in ways that we never even thought of before.”

In addition to the American Scholastic Press Association award, two members of The Observer—Arts and Culture Editor Madeline Katz and Assistant Features Editor Aidan Lane—were recognized by School Newspapers Online (SNO), a website platform that collaborates with collegiate news publications across the country, for their stories “Hell’s Kitchen Free Store is Priceless” and “Labor Organizers Shine During May Day Protests.” Their stories were featured in the online Best of SNO showcase that highlights top student work.

“It’s intimidating, but inspiring to know that people are going to be reading what we did, what we said, and what we recorded,” Getman said. “It sounds a bit cheesy, but history has its eyes on us. This time, this moment, is one that people are going to want to know about. Not only do we have an obligation to our readers right now, but we also have an obligation to the future.” 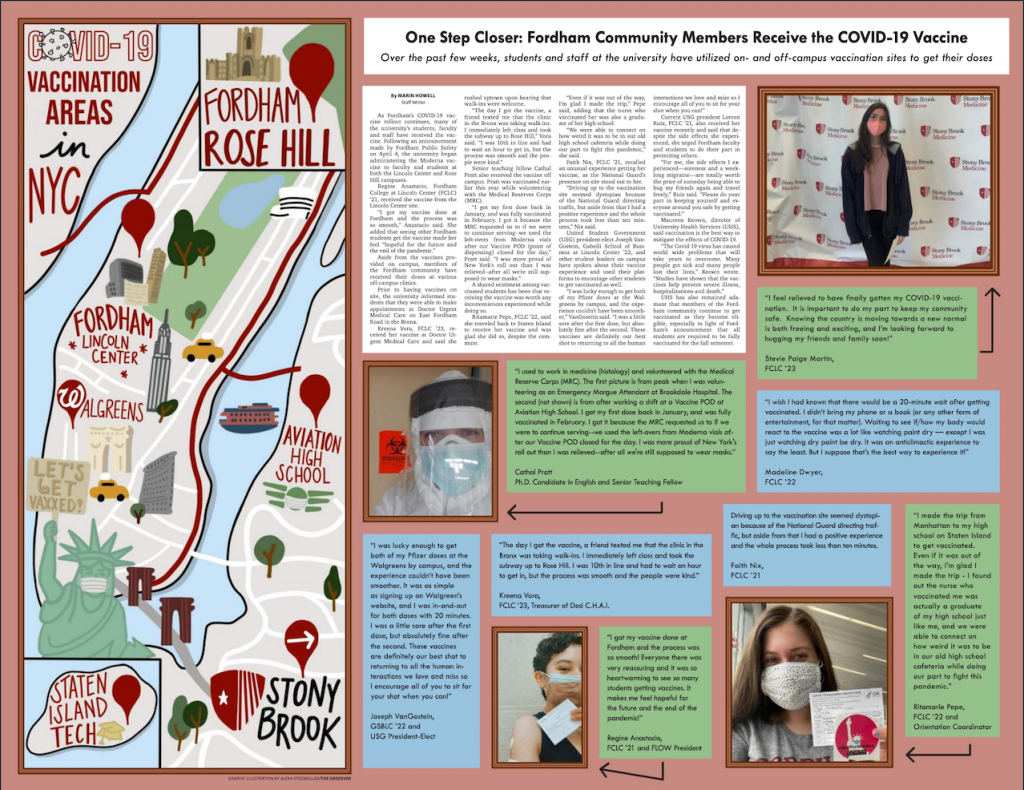 The Observer’s centerfold for Issue 5, the paper’s last issue from this year