skip to main content
Return to Fordham University
You are at:Home»Editor's Picks»Summer Read Highlights Themes of Identity and Racial Justice

Struggling to find your voice, battling racial injustice, and understanding what it means to be part of a community were just a few of the themes explored by incoming students in this year’s joint summer reading program.

First-year students from Fordham College at Rose Hill and Fordham College at Lincoln Center read The Hate U Give by Angie Thomas, who is the 2021 Mary Higgins Clark Chair at Fordham. The novel tells the story of a Black teenage girl trying to navigate the divide between her poor neighborhood and the fancy prep school she attends. When her unarmed friend is killed at the hands of the police, she is thrust into the spotlight.

Jary Jerome Tolentino, an incoming first-year student at Fordham College at Rose Hill, said that the book provided an honest look at the challenges Black people and other people of color face.

“The Hate U Give encapsulated the reality the Black community faces—it didn’t sugarcoat it,” said Tolentino, who plans to study math and computer science. “It showed a lot of racial injustices and even microaggressions, stories of the Black community, and it could even be applied to the people of color for that matter.” 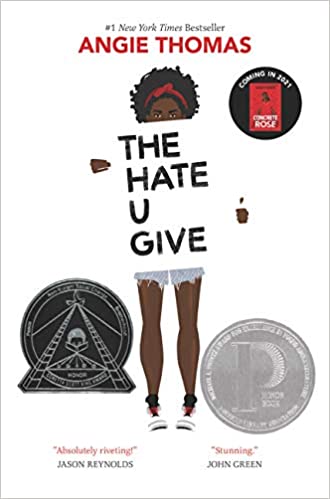 The Hate U Give by Angie Thomas

This is the second year of the joint program, which aims to welcome students to the University and help them get to know students from both campuses, said Garcia and Tracyann Williams, the assistant dean for student support and success at Lincoln Center.

Olivia Reyes, an incoming first-year student at Fordham College at Lincoln Center who is planning to major in journalism, said that she was really captivated by how the main character Starr unintentionally became the center of a movement.

“She was simply trying to drive with her friend when she witnessed the most disturbing thing a human can—the murder of a loved one,” Reyes said, noting that Starr became the focus of news stories and a criminal trial. “She underestimates the power of her own voice … until she is able to grow into her new role and see that people will listen to her if she has the courage to speak out and share her own truth.”

Reyes said that the book, along with the events of 2020, inspired her to find her own voice and speak out against injustice.

“[Starr’s boyfriend] becomes actively anti-racist when he speaks out, when he fights side-by side with Starr and shows action. That’s something I think a lot of white people can relate to, including me—trying to find my place in the greater movement and recognizing my silence is complicity,” Reyes said.

Tolentino said that the character of Hailey Grant stuck with him, as she starts out by being one of Starr’s closest friends, but their relationship dissolves after Hailey commits multiple microaggressions and racist acts against Starr.

“Something that really stuck with me was how we all have a Hailey that manifests in our lives one way or another,” he said. “You don’t have to be explicitly racist to be considered racist, even with the small actions that we do, we have to be really mindful of them, and we have to reflect on how they could impact other people.”

Going Beyond the Book

After reading the book, the students had the opportunity to participate in three Zoom sessions, which explored different aspects of the book.

“Engaging with the text is an intimate experience,” said Williams. “Through literature, the intellectual and interpersonal conversation can begin well before the first day of classes for our students.”

Mark Naison, Ph.D., professor of history and African and African American Studies led the first session, which discussed the role of hip hop and political activism. The second session featured Lisa Gill, Ph.D., senior dean for Fordham College at Rose Hill and Renaldo Alba, Ph.D., associate director of CSTEP/STEP exploring how students connected with the themes in the book.

“The most powerful takeaway was from one student who shared that they had never been a part of a discussion like the one we had, and they were excited about coming to Fordham for that exact reason,” Garcia said. “This sentiment really captures one of the main reasons I love the read—students are excited about college and a liberal arts education can provide that space for creativity.”

Juan Carlos Matos, assistant vice president for student affairs for diversity and inclusion. and Jenifer Campbell, Ed.D., dean of students at Lincoln Center, led the final discussion, where students explored how they related to different characters and themes.

Matos talked about how he struggled for a while with his own identity as a gay Afro-Dominican male.

“I, for a long time, never felt complete—I never felt authentic in either space, so when I was in a group of LGBTQ-identified students, I was one of very few people of color,” he said, adding that the converse was also true: In groups for students of color, he was often one of the few out LGBTQ students.

Tiziana Capizzi, a transfer student attending Lincoln Center in the fall, said she related to Starr and Matos, as a person of mixed heritage—Panamanian and Italian.

“Growing up in Panama, I asked myself, “I’m Latinx enough?” “[Am I] really European at all?” she said. “At the end of the day, just like Starr, I learned that it’s all about remaining open and understanding that both worlds play roles in what makes me unique.”

Elliott Lehman, an incoming first-year student at Fordham College at Lincoln Center, said that the discussion made him excited to attend Fordham and continue having deeper, engaging conversations around important issues like racial justice and grassroots community organizing.

“I truly had no idea what to expect from my first academic introduction to Fordham, and I was really rather blown away by not only the [staff members]but the other students,” he said. “Back in high school, a lot of the discussions were very predictable in the sense that, I think, they all just tended to miss the bigger picture.”

Administrators said that they were impressed the students were so willing to share their personal experiences and stories with the group throughout the three sessions.

“It is so powerful to see students connect with the text, each other, and faculty, administrators, and staff participating in the read,” Garcia said. “We want to encourage students to come up to the Bronx or head down to Lincoln Center and to really embrace the “New York City” is my campus motto.”