Margaret Fisher, a 2017 graduate of the honors program at Fordham College at Lincoln Center, was named to the Undergraduate Awards (UA)’s 2017 Highly Commended list for her paper, “Making Kin Through Specter in Marilynne Robinson’s Housekeeping.”

“This is such an unexpected and exciting honor, especially since this was Fordham’s first year having students submit to the awards,” said Fisher, who is studying at the Universitat Internacional de Catalunya in Barcelona, Spain, and working part-time as an English teaching assistant in Seville.

Fisher, who studied comparative literature and behavioral development, originally wrote her paper as part of a semester-long capstone project in an honors seminar taught by English professor Shoshana Enelow. The course, Person, Place, or Thing, explored human beings’ relationships with the environment. With guidance from Enelow, the winner of the 2015-2016 George Jean Nathan Award for Dramatic Criticism, Fisher said she was able to explore new ways of reading literature, criticism, and the world.

“In every class session, Professor Enelow manages to create the ideal space for creative thought and discussion, fostering an environment of exciting possibilities and potential connections,” she said.

UA, a leading undergraduate awards program celebrating outstanding undergraduate coursework, received 6,472 entries from applicants around the world. The top 10 percent of papers in each of the 25 categories, which includes history, economics, philosophy, and literature, was recognized as “Highly Commended.” Fisher and others at that level have been invited to attend this year’s UA Global Summit, a four-day networking and personal development event in Dublin, Ireland in November. 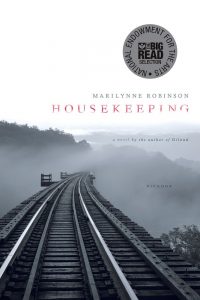 Marilynne Robinson’s classic 1980 novel, Housekeeping, the focus of Fisher’s paper, tells the story of Ruth and Lucille, two orphaned sisters who are raised by a series of relatives in Fingerbone, Idaho. Among their many caretakers is their unconventional aunt, Sylvie.

In her thesis, Fisher drew on writings by French philosopher Jacques Derrida and American scholar Donna Haraway to examine how Sylvie’s “boundary-less existence” challenges and shapes each girl’s personal identity.

“I argue that Sylvie occupies one extreme on a spectrum of transient existence,” said Fisher. “She eschews all conventional human connection for the sake of forming new, surprising connections with nature and the non-human specters that haunt Fingerbone. She stands in direct opposition to Lucille and the rest of the townspeople, who hold fast to their concrete human world and ignore the possibility that the non-human and spectral have a legitimate place in their lives.”

Fisher, a recipient of FCLC Dean’s 2016 Undergraduate Research Grant Awards, said she believes that those who are open to “boundary-less love” often find themselves caught between two worlds. In this instance, while the character Ruth is naturally drawn to her aunt’s eccentricity, she also craves the familial intimacy she finds in her sister Lucille.

“As the novel’s narrator, [Ruth] engages in deeper self-examination than any other character and is able to face her most painful desires and failings,” she said.

Fisher found Haraway’s concept of “making kin,” or connections, particularly influential. She said she circles back to Haraway’s philosophy whenever she encounters a relationship that seems rigidly fixed—whether in literature or in life.

“In this paper and in others, I try to convey that life is much less fixed than we often wish it to be and much of what separates us from other people, non-humans, [and our]environment, we construct for our own comfort,” she said.