skip to main content
Return to Fordham University
You are at:Home»Editor's Picks»Learning the Art of Cabaret in New Fordham Summer Course
Justice! Somerville-Adair, FCLC ’21, sings during a cabaret class performance as musical director David Gaines plays the piano.
So you want to sing cabaret?

Several students got to do just that in the first-ever cabaret class offered at Fordham’s Lincoln Center campus this summer.

“It’s the first official cabaret performance workshop at a university with a textbook, so it’s actually very monumentous,” said instructor David Sabella, who is a master teacher in musical theater, voice coach, and co-author of the book the students used in the course titled So You Want to Sing Cabaret (Rowman & Littlefield 2020). 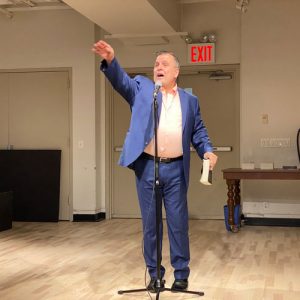 David Sabella, the instructor of So You Want to Sing Cabaret?

Seven students, including one joining remotely from San Francisco, spent five weeks mastering the history, skills, and techniques of cabaret. The theatrical format includes not only singing, but also the art of connecting with the audience, who are usually sitting at tables in a restaurant or nightclub setting. Sabella taught the course with co-instructor Sue Matuski and David Gaines, a New York-based pianist and arranger, who served as a musical director for the course.

“Cabaret performance technique is much different—it’s lyric-based and it’s more of the ‘acting-singer’ than it is like music theater,” Sabella said. “Part of the process for cabaret is the music is completely changeable—the only thing we keep is the lyrics. You want to change the key, you change it. You want to change the arrangement, you change it.”

The only thing that guides cabaret performers is their interpretation of the lyrics, he said.

“In your story of the song, you know, we ask the five W’s—Who you are talking to? What do you want from them? Why don’t they give it to you right away? Where are you and when is it—what time of day?” he said.

For example, Sabella said you would talk differently to your partner laying down before going to sleep than you would a friend in the middle of a packed cafe at 2 p.m.

At the end of the course, the students performed their own two to three song sets, including their own interpretations of songs, mini-monologues, and even some medleys. 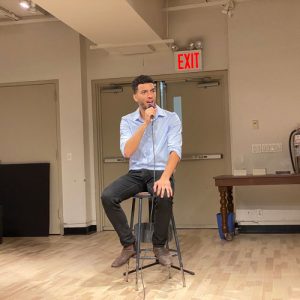 David Wilson, a 2021 Fordham College at Lincoln Center student who graduated in May, but decided to take this course this summer, aims to star on Broadway. And this class performance, held in front of a small group of family, friends, and Fordham community members was the first time he performed live since March 2020.

Wilson, who had taken classes with Sabella for two years, said Sabella convinced him to take this course to give him an unique edge in auditions.

“Something that David repeats to me all the time is how much you can take from cabaret in terms of making the song your own, and simplifying it to the most basic way that you connect with songs, and how that makes you more marketable for Broadway,” he said. “Going into an audition with so many people who look like you, who sing the same things as you—at that point, how can you differentiate yourself? This class is so much about finding your way of making a song interesting.”

For Tori Sen, a rising senior in the Gabelli School of Business at Lincoln Center, a singing course wasn’t exactly what she thought she was signing up for.

“I’ve always been interested in arts, in general, on the side, even though my major is business,” said Sen, a dancer who initially thought the class would be focused on dance. ”And then I decided to stay in it for a challenge—I’ve never sung in front of people, only in private. So it was nerve wracking for me.” 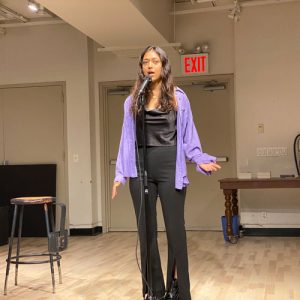 Tori Sen, a rising senior in the Gabelli School of Business, sings cabaret.

But Sen said that the course opened her eyes to new ways of thinking and gave her a few skills she hopes to use both in business and performing.

“It definitely was challenging, but it was really fun,” she said. “There’s a lot of takeaways, like confidence boosters and vocal techniques that I’ve learned.”

Sen said that the hardest part was learning how to overcome the nerves.

“Every time I would open my mouth and my voice would shake—I was so nervous,” she said. “ I think this helped me overcome that and that was a really big deal.”

Matsuki said that after watching the students perform, she felt like a proud mom, particularly in seeing their growth from the start of the course.

“I was there as a proud mom and as an audience member, not the teacher anymore, and I think that’s why I got so emotional, because they were magnificent,” she said. “To watch them process our technique and to watch them really commit to a personal level of communication with their lyric—that’s what moved me.”