skip to main content
Return to Fordham University
You are at:Home»Editor's Picks»Fordham College at Lincoln Center’s Year of Magic Concludes with Hope
Tom Verner delivered a talk weighted in world strife, yet levied with magic. (Photo by Tom Stoelker)
Capping off the Year of Magic at Fordham College at Lincoln Center (FCLC), Tom Verner, Ph.D., the founder of Magicians Without Borders, gave students magic lessons and a talk on the healing powers that magic can bestow in troubled spots around the globe.

Verner’s March 29 visit was the last event tied to a yearlong effort by FCLC deans to enhance student’s first-year student experience through a cohesive theme of magic threaded through programming and academics.

“The actual theme that has emerged is probably one we would have never expected—and that’s a good thing,” said Professor Fred Wertz, Ph.D., acting FCLC dean.

The year began with all first-year students reading Lev Grossman’s The Magicians. The novel, which has inspired an ongoing television series on the SyFy network, didn’t necessarily land well with students due to concerns about diversity and gender portrayals in the book. This prompted Grossman to deliver a pointed lecture titled, “I Did It Wrong,” which not only addressed student criticism, but also examined mistakes he made during his career.

“I didn’t think the students would have criticized The Magicians, and we sure didn’t think [Grossman] would talk about it,” said Wertz. “He said ‘I’ve been doing things wrong all my life, but you learn from your mistakes and that’s life.’”

Wertz said that there were many other magical surprises over the course of the year, including when a hypnotist veered from traditional notions of what hypnotists might make people do, such act silly, but instead suggested to them, under hypnosis, that “they believe in themselves and the core of their being.”

Held just after a series of magic workshops for students, Verner’s talk too, held several surprises. Magic was at the core of the talk, but his examples of magic’s potential were mired in the very real horrors of war and violence. Having been a professor of psychology for more than two decades at Burlington College in Vermont, Verner stumbled onto the unexpected power of magic while visiting refugee camps in Kosovo during the civil war there. 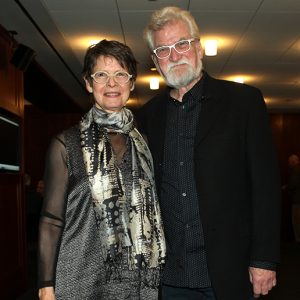 Verner, with his partner in life and magic, artist Janet Fredericks (Photo by Tom Stoelker)

Together with his wife Janet Fredericks, he was guided through the camps by a 6-year-old called Fatima to perform magic for the refugees. They met war-weary men and old women, all of whom knew Fatima. She would get them water, assistance, and a table if need be, which is not an easy thing to find in a refugee camp, said Verner.

When they came to a town “swollen with refugees,” they set up a table and within a few minutes, 350 people stood before them waiting for the show to begin. Magic commenced, and when the show was finished a skeptical old woman approached. She had seen Verner multiply flowers from a single stem. She asked him to do the same with a coin. Which he did. She asked him to do it again and he did. She stood back in belief, not disbelief. She then asked him to produce what she really wanted.

“Make us visas to America,” she said; “I can’t do that trick,” he responded.

On leaving the camps, Verner turned to say goodbye to Fatima, but she wasn’t there. She was hiding in the back of his car. She wanted to go to America with Janet and him. It wasn’t until he returned to his hotel did he realize that throughout the day no one spoke English and he didn’t speak Roma. The day had played out with magic being the common tongue. Soon after, he formed Magicians Without Borders. Many shows followed, in Afghan refugee camps, in Somali camps, and in the poor towns of El Salvador where children walked past decapitated bodies and the results of horrific gang violence. 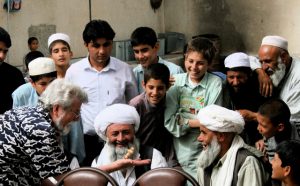 “They all understood magic, that magic was this universal language, and then I realized another thing, no matter who we performed for, when they saw magic they thought, ‘Maybe we can go to America and realize our hopes and dreams,’” he said.

He recalled another refugee fleeing the Eastern European pogroms that had threated the lives of so many European Jews. The refugee moved to Wisconsin as Erik Weisz, a name he later changed to Harry Houdini.

“Houdini once said, ‘When I perform my magic in poor difficult situations, my magic not only amuses but can awaken hope that the impossible is possible,” Verner said, quoting the master.

It’s a realization that Verner decided to build upon by forming his nonprofit of a dozen activist magicians. Magicians Without Borders has since gone on to perform for more than 7 million refugees and orphan children, he said. They hold workshops, like the one held with Fordham students, teaching the children how to do their own magic tricks. In most of the camps, it was the first time that many had seen an entertainer. 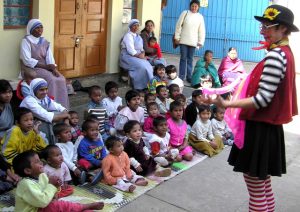 Fredericks, as her alter ego LeFleur, performs for orphans in India.

“A south Sudanese elder told me, ‘We laugh a lot among ourselves in our huts, but for the first time in 15 years we laughed together as a community,’” recalled Verner. “These isolated people come together for wonder.”

Eventually, the stated mission for the growing group became: “Entertain, Educate, and Empower.”

By teaching, as well as performing, they left behind a bit of magic with young people who could, in turn, teach others in the camps. Some have gone on to professional lives financed through their skills.

On Friday night, after the lecture, a few of Verner’s protégés from the Yale Society of Magic mingled with the newly minted magicians who had attended the workshop from the night before. There was talk of collaboration for one of Fordham’s Global Outreach programs.

Global Outreach (GO!) was involved in planning from the start of the year, as was Student Affairs and Mission Integration and Planning. For Verner, a former professor, it was a delight to see the many departments come together to make magic.

“I was in academia for 40 years,” he later wrote in an email to Fordham News “What a joy and inspiring delight to be with a group of University folks who are deeply driven and inspired by a vision and seem to have vocations and not jobs. Everyone involved had intelligent, creative, inspiring, funny, delightful things to say. I feel honored to be associated with the Fordham family.”

For Wertz, the year’s events have the potential to spark a Lincoln Center tradition of incorporating a theme into the first-year experience.

“To have each of these scenarios take place, who knows what’s going to emerge in the years to come!” he said.