skip to main content
Return to Fordham University
You are at:Home»Colleges and Schools»Fordham College at Lincoln Center»Denzel Washington Chair LaTanya Jackson on Rhythm, Playwriting, and Respect
Photos by Tom Stoelker
This fall, actress LaTanya Richardson Jackson assumed her post as Fordham’s Denzel Washington Endowed Chair in Theatre, a role she’s taken on while starring as Calpurnia in the Broadway hit To Kill a Mockingbird. As chair, she leads a weekly workshop for Fordham Theatre students—and assigns readings and papers—all while playing eight shows a week.

And yet, despite her brutal schedule, during a recent Monday afternoon workshop at Fordham College at Lincoln Center, Jackson arguably had as much, if not more, energy than her charges. 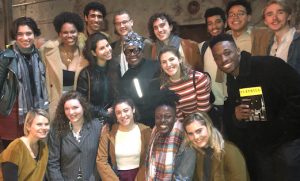 Jackson and actress Celia Keenan-Bolger (lower left), who won the Tony playing the role of Scout Finch, meet with students after a performance of To Kill a Mockingbird.

“When I get into it, the students give me so much joy and so much hope for what we got for the future in theater,” said Jackson, who sits on the board of the American Theatre Wing. “That they’re even interested! I live in California and most of those kids, they’re just trying to get into movies and TV, and I’m like, ‘Does anyone know what it is to love the theater?’”

Jackson told Broadway’s Playbill that her love of theater began after seeing the musical Camelot. She went on to develop extensive Broadway and off-Broadway credits, including roles in the acclaimed off-Broadway production of For Colored Girls Who Have Considered Suicide When the Rainbow is Enuf and the Tony-nominated Joe Turner’s Come and Gone, as well as dozens of film and television productions, including Juanita, U.S. Marshals, Fried Green Tomatoes, and Malcolm X. Her Tony-nominated Broadway run in A Raisin in the Sun placed her opposite Denzel Washington in a production that has since become something of a feeder for the endowed chair he funded at Fordham. The play’s director, Kenny Leon, held the post in 2014 and actor Stephen McKinley Henderson held the chair in 2016.

Jackson said that for her role in To Kill a Mockingbird, a reinterpretation of the classic novel by Harper Lee, writer Aaron Sorkin, producer Scott Rudin, and director Bartlett Sher each played a role in convincing the actress that she wouldn’t be coming to Broadway to play a black maid without agency, as the character is portrayed in the book. The New York Times notes that Calpurnia, as played by Jackson, is the “needling conscience” to Atticus Finch, the play’s lead protagonist, played by Jeff Daniels.

The veteran actress has said in several interviews that to play the role, she has drawn on memories of her grandmother, who worked in service for a family. In her workshops, she tells students to draw on their own experiences, but she also wants them to examine the playwriter’s intent and align themselves to the language and culture they are intended to portray. She said that for today’s students who are awash in the selfie culture of social media, it can prove to be a difficult task.

In a Q&A following a monologue workshop, Jackson discussed teaching today’s acting students, respecting the lines of a playwright, and theater’s role as a conduit for change.

What are some of the biggest challenges facing young actors today?

The generation now seems to be of one mainstream thought that they’re all plugged into: “This is who I am. Find me like this. This is how you got to get it.” They are committed to you coming to them rather than them having to come to you. It’s their thing. I’m here to show you the practical side of working. How to get it together to be a professional.

You require the students to mark up their scripts to denote pauses, inflections, levels, and rhythm. Why?

When you mark your script, you mark the lines in the natural way that you hear it. This is an unnatural thing that we’re being asked to do, which is to act. So, we actors have to try to render the language and give it back in a way that people already know. And the audience hears that. The students are all smart enough in the academics of it, but they have to go back and try to figure out what’s interesting and an interesting way to say it. This is a safe space. We are here to get it, to understand exactly what it is, so there is no good, better, best.

Watching you reminded me of watching a coach on the field: “Take a breath here, take a count there, modulate your voice, modulate your tone.” Tell me about coaching students in that way.

One of the students has a beautiful voice that is very low, way down here. And I said, “First of all, you’re going to give yourself vocal nodes trying to talk down there all the time.” I understand it’s a beautiful voice, but you can’t stay there. You have to give me some levels. I told them all from the beginning, “We’re going to get a big bag, and we’re going to fill our big, large imaginary bag full of tricks and techniques. So that when we need them, we’ll go into them and use them.” And one is the, “one, two, three,” count that I did today. That’s just a natural sort of beat between a phrase transition. Because sometimes you’ll pause and say, “Am I pausing too long?” And that pause actually can be measured: Count one, two, three. For actors who know it personally, their clock is tuned to that already. Later in your career, you’ll meet people while you’re playing and you pick up on the rhythm of what they know. And by and large you can hear it: your rhythm, their rhythm, and you just fall right in line. It’s like playing a symphony. That’s what I’m trying to teach them. That is taught. You can learn how to do that.

You read the script when the students perform and you stop them on the slightest mistake, even if they replace the word “the” with “a.” You told the students, “This is theater, not TV.” What did you mean by that?

It’s exactly that. The playwright’s a wordsmith. And if you’ve done TV, they write like this: “OK, yeah, do this line, do that line, change that.” But playwrights, they sit with a piece, they go over it, they do each line, they go through it. So out of respect for the playwright, you should really deliver the lines the way they wrote them. Don’t add, don’t take away.

With certain writers there’s a highly specific cultural rhythm. How is that accessed?

With August [Wilson] people say he has to be taught to a certain rhythm, because of the cadence of how he wrote. But he didn’t create it. He just wrote what he heard. And he was so good at it that everybody thinks that he created this language. But it’s not just from Pittsburgh [the setting for most of Wilson’s plays]. I’m from Atlanta, Georgia. I know people who talk like that. It was the rhythm of their speech that he was able to access. For actors playing those roles, you need to have something culturally that you can lean on to get that.

The president of Ireland was here at Fordham recently and he said that with so many of our established institutions under fire, the arts have seized the moral center. Do you think that’s true?

I’m not so sure about the moral center, but isn’t that just a conundrum? You see how the tables have turned. It used to be that the moral-less people were in the arts. That’s how it was always viewed. But the arts have always given us a reflection of our better selves, of who we should be and while, like in the Janus picture, showing us who we are. It’s our job in enduring the most tumultuous of times: to create. That’s when you rally against what the ills are and try to provide at least a platform for conversation.

Well, I think our time is up.

Really truly. Sam is in town (actor Samuel L. Jackson, her husband), and he said, “Will you be home and have dinner?” I said I would.