skip to main content
Return to Fordham University
You are at:Home»Campus Locations»Rose Hill»Legislators Speak to the Power of Bronx Women
Photos by Jill LeVine. First photo, left to right: Sunny Hostin, Marricka Scott-McFadden, Nathalia Fernandez, Ruben Diaz Jr., Alessandra Biaggi, and Karines Reyes.
Three New York legislators and an Emmy Award-winning journalist spoke about the past, present, and future of women in the Bronx at a Women’s History Month panel discussion at Fordham on March 21.

“We’re gathered to celebrate the women who made the county what it is—they who lived with faith and worked with hope and made love a reality here in the borough, [even]when they did not believe in the borough,” Joseph M. McShane, S.J., president of Fordham, said to a crowd of more than 100 in Keating Hall. “They took to heart the motto of the Bronx: Ne cede malis. Never give in to evil.”

What they all have in common are their ties to the Bronx. Hostin was born and bred in the South Bronx. Biaggi, whose senatorial district includes portions of the Bronx, is the granddaughter of Italian immigrants who lived in Hunts Point. Fernandez’s father and mother immigrated to the Bronx from their native Cuba and Columbia, respectively. And although Reyes and Scott-McFadden aren’t Bronx natives, they have made the borough their home.

“I am originally from Georgia. I wasn’t lucky enough to be born in the Bronx,” Scott-McFadden said to laughter from the audience.

A Woman’s Perspective in Politics

The panel spoke about the need for women legislators who can vouch for the importance of women’s reproductive health, universal childcare, and reducing maternal mortality in New York state.

“When I hear men stand up and matter-of-factly talk about a woman’s body and how things happen in operating rooms that don’t really happen—because I’ve been in operating rooms; it’s my profession—and hear all these people that don’t have a medical background sway how legislation affects us … it’s scary,” said Reyes, who’s worked as a registered nurse in Montefiore Medical Center’s oncology ward. “It’s important to have more women at the table. But [also]more professionals with different backgrounds.” 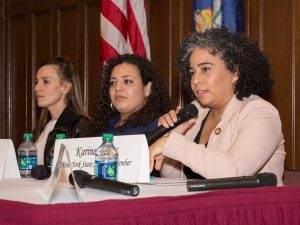 “What we would like to see—and this is why our voices are so important and why it’s so important that we’re in the room—is childcare everywhere,” Biaggi said. “When you have children, they don’t disappear just because you’ve gone to work.” A few women in the audience expressed their agreement.

“It happened to Serena Williams,” Hostin chimed in. “She almost died because they [the doctors]weren’t listening to her.”

“And it’s Serena Williams. Like … what? How can this be?” Biaggi said, searching the eyes of the audience. “We have a real problem with women’s voices [not]being heard.”

A Personal Fight for Equal Pay

The five women also discussed the gender pay gap in the U.S. On average, female workers earned around 80 cents for every dollar a man made in 2018.

Hostin recalled the day she was signed onto The View. When she received her deal sheet from her male agent, she was ecstatic. “When I say I’m a kid from the South Bronx projects … I had never seen money like that,” she said. “I was dancing around.” 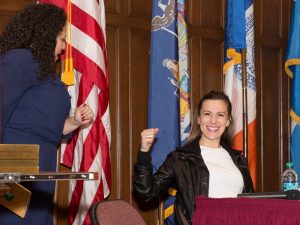 Then her cell phone buzzed. It was Sherri Shepherd, a previous co-host on The View. Shepherd revealed to Hostin her personal pay history from a decade ago. It turned out, said Hostin, that Shepherd was offered more money than her successor.

“[It’s only because] she opened up and shared with me her deal history and her salary that I now have the deal that I have,” said Hostin, who renegotiated her deal sheet with her agent. “And I shared that deal with everybody that came after me.”

It was a lesson Fernandez could relate to. She remembered working in a team where she was the only woman. Two months into the job, she discovered she was making less than all her male colleagues. She was told she was paid less because she was a new employee. But eventually, she said, she received a pay raise to match the men’s salaries.

Speak up when you see discrepancies, Fernandez said—be brave enough to demand your worth.

Leaving a Legacy in the Bronx

At the end of the night, Bronx Borough President Ruben Diaz Jr. presented each panelist with a citation of merit and thanked them for their service to the Bronx community. He asked the audience to give a round of applause for the women who work with him every day. And, in a candid speech, he spoke about the women who have shaped him into who he is today.

Diaz Jr. grew up in a maternal community of abuelitas and mothers in the Bronx, whom he called “the force of the household.” Eventually, he met a woman who became his wife, Hilda Gerena Diaz—the person who became the family breadwinner while he ran for office.

“Even though I lost that first race, she’s the one who paid the bills in our house,” he said to thunderous applause and whistles from the crowd.

He added that the Bronx—home to more women than men—is also the birthplace of women like Jennifer Lopez, Grammy Award-winning rapper Cardi B, and U.S. Supreme Court Justice Sonia Sotomayor.