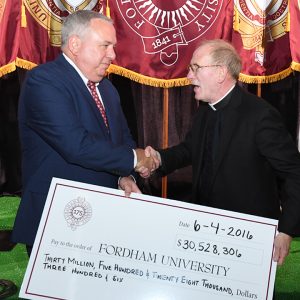 John Reddy ’76, presents a check for more than $30 million to Father McShane.

Everyone at Jubilee has a story.

At this year’s Rose Hill campus alumni reunion, there were the stories of the Marymount girls having to be back to their dorms before 11 p.m. or face the wrath of the nuns. There was the Brooklyn commuter student who took classes during the day, napped in Duane Library, and then went to work at Macy’s at night. There was the young man who grew up Catholic, but found his faith at Rose Hill.

At Jubilee 2016, held June 3 – 5, some 2,000 alumni, friends, and family exchanged stories, made toasts, and reminisced well into the night. In addition to sharing memories, alumni also shared their generosity, raising more than $30 million to support Fordham’s mission.

The Class of 1991 got things rolling on Friday, June 3, by celebrating their Silver Jubilee under the tent with the Morris Brother’s Band. “Sal” from Pugsley’s Pizza played the sax.
(Watch the video)

On Saturday, June 4, Joseph M. McShane, SJ, president of Fordham, welcomed alumni back at Duane Library in Tognino Hall. He reminded the crowd that Archbishop John Hughes, a champion of immigrants and the poor, started Fordham with a similar ethos as it celebrates today. 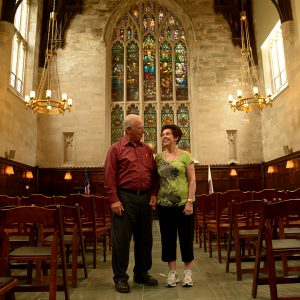 Tony and Pat Santoro at Duane Library, where Tony studied for class and napped before work.

“Today, 90 percent of our students receive financial aid. Why? Because we still have the spirit of John Hughes,” he said. “We are exactly the same, and that’s what makes us very different.”

For the Golden Rams in the room, Tognino Hall seemed a very different place. Once their library, it is where they said they spent countless hours reading and studying. Tony Santoro, FCRH ’66, recalled his time as a “day hopper,” which is what they called student commuters back then. He said his commute took roughly five hours a day, five days a week.

“The library was my home away from home,” he said. “I would do my homework and do my prep. Then I’d find two very big books and that became my pillow . . . I [would]rest my head before heading to work at Macy’s.”

Golden Rams Pat Cooney, PhD, FCRH ’66, and Dennis Marks, PhD, FCRH ’66, said they lived on campus for eight years, as they both attended to Fordham Prep as well. Cooney said that Father McShane’s talk resonated with him because scholarships got him through school.

Joe Messina, Michael Carney, and Christina Trifero from the Class of 2006.

Marks said that, as the son of an alumnus and employee (his father Louis S. Marks, PhD, GSAS ‘51 ’54, received his masters and doctorate at Fordham and later taught here), he received a faculty scholarship to attend Fordham.

“I had this striking revelation that Jesus Christ was truly God and it’s a wonderful universe, because it was ruled by God and he loved us,” he said. “Father Rushmore gave us insight instead of just the faith we were brought up with.”

And life lessons that alumni got from Fordham continued through the 21st century.

“Coming through the fence was emotional. It was a deeper sense of college, you weren’t just focused on what am I going to do after school,” said Christina Trifero, FCRH ’06, GSAS ‘08. “We may not have appreciated that as much when we were here, but coming back you see it through a new lens.” 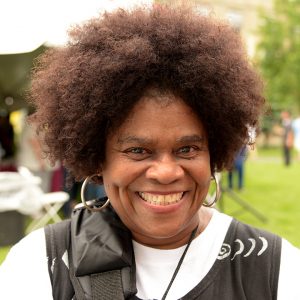 Jean Simmons traveled from the Bahamas to celebrate her Silver Jubilee.

For Jean Simmons, PCS ’91, a continuing affection for the University comes from its Jesuit foundation. Simmons grew up on the small island of Harbour in the Bahamas where she received a scholarship to attend a Jesuit high school in the capital, Nassau.

“They really took care of me, and everything that I am is because of them,” said Simmons, who was a night student and wife and mother while she attended Fordham.

Simmons said she came to Jubilee five years ago, but it wasn’t until this year—returning for her Silver Jubilee— that she even saw Martyrs’ Lawn. She spent her Saturday morning walking around campus, marveling that “it was 85 acres but I never saw any of this.”

“I never really thought Jubilee was for me because I was a night student, but after I came five years ago it really hit home,” said Simmons, who flew in from the Bahamas to attend this year. “Now I have a connection.”

An emotional Gabe Vitalone, FCRH ’44, with his wife Evelyn, after receiving a standing ovation recognizing his 94 years, making him the eldest alumnus at Jubilee. The two are still avid runners. (Photo by Bruce Gilbert)