skip to main content
Return to Fordham University
You are at:Home»Campus Locations»Rose Hill»In Their Own Voices: What It Means to Be A Woman
Left to right: Carol Gibney, Victoria McDonald, Maria Aponte, and Christie-Belle Garcia. Photos by Taylor Ha
When Victoria McDonald was 9 years old, she watched her cousin give birth for the first time. Later, she witnessed another woman breastfeeding a baby. Then it dawned on her:

“We give birth to the world and we feed the world,” McDonald said. “What can’t we do?”

McDonald’s anecdote was among the many shared at the second annual Women at Fordham Luncheon on March 13, which hosted a panel of four Fordham faculty, staff, and administrators who spoke about their lived experiences as women. The event, held in honor of Women’s History Month, was a collaboration between Fordham’s Office of Multicultural Affairs, the chief diversity officer, career services, the Women’s Herstory Month committee, and the Fordham Advocates Cultural Enrichment Series committee.

The two-hour program began with a short video starring Fordham students who spoke on-camera about the women who inspire them the most, from a mother who battled cancer to Congresswoman Alexandria Ocasio-Cortez. The video segued into a live conversation among the four panelists—McDonald, assistant professor of military science in Fordham’s Army Reserve Officers’ Training Corps program; Christie-Belle Garcia, assistant dean for student support and success; Maria Aponte, assistant director of diversity and global inclusion; and Carol Gibney, associate director of campus ministry for spiritual and pastoral ministries and Rose Hill director of spiritual life and leadership—about whom they admire most.

For the four women, it was a unanimous answer—their mothers.

Odes to Their Mothers

The women who raised the panelists came from varied backgrounds and experiences: a foster parent who cared for 21 children, an orphan who became the first in her family to attend college, a woman without a high school diploma who helped found the Northwest Bronx Community and Clergy Coalition, and a Puerto Rican factory worker who gave her daughter a valuable lesson before she died. 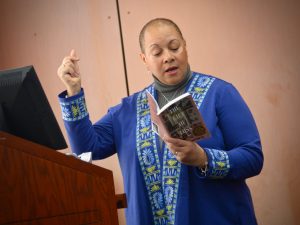 Maria Aponte reads a poem from her second book, “The Gift of Loss.”

“I only had my mom in my life until I was 16 years old,” Aponte said. “I didn’t get dolls when I was a little girl—I got books. She always used to sign them for me: ‘To my daughter, Maria. From your mother, Rosa Maria.’”

“When she knew she was going to die, she wanted to plant as much as she could in my brain as a kid,” Aponte recalled. “She’s the reason why I have an education today.”

Garcia said her mother taught her that homemaking and childrearing are not the sole responsibilities of women—and told her to find a partner who knew that, too. The elder Garcia divided the household chores equally among her children. Her daughters and her son had to sweep the floor, set the table, and wash the dishes.

“So much of the culture has been that we just give, give, give until our cup is empty. How do we create a new conversation … a new narrative around that?” Garcia asked.

Reflecting on Their Lived Experiences: Life in the ’60s, Loneliness, and Discrimination

Gibney grew up in the Bronx in the 1960s—back when the Berlin Wall was being built, when black men and women were fighting for equal rights, when women were still struggling to forge identities of their own.

“Growing up as a woman, I was still holding on to that illusion that television tried to portray: a stay-at-home [mom],” Gibney said.

She watched those walls break down in real time. In her thirties, she went back to school for formal education. But although women have made significant strides since then, Gibney said, there are still disparities in pay and power—something McDonald could relate to.

McDonald, a captain in the U.S. Army who has served in three continents, recalled the day a male colleague insulted her in front of their unit. They were at a staff meeting in Germany, where McDonald had a specific seat. When she reached her chair, a sergeant major told her not to sit there. Instead, he asked her to get another man.

“What do you mean, go get this man, when I’m in charge here?” McDonald recalled thinking. She also remembered her rage.

A Circle of Women

The four Fordham women also spoke about the power of female friendship. Six months ago, Gibney’s daughter died. In the days following her death, the women in Gibney’s life—the “real housewives of Yonkers,” she called them—stayed by her side.

The day of the luncheon, Gibney said, was actually her daughter’s birthday.

“[This morning], I went to—ironically and serendipitously—the woman who brought her into the world, my GYN,” Gibney said. “We held hands, and we cried and laughed.”

“This woman doesn’t only deliver babies. She delivers a lot more that.” 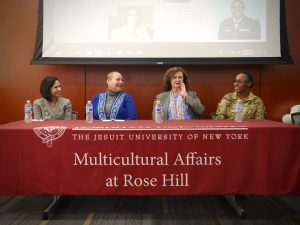 It was a sentiment that Aponte understood. For a few minutes, she relived the 20 years she had worked on the clerical side of the corporate world.

“I was always the token, light-skinned, black Latina woman that made the office look pretty,” Aponte said. “I was good enough to unpack the xerox machine boxes, put the supplies in the closet, answer the phone, and be dismissed.” An executive she once worked for thought the same thing.

“He had the nerve to say, ‘Wow, you’re black and you’re intelligent and you’re so smart for a woman,’” Aponte said. But she swallowed her anger. She had bills to pay.

What kept her sane were her friends who also worked as secretaries. They’d unwind over drinks at Houlihan’s and trade stories about their work woes, Aponte said.

Today, many of those women are college-educated, married, and have grandchildren of their own. Some of them have passed on. But a few of them have remained her closest friends for over 30 years.

“That’s the power of what Carol was saying,” said Aponte, who is now an award-winning author, community arts activist, and founder of a non-profit organization. “Having a circle of women that reinforce for you what you need.”

But at the end of the day, said Gibney, each and every woman is extraordinary.

“We have much more power than we give ourselves credit for,” Gibney said. “Every one of us is powerful beyond our wildest imaginations.”