skip to main content
Return to Fordham University
You are at:Home»Campus Locations»Harlem Hellfighters on Display for Black History Month

One of the University archives’ rarely seen acquisitions is showcased in the Walsh Library atrium this month to celebrate black history.

On display are 34 photos of members of the “Harlem Hellfighters,” the first all-black regiment to serve with the American Expeditionary Forces overseas.

The 369th Infantry Regiment, as it was formally named, fought in both world wars and  broke ground for African Americans seeking to serve in the U.S. military. The display features photos of the members taken between 1939 and 1945. 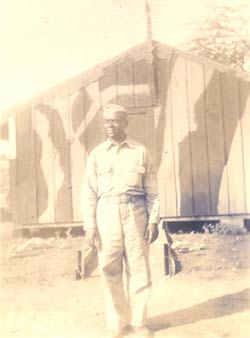 During World War I, the regiment was attached to a French army unit because many American soldiers refused to serve with African Americans. By World War II, however, the regiment had been brought under the umbrella of U.S. forces.

Following the attack on Pearl Harbor, the unit was sent to guard the Pacific coast and then sent on to Hawaii to help defend against further air attacks.

In Hawaii, many of the servicemen felt more welcomed than in the United States because the native Hawaiian population was itself racially diverse. Outside of their own country, they could see themselves as combat soldiers first, according to an article in The Journal of Social History.

They still faced the residual racist ideas from the mainland, however, the article said. One story circulating on Oahu had the Hawaiian natives trying to be kind to the servicemen by putting pillows on their chairs at a gathering. The natives had been told that black men had tails and figured that sitting on hard chairs would be uncomfortable for them.

By 1944 the first Hawaiian NAACP was established in Honolulu. Following the war, many black servicemen decided to remain on the island.

The somewhat obscure collection came to the attention of Patrice Kane, head of archives and special collections for Fordham Libraries, through a vendor. Kane was able to purchase the collection with the help of Fordham’s Bronx African American History Project (BAAHP).

While the photos capture a critical piece of American history, the soldiers in the photos still remain unidentified; Kane hopes that getting the word out about the collection will change that.

“Somebody’s dad is in these pictures. I would love for their descendants to come forward and identify them,” she said. “They are significant to our history project because they represent a slice of New York City’s African-American history of which very little has been written.”