Zaccardi is the champion of ABC’s fourth season of The Great American Baking Show: Holiday Edition, an American cooking competition television series based on the hit U.K. show “The Great British Bake Off.” It features amateur bakers from across the country who compete in holiday-themed cooking challenges.

The show application process wasn’t easy. It included a 75-question application form, a video submission, a Skype interview with producers, a tasting interview, and, for those who made it to the very end, a live baking interview in Los Angeles. Ten contestants made it to the show, including Zaccardi—a self-taught baker and part-time support employee in the strategic sourcing department of Fordham’s procurement office.

She began baking as a little girl. One of the first treats she baked was biscotti anginetti, a traditional Italian soft butter cookie covered with confectioners’ icing and nonpareils. In Zaccardi’s home, they’re known as “Nana’s Sprinkle Cookies”—a family recipe passed down from her grandmother.

Over the past five years, Zaccardi took her cooking skills to nationwide television. In 2013, she was one of three finalists on the Today show’s Joyful Cook-off special, which featured her Thai-inspired chicken and couscous. Later that year, she appeared on ABC’s talk show The Chew, where she baked her homemade peach blueberry pie with pecan crust alongside top chefs Carla Hall and Mario Batali. In early 2016, she won the Rachael Ray show’s 10th annual Burger Bash contest with her roasted garlic and gorgonzola-stuffed burger with arugula, bacon, and frizzled onions.

For The Great American Baking Show, Zaccardi spent 25 days filming in England. She concocted 18 sweet treats, including cannolis stuffed with ricotta cheese, powdered sugar, chocolate, and candied orange peel. But one of the most memorable desserts was her rugelach, she said—not because of the cookie’s taste, but because of the reaction from one of the star judges, Paul Hollywood.

“He shook my hand and said, ‘That’s what I’m talking about,’” she said, laughing as she recalled the moment. “Anyone that has watched the British version [of the show]knows that’s the gold standard.”

But not everything went so smoothly. In the first episode of season four, Zaccardi created a coffee cake that she had made multiple times before. But when she pulled it out of the pan during the competition, the cake cracked. In a different round, she accidentally used the wrong ingredient for a pumpkin spice cake recipe—cream of tartar, instead of baking powder.

“I was heartbroken,” she said. “But I picked myself up and persevered. I said to myself, ‘I’m a better baker than this.’”

Outside of competitions, she bakes goodies for family, friends, and her Fordham co-workers. Two summers ago, Zaccardi started her part-time job at Rose Hill. She’s brought sweet treats to the office for holiday potlucks and her colleagues’ birthdays, including croissants, pina colada cupcakes, and a white chocolate mousse swiss roll. 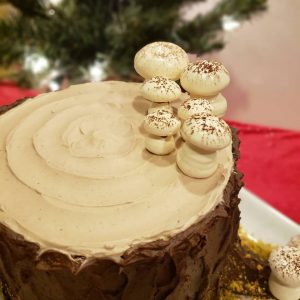 “She really has me hooked to the point where I am rooting for her to have a cookbook,” said Janeira Farrano-Martinez, one of Zaccardi’s colleagues.

Zaccardi’s co-workers describe her as a generous baker who shares her recipes with everyone in the office and a part-time baking teacher who doles out advice when requested. And, another colleague joked, Zaccardi is part of the reason why they’ve gained extra weight.

“This is the reason our rear ends are bigger,” said Angela Epstein, assistant director of strategic sourcing, with a chuckle.

After the competition ended, Zaccardi returned home with a new title, new friends, and a Waterford crystal plate inscribed with the words “The Great American Baking Show: Holiday Edition.” No prize money was included. But the reason she loves to bake, Zaccardi said, isn’t for fame or money. It’s that her food makes people smile.

For now, she wants her baked goods to reach a wider audience, whether it’s through recipes on her website or selling them at small pop-ups around town. She’s leaning toward writing a cookbook, and she’s considering teaching others how to bake.

She also learned something valuable at the end of her baking experience abroad. Zaccardi had unsuccessfully applied to seasons two and three of The Great American Baking Show: Holiday Edition. She didn’t make it onto the Christmas Cookie Challenge on Food Network, either. But she made it to the fourth season of the show that rejected her twice—and she won.

“If you keep believing, you keep working hard, you can do anything,” she told the camera at the end of the season finale, shortly after she learned she took first place. “Even at [age]56, you can do it.”