skip to main content
Return to Fordham University
You are at:Home»Campus Locations»Rose Hill»At Work With Virginia Santiago Martinez, Supervisor at the Marketplace
Photo by Taylor Ha
Who She Is

Aramark-employed supervisor at the Marketplace, a residential dining location at the Rose Hill campus

She manages more than 80 employees, from cooks to cashiers to dishwashers. You can find her everywhere—the kitchen, the scullery, the cash register—checking that day-to-day operations are running smoothly.

From Puerto Rico to the Bronx

Martinez’s own story begins in Puerto Rico, where she was born in 1958. When she turned 22, she moved to New York and enrolled in nursing school. But after two years of watching nurses clean wounds and puncture strangers’ skin with needles, she realized it wasn’t for her.

“You have to have [the]stomach and passion to do that,” she said.

She soon started a nearly 25-year career with Sodexo, a food services and facilities management company, where she worked as a bookkeeper and, later, as a supervisor. Her job with Sodexo took her to Hunter College and, in 2013, Fordham. When Fordham changed its food service provider to Aramark in 2016, she stayed on.

Her home—where she lives with her husband, Rafael, and her granddaughter, a second-grader who asks her grandparents for help with math homework—is only an eight-minute car ride from Fordham’s campus. Martinez said she loves cooking meals for her family, especially lasagna, cannolis, and chicken cordon bleu. 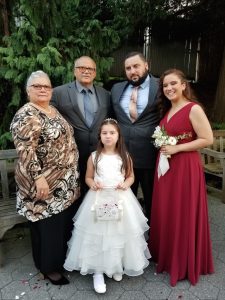 Martinez with her husband, son, daughter, and granddaughter at a 2018 wedding. Photo courtesy of Virginia Santiago Martinez

“Let me show you my family,” she said, pulling out her phone. “This is my son. This is my daughter. She’s gonna get married next year. This is my grandchild, my husband, and me. That was [taken at]my niece’s wedding last October,” she said, proudly pointing out each person on her phone screen.

Martinez met her husband Rafael in New York when she was 23. This September, the couple will celebrate 39 years of marriage.

“He played baseball with my big brother,” she said. “Sometimes when I walked to school, he saw me in the street and gave me a ride in his car. We started talking and talking—and look,” she said, throwing her hands up with a smile.

Growing up, Martinez was called Viggie. But at Fordham, students call her Mami.

Over the past six years, Martinez and her staff have fed thousands of students. She remembers many of them, like the Costa Rican students who were excited to meet Martinez—another person who could speak their native language. “They see me and they come in happy, asking ‘What are you cooking today? What is that?’” she said. “And I explained in Spanish.”

And the students remember her as well.

Melanie, a student from Oregon, gave Martinez a handwritten thank-you card adorned with penciled flowers for all the times she saved food for her. “We close sometimes at 8 o’clock and when it’s summertime, people come in late because they’re doing internships or something,” Martinez explained. “And I save food on the side [for them].”

Then there was that Saturday in the spring of 2016—the day of Fordham’s annual commencement. Three seniors wearing graduation gowns tracked down Martinez in the crowd. One student introduced her to his mother, who had flown in from Japan. Clasped between his hands was a surprise for Martinez—a big bouquet of flowers.