skip to main content
Return to Fordham University
You are at:Home»Campus Locations»Rose Hill»A Decade Later, A Mentor Returns to Fordham
Photos by Marisol Diaz-Gordon
After years of supervising cultural centers and supporting underrepresented students, Daisy Torres-Baez, previously a mentor with Fordham’s Mentoring Latinas club, returned to the Rose Hill campus to give advice to a new generation of students.

“The benefits of having a mentor [are so valuable]… asking questions, not feeling shy about asking questions,” Torres-Baez said to more than 20 local middle school, high school, and college-age students on Jan 30. “Even at this age in my life, I struggle sometimes with asking those questions to figure out what I need to do next.” 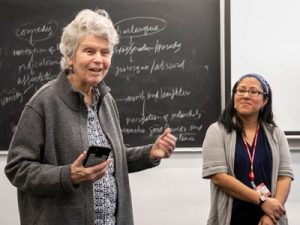 Today, Torres-Baez is a diversity programs coordinator in Weill Cornell Medicine’s division of general internal medicine. But in the early 2000s, Torres-Baez was a program administrator with Mentoring Latinas/Club Amigas—a 16-year-old program that cultivates close relationships between teenage and college Latinas in the Bronx. It brings adolescent Latinas, who are typically the daughters of immigrant parents, onto the Rose Hill campus for tutoring and down-to-earth dialogue with Fordham Latina students every week. Over the past decade, the program has received $500,000 in grants from AT&T.

At the Wednesday afternoon event, Torres-Baez showed the club’s newest members the power of Latina women with a familiar story—her own.

The daughter of Peruvian immigrants, Torres-Baez graduated from Cornell University with a bachelor’s degree in sociology and a concentration in Latino studies. During her college years, she and her classmates supported undocumented students who lacked access to higher education in the U.S. and conducted workshops to explain their cause. Now she is applying to Ph.D. programs, with the goal of researching educational equity and inclusion of undocumented students in medical school, she said.

At Weill Cornell, Torres-Baez is working on a grant to increase underrepresented students at the medical college. Recently, she said, she also helped initiate a mentoring program for minority medical students, faculty, and residents.

“Last night, there was a room of 77 doctors of color: black, Latinx, Asian,” Torres-Baez recalled to the room of young women—including one who said she wanted to become a doctor. “And you don’t see that often.” 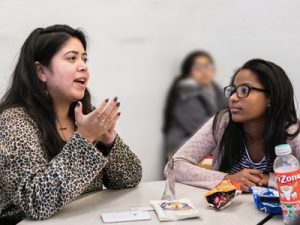 A Club Amigas mentor and mentee

The most moving part of Wednesday’s mentoring session was when the young mentees and mentors revealed their dream careers in a round-robin fashion, said Sandra Turner, Ph.D., director of the Mentoring Latinas program and associate professor in the Graduate School of Social Service. The jobs were as eclectic as they were ambitious: a professional soccer player, a neonatal nurse, a marine biologist.

In spite of a sudden snow squall that afternoon, the event at Dealy Hall had served its purpose: to unite Latina women from different generations. As the event reached its end, Torres-Baez recalled the year she left Mentoring Latinas—and in particular, the girls in the program from many years ago.

“I think most of those students … just graduated from college, or they’re in their senior year of college. That will be all of you in a couple of years,” Torres-Baez said, looking at the young Latinas in the room. “I hope we all keep in touch.”