skip to main content
Return to Fordham University
You are at:Home»Colleges and Schools»Fordham College at Lincoln Center»A Cupcake Celebration for Fordham’s Dodransbicentennial

The first day of classes at the Rose Hill campus kicked off on Aug. 31 with an introduction to and celebration of Fordham’s Dodransbicentennial, i.e. 175th Anniversary.

Students at the Fordham College at Rose Hill (FCRH) were greeted at the annual club fair on Edwards Parade with 2,000 maroon and white cupcakes and party hats; the following day at Fordham College at Lincoln Center (FCLC), students consumed an additional 800 cupcakes on display in the Lowenstein atrium.

Students on both campuses had already mastered the pronunciation of “dodransbicentennial,” with the a cappella group F#s incorporating the term to the tune of Happy Birthday,

Nevertheless, dissecting its Latin translation was being hotly debated.

“Dodrans was a Roman coin back in the day, worth like three quarters of a dollar essentially, so you have the full hundred in the ‘centennial’,” said FCLC senior Sara Garcia. Her friend Erika Ortiz, an FCLC junior, interrupted.

“But with the bicentennial, that makes it 275 though? I’m just really confused,” said Ortiz.

“Basically, we can’t do Roman math,” said Garcia with a laugh. 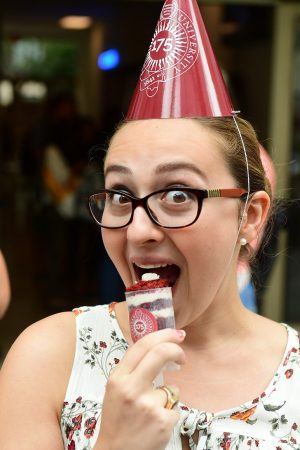 “It makes you feel part of something big,” added FCRH freshman Peyton Hayes of the anniversary.

For Peter Tricarico, a Rose Hill senior and member of the pep band, being a member of the band means being part of a community of music lovers that stretch back more than a century.

“For the pep band we copy all this 70s [sheet]music we have, it’s great music and everybody loves that stuff,” he said. “The other thing is that with age comes wisdom and I think the same holds true here [with the dodransbicentennial].”

FCRH senior Anna Palmer, a member of the University’s cheerleaders, said being part of the group has introduced her to many traditions unique to Fordham.

“No one else has a victory bell,” she said of the 1946 clapper that is rung after a each football win.

Merve Karakaya, a FCRH sophomore and member of the Muslim Student Association, said the anniversary is a celebration of change, as well as tradition.

“The school is diversifying with a lot different of religious backgrounds, which is amazing,” she said.

At the Lincoln Center campus, FCLC sophomore Isabel Wallace-Green made reference to one of the dodransbicentennial’s tenets—Fordham’s 175 years of service in New York City. She said that student volunteers at the Dorothy Day Center understand the University is rooted in the neighborhood.

“We talk a lot about the history here and our role as members of this community,” she said. It’s definitely great to be at a place with so much history and so many cultures. I think we’re lucky.”