skip to main content
Return to Fordham University
You are at:Home»Campus Locations»Lincoln Center»‘U.N. Matters’ Conference Highlights Issues Faced by Women and Children
Houry Geudelekian, who chairs the Non-Governmental Organization Committee on the Status of Women (NGO-CSW/NY), spoke of her organization’s efforts in working with the “Generation Equality Movement.” Photos by Matthew Roach.
Thirty years ago, the United Nations held the “Convention of the Rights of the Child.” The event produced an international agreement on the rights and protection of children, which has become regarded as “the most widely ratified human rights treaty in history” and helped inspire governments to implement laws and policies to protect children and invest in their care, according to UNICEF.

A look at that convention as well as three other U.N.-related anniversaries—the first for the Global Compacts on Migration and Refugees, the 20th for the passage of the Security Council Resolution 1325, which addressed the specific impacts of armed conflict on women and girls and the 23rd of the Fourth World Conference on Women: Action for Equality, Development and Peace held in Beijing, were the major themes at a conference titled  “Why the U.N. Matters,” held at Fordham Law School on Nov. 25.

The conference was organized by the Fordham Institute for Women and Girls, the Fordham Graduate School of Social Service, and the International Health Awareness Network (IHAN). GSS and IHAN also sponsored a student essay contest, and the top two student papers were presented at the event.

Yung Hsien Ng Tam, MSW ’21, a foundation year student in the program, who has been placed at OHEL Children’s Home and Family Services, presented her paper titled, “The 1995 Beijing Conference on Women: Progress and Challenges for Women”.

Sydney Boyer MSW ’20, an advanced student in the program, who is placed at the Unitarian Universalist United Nations Office, presented her essay on “The Forgotten In Global Policy.”

The conference also featured presentations from Sandra Turner, Ph.D., director of the Women and Girls Institute at GSS, Marciana Popescu, Ph.D., professor in the Fordham Graduate School of Social Service, on the global compact for safe, regular, and orderly migration, Jourdan Williams, the director of global policy and advocacy for the International Health Awareness Network on the U.N.’s security resolution on women, peace, and security; and Dr. Sorosh Roshan, founding president of IHAN, who discussed what it was like to be at the Women’s Action conference in Beijing.

The event examined the initiatives, treaties, and resolutions that came out of those U.N. events and detailed the issues that still exist and the work that still needs to be done.

A look at challenges for migrants, refugees 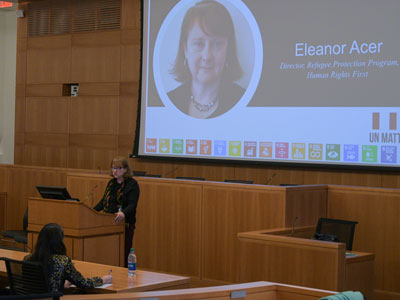 In light of the one-year anniversary of the Global Compacts on Migration and Refugees, Eleanor Acer, LAW ’88, director of the Refugee Protection Program, Human Rights First, shared her experiences seeing “the impact of the failure to uphold human rights protections, particularly with respect to women and girls, as well as others, who are seeking U.S. refugee protection at our borders as we speak today.”

Acer said that she and her colleagues “spent an awful lot of time over the past year visiting women, children, and other asylum seekers at our borders … as well as in immigration detention facilities around the country.”

“At the border, the Trump administration has worked to ban and block refugees from seeking protection at the U.S., turning them back to Mexico through a number of different policies, and now some of you may have heard of some reports of people being sent back to Guatemala or to Honduras and El Salvador,” she said.

Acer, who received the Louis J. Lefkowitz Award for Public Service from Fordham Law in 2007, said that this made those seeking refuge susceptible to attacks

“Many of the areas that the Trump administration is turning people back to are essentially ruled by cartels,” she said. “Refugees and migrants and women and children in particular are very vulnerable to being targeted. There have been reports of kidnappings, attacks, sexual assaults of asylum seekers and migrants all across the border.”

Acer said that her organization has been working since 1978 to “push the U.S. government to be a strong voice for human rights around the world and here at home to live up to our own human rights obligations.”

“Needless to say, these days our challenges are greater than ever,” she said.

Human rights at the local level 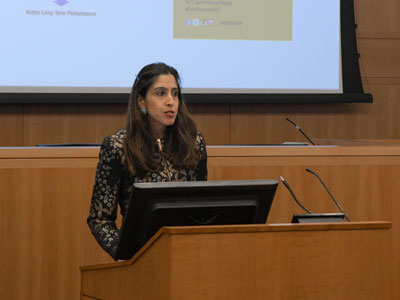 Geeta Tewari, the associate director of the Urban Law Center at Fordham Law School, discusses the role cities have in improving human rights.

Geeta Tewari, the associate director of the Urban Law Center at Fordham Law School, said that cities, particularly New York City, could lead the way in adopting some of the human rights goals that championed equality.

“New York is one of the most powerful cities in the world … I cannot emphasize enough how much of a moral obligation our city has, given that the city is a leader in finance, fashion, medicine, and art,” she said. “We can serve as a model to other cities, for how we treat people, how we value our citizens and their rights as human beings.”

Tewari said that because gender equality was specifically stated as one of the “17 Sustainable Development Goals” from the U.N. for this year, it was essential that cities like New York lead the way in that area.

Aid for children in war areas

Children who are living in war or disaster areas should also be a focus for the international community, according to Laura Perez, the Helen Hamlyn Senior Fellow at Fordham’s Institute of International Humanitarian Affairs.

About one in four children currently live in a country affected by conflict or disaster, said Perez. More than 50 million children migrated across borders or have been displaced by conflict from 2005 to 2015, Perez said, highlighting a 2016 report from UNICEF. This can have devastating long-term effects. 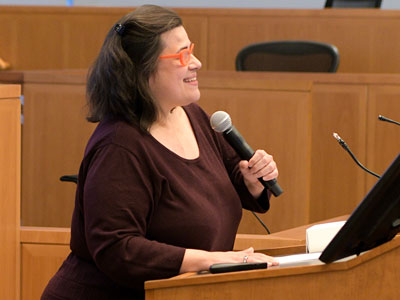 “Refugee children forced from their homes are five times more likely to be out of school than other children,” she said.

Next steps for gender equality

In an effort to continue the work brought about by the featured U.N. conferences, Houry Geudelekian, who chairs the Non-Governmental Organization Committee on the Status of Women (NGO-CSW/NY), spoke of her organization’s efforts in working with the “Generation Equality Movement,” which aims to put together the “most comprehensive blueprint to achieve women’s empowerment and gender equality.”

The goal is to bring together stakeholders from across the world and gather their ideas on six major themes that impact equality for women: environmental protection, freedom from violence and stigma, poverty eradication, inclusive development, peaceful societies, and gender-responsive institutions. Through both online and in-person events in France and Mexico in 2020, the effort aims to “chart an agenda of concrete action to realize gender equality before 2030.”