skip to main content
Return to Fordham University
You are at:Home»Arts and Culture»The Year of Thinking Magically

This year, Fordham College at Lincoln Center (FCLC) has infused its first-year students’ experience with a little magic. 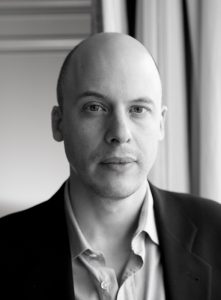 Before they even set foot on campus, students were asked to read Lev Grossman’s The Magicians. The novel, which has inspired an ongoing television series on the SyFy network, examines the practice of “magic” in the real world. It will act as a touchstone for conversation and creative thinking at events throughout the year, which have already begun in earnest.

The initiative is part of a concerted effort to create camaraderie through critical thinking about a particular subject, said Fred Wertz, Ph.D., acting dean of FCLC.

This year, Grossman holds Fordham’s Mary Higgins Clark Chair in Creative Writing, which will bring him to campus to teach and to deliver a lecture on Oct 15.

Though magic exists in the realm of fantasy, Grossman said it can also explore deeper truths than some nonfiction.“I don’t really believe fantasy is an escape—it’s unfortunate that it’s called that. Fantasy and magic are ways at getting at real issues,” he said. “Shakespeare trafficked in all manner of ghosts, so did Dante and Milton, they were all fantasists dealing in emotional reality.” [Read Fordham News’ Q&A with Grossman]

Mary Bly, Ph.D., FCLC associate dean and professor of English and chair of the Freshman Book Committee, said Grossman was chosen for his best seller’s intellectualized look at magic.

“Magic is imagination at its most powerful point,” she said. “It’s not to say magic is real, but this is how people think.”

“The committee’s hope was that the freshman book would provide a fruitful, substantial base for intellectual discussion,” said Bly. “In fact, students challenged the book on a number of grounds that included its lack of diversity and perceived issues around gender relations. Grossman was excited to hear about the generative engagement in his book.”

In the upcoming lecture, Grossman said, he’ll explore a variety of themes, from magic to the professional lives of writers and even changes that have occurred since he wrote the book in 2009. He’s happy to have the chance to address the students’ concerns about the book in person.

“I hope students will feel comfortable bringing that up personally at the Q&A at the lecture,” he said.

Wertz said the dean’s office has encouraged participation in the magical theme throughout many University departments, from Mission Integration and Planning to Student and Residential Life.

Last month, Louise Mirrer, Ph.D., former Fordham lecturer and president of the New-York Historical Society, gave first-year students free access to the museum’s exhibition The History of Magic. Students went with advisers, including Wertz and Bly, who took the group to nosh on tacos afterwards.

Professors have also brought magic into the curriculum in the fine and performing arts, the humanities, and the natural and social sciences. Anthropology professor Stewart Guthrie, Ph.D., is teaching a course called Magic, Science, and Religion. Starting Oct. 19, Wertz himself will be offering a series of sessions called LC After Dark for residents and commuters.

The sessions will center on I Ching (Book of Changes), the oldest of the five classics of Confucianism.

“I will invite freshmen to discuss whether and in what way we might call divination ‘magic,’ and I will relate I Ching reading to such long standing spiritual activities as the exercises developed by St. Ignatius,” said Wertz. “It is noteworthy that the first person to translate the I Ching, into Latin, and to introduce it to the West was the Jesuit Jean Baptiste Regis.”

In the performing arts realm, Fordham Theatre will hold a talk on Nov. 19 at 5 p.m. on theater magic by Adeola Role, an actress playing in the ensemble of Harry Potter on Broadway. The dean’s office will give away two sets of tickets at the show at the talk. And this spring, students from Alvin Ailey will stage a performance based on the hand movements seen in the show. There will also be events focused on the TV show that is based on The Magicians. Residential life will hold periodic screenings of the show (with pizza!).

Bly emphasized that beyond stage and screen, beyond popular books, there are practical reasons for engaging magical thinking.  She riffed on the famous quote from Ghandi, saying that in order to be the change you want to see in the want in the world, you need to imagine the change.

“The ability to imagine something and make it work, wave a wand, is not just the first step in magic, it’s also the first step in everything creative, in writing, in acting, or in a scientific experiment,” she said.