skip to main content
Return to Fordham University
You are at:Home»Colleges and Schools»Fordham College at Lincoln Center»Lincoln Center Reunion Celebrates Fordham’s Place in Manhattan
Photos by Chris Taggart, Video by Nile Clarke
At the June 7 Block Party at Lincoln Center, which celebrated alumni from several schools at Fordham’s Manhattan campus, it was the campus itself that stole the show.

Nearly 700 alumni and faculty gathered on campus to share memories—from those early days on 60th Street to today. The evening began with intimate receptions for the various schools and ended with a crescendo of dancing and revelry under tents on the plaza. Gifts from FCLC alumni to the University in the past year totaled more than $1.6 million. 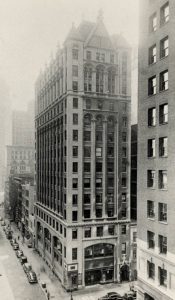 Interspersed with home movies and video, the deans’ presentation riffed on what they saw on the screens. The first movie, shot in black and white, depicted the move of the schools of education and business from 302 Broadway, where plaster had been falling on desktops, to the modern new Lincoln Center digs. A group of young men and women locked arm in arm made their way across the plaza to “Let the Sunshine In” from the musical Hair. The second video struck a more promotional tone. Created in support of the Fordham Theatre program, it featured actors Denzel Washington and Patricia Clarkson and was set to the background music of Frank Sinatra’s “New York, New York.” The final video employed present-day drone footage of the sleek Fordham Law building and the Manhattan skyline.

Shea reminded the audience that the ambitious 1968–1969 move coincided with a University financial crisis so severe that Fordham had little money for faculty, let alone fellowships. Bristow recalled men wearing sandwich boards advertising the University in Grand Central Station—to which Shea replied, “I never wore a sandwich board.”

But the risk, it turns out, was well worth it. The move further cemented the University’s place in Manhattan and the rights to a world-famous name: Lincoln Center.

Throughout the evening, alumni from several decades reminisced about their days on 60th Street. For all the changes across campus, the Pope Auditorium was exactly as Rosie Gunther-McCooe, FCLC ’85, remembered it. Gunther starred in the Fordham production of Cabaret opposite John Hickey, FCLC ’85, who would later reprise his role as Clifford Bradshaw in the  Broadway production of the show. She, like all first-year theater students, was required to build sets and work on the technical aspects of the show before setting foot on the stage as an actor. Today, Gunther-McCooe mounts children’s productions in the public schools in Ridgewood, New Jersey, and keeps the kids on point by making them learn the technical aspects of the show before setting foot on stage as an actor. 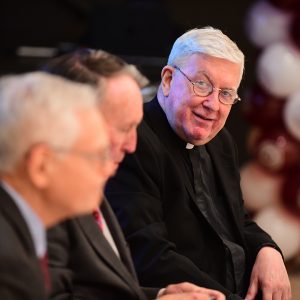 “It’s all about the writing,” said Gunther-McCooe.

All three credited their liberal arts education for broadening their perspective beyond their focus of study.

In his concluding remarks on the panel, Bristow emphasized as much when he noted that the liberal arts are under attack, and that Jesuit institutions are more than qualified to defend them.

But what is a Jesuit education to alumni and staff from the Lincoln Center campus?

At a reception for the School of Professional and Continuing Studies, Nancy Perri, PCS ’11, a staffer in Fordham’s Controller’s Office, said her Jesuit education meant learning more about her faith through the core courses on philosophy and theology. It also meant that she could make a quick dash down the hall and receive ashes on Ash Wednesday.

For Jenny Rolon, FCLC ’10, GSAS ’14, who was at the FCLC reception, her education went beyond the books. She was there with her daughter, Hannah, waiting for her husband, Daniel Rolon, FCLC ’08. She said that the Jesuit notion of caring for the whole person, or cura personalis, is something she keeps in mind in her work as an administrative assistant in an oncology department and as a mother.

“If patients are upset about finances, or scheduling, or about life going on even though they have cancer, I try to keep that in mind and help them as a whole person,” she said. “If Hannah’s crying because she’s teething, I realize she has feelings, thoughts, and ideas that are independent of my own and I should respect that—but I also take care of the fact that she’s teething, because she’s a baby.”

“Our job is very selfless,” said Christina DiLorenzo, GSS ’16, who works as a school counselor. “We are here to serve. You don’t get much recognition, but we are here because we want to be here.”

Being of the Neighborhood

For others, the Jesuit ideal boils down to participating in the community. Both Father Grimes and Cira Vernazza, FCLC ’77, GSAS ’86, associate dean at PCS, recalled the late George McMahon, S.J., former dean of Fordham College at Rose Hill and vice president for Lincoln Center, playing basketball with students in the courts near campus. Vernazza recalled him playing with Denzel Washington, FCLC ’77, and Father Grimes said he would sometimes play after putting in 12-hour days. Often known as “Father Fordham,” Father McMahon was the namesake for McMahon Hall, the Lincoln Center campus’s first residence hall, which opened in 1993.

“He couldn’t pass a court without playing,” said Father Grimes.

“I met lots of older students who were in their 50s and 60s taking classes at night,” said Mazzella.

“All nationalities, all religions, and all races,” Piszko chimed in.

“But that was what we knew as city people,” said Medina-Clark. “For us, we didn’t see it as diverse, we saw it normal.”

For some graduates, the notion of the Fordham community in New York City stretched will beyond campus.

“We have a lot of great alumni in the workplace,” said Sherry Wang, GABELLI ’17, who works at Deloitte. “Every time I contact an alum, like on LinkedIn, they always respond and help, or connect me with other people who can help.”

And yet with each passing year, that synergy with the city builds, and the already diverse campus community becomes even more so, said Father Grimes. He noted that interest in FCLC is no longer limited to the New York City region, but increasingly, students from around the country and the world apply. And while FCLC and Fordham College at Rose Hill in the Bronx are equally known for rigorous liberal arts education, Father Grimes noted that FCLC’s location is central to its identity.

“This is the liberal arts on West 60th Street,” he said, “and that makes the difference.” 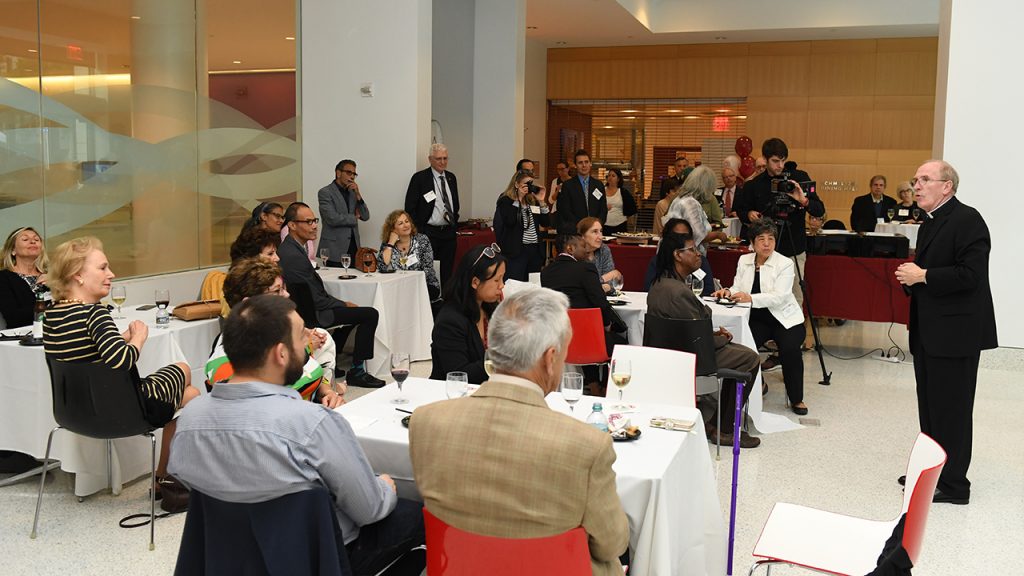 Joseph M. McShane, S.J., president of Fordham, addresses the Graduate School of Education at one of several school receptions held at the reunion. Photo by Bruce Gilbert