140 West 62nd Street, the four-story building that was Fordham’s first home at Lincoln Center, was feted in a rededication ceremony on Sept. 28 following a two-year, $70 million renovation.

The blessing and ribbon cutting ceremony, which was held inside the airy Platt Court atrium, was the official kickoff for what is the building’s third act. It first opened in 1961 as the home of the School of Law, was expanded in 1985, and was fully vacated in 2014, when the law school moved into its new home just west of the old building. 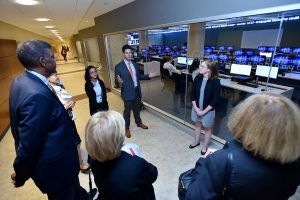 Students took guests on tours of the building.
Photo by Dana Maxson

After a gut renovation, the new building, dubbed 140 West, now serves as home for the Gabelli School of Business, the Quinn Library, and a student center.

At a dinner celebration, Joseph M. McShane, S.J., president of Fordham, said the new renovation had, along with the newly constructed Law School and McKeon Hall, finally created a vibrant, all encompassing campus.

One way this was accomplished was the addition of an entrance to 140 West on the side facing the Robert Moses plaza; in the past, it was only accessible via the West 62nd Street side.

He said that, when looking out from his second floor office at the Lowenstein Center, he’s noticed more students than ever enjoying themselves on the plaza. It now feels like a traditional quad.

What distinguishes Fordham, he said, is the way students seamlessly move from intellectual formation to character formation to networks to friendship building. 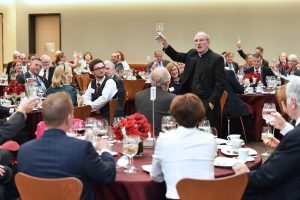 “Every day you convince us that what we’re doing is important, noble, sacred, and world changing,” he said, thanking the students in attendance. “Every day we see you dreaming, and going beyond dreaming to action. You redeem for us every day our belief in the values and the core vision that is behind everything that Fordham has tried to do for 175 years.”

Bob Daleo, chair of the board of trustees, called the renovation a key strategic move that has created much-needed space for students. The addition of the law school and the renovation of 140 West 62nd Street added a total of 570,000 square feet to the campus.

“We have gone from a vertical campus, which was the essence of the Lowenstein Center, to a real campus here where students go from building to building, and into a library [that]is now filled with light,” he said. The previous location of the library was in a windowless, below-ground area of the campus.

Fordham College at Lincoln Center senior Tyler Tagliaferro lent his bagpipe-playing skills to the ceremony with a rendition of The Ram. A native of Cleveland who plays competitively, he said he’s also taken advantage of living at the Lincoln Center campus by busking in Central Park.

The reopening of the building came at a perfect time for him, he said.

“I love that they’ve opened this plaza in front of the school, and that we can use more of the green space on campus,” he said. 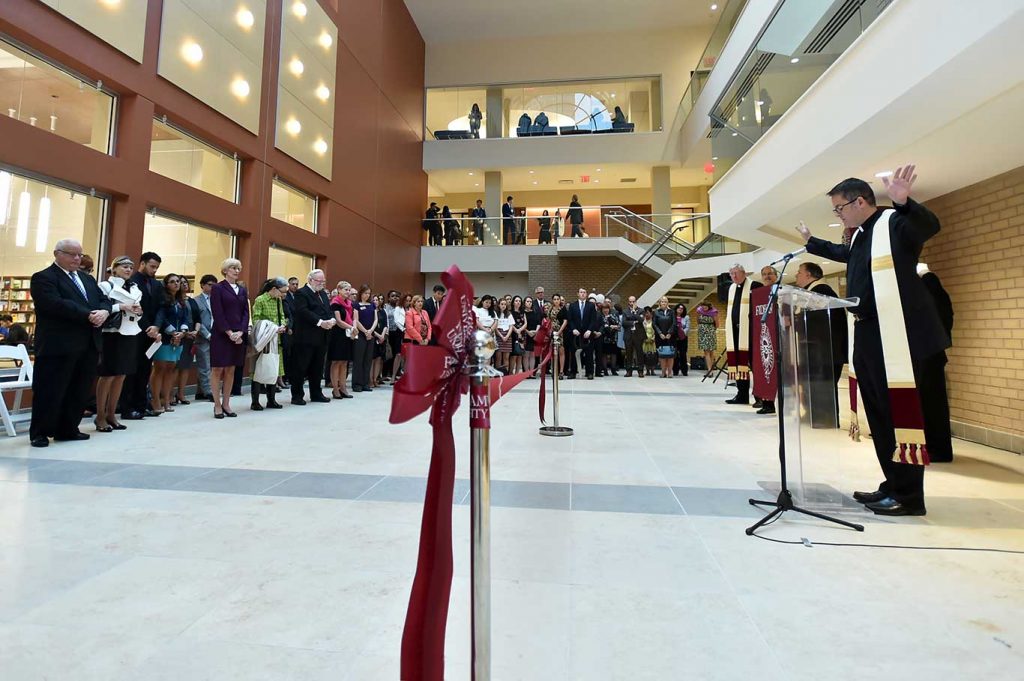