skip to main content
Return to Fordham University
You are at:Home»Colleges and Schools»Fordham College at Lincoln Center»Curtain Rises on Act Three for Former Law School Building 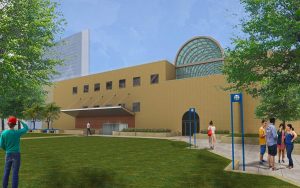 A rendering of the Plaza level of 140 West 62nd Street.

140 West 62nd Street, the home of Fordham Law School for over five decades, is poised for a new life.

The building is in the midst of a two-year-long, $70 million renovation that will transform it into a home for the Gabelli School of Business, a new student center, and an expanded Quinn Library.

It’s the second major renovation for the space, which first opened in 1961 and was expanded in 1985. Brian Byrne, vice president for Lincoln Center, said a full gut renovation was needed because the original structure was designed to meet building codes from 1938. Though it was “well-maintained but care worn,” it is getting new heating, mechanical and air conditioning systems, as well as steel reinforcements of several floors.

It will be more energy efficient too. A new reflective roof will be installed, along with a generator that will allow the University to disconnect from the city’s power grid on days when extreme heat is straining the grid.

On the building’s exterior, a new glass-curtain wall on the north side will open up interior space to more light. On the south side, a new entrance, made possible by the removal of the law school library’s stacks, will connect the building to the Robert Moses Plaza for the first time.

For the Gabelli School, 140 West 62nd will combine with the newly acquired building across the street at 45 Columbus Avenue to create a defined home base at Lincoln Center. 140 West 62nd Street will draw together classrooms and social areas, meeting rooms for group projects, a suite for academic and career advising, and boardroom-style space all under one roof. Technology will be prominent, with one room reserved for a bank of 42 Bloomberg machines.

A rendering of the Gabelli School of Business Bloomberg computer lab.

The additions will support the expansion of the Gabelli School at Lincoln Center in both directions. The undergraduate population is increasing—about 170 freshmen and sophomores are enrolled in the new BS in Global Business program, with two classes to be added by fall 2017. On the graduate end, two doctoral programs are pending New York State approval: a PhD and a Doctor of Professional Studies degree. These students will work alongside one another in the new building, reflecting the unification of the undergraduate and graduate business schools that took place in February 2015.

“This building is designed to encourage interaction,” said Donna Rapaccioli, PhD, dean of the Gabelli School. “There is an advantage to having faculty, doctoral students, master’s students, and undergraduates in the same space to share ideas, and there is an added benefit from the layout of the building itself—it was designed to support teamwork, which, as we always remind our students, is an inescapable feature of today’s business world.”

Three new floors of space for the Quinn Library will enable researchers and staffers to come in out of the basement—literally—into the daylight, thanks to the building’s atrium. 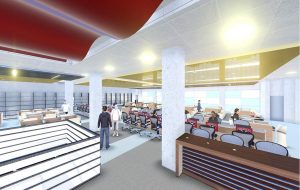 A rendering of the new Quinn library space.

Linda LoSchiavo, head of the Fordham Libraries, said that moving out of the lower level of the Lowenstein Center will make Quinn a dramatically different and more dynamic environment, where each of its three floors will have its own distinct feel.

The first floor will contain the book stacks, PCs, study areas, and a small café space. The second floor will feature the reference, reserve and circulation desk. And the third floor will have a quiet zone for studying. The current space confines everything to one open, windowless room that is much too small, she said.

“We are combining the traditional aspects of a library and of library services with a new culture that leans more toward a learning commons,” LoSchiavo said. “We’re finding that there is a lot of learning taking place outside of the classroom. Libraries in general have become integral links to the academic enterprise.”

On the ground level, the student center space will expand by approximately tenfold, said Keith Eldredge, dean of students at Lincoln Center. When McKeon Hall opened last year, the residential population at Lincoln Center ballooned from 850 to 1,200 students; another 100 are expected to move in next year.

To accommodate them, the former law school cafeteria is being transformed into a large multipurpose room that can accommodate up to 250 people, and small meeting rooms. 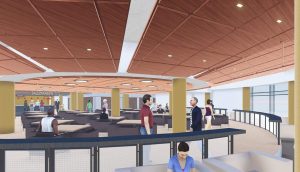 A rendering of the new student center.

The Departments of Career Services, Multicultural Affairs, Student Leadership, and Health Services and Counseling will also move into the space, making it easier to provide seamless service to students.

Dedicated space for student clubs is also a big draw, said Eldredge. He noted that the yoga club currently has to meet in a classroom in the Lowenstein Center.

“The chairs have wheels on them, so they are pushed to the corner and everyone brings a yoga mat. But you know, the fluorescent lights of a classroom with a smart board in the front of the room isn’t the most conducive space for it,” he said.

“A carpeted room that’s more multipurpose can be used for a student group meeting at a table, for yoga, or for small presentations,” he said. “The new space will give us more versatility.”