skip to main content
Return to Fordham University
You are at:Home»Campus Locations»Lincoln Center»Chinese and U.S. Scholars Trade Philosophy Ideas at Fordham
Weiping Zheng, an epistemologist from Xiamen University, speaks about the rules behind making assertions. Photo by Taylor Ha
What rules govern the way we speak?

That was one of the many topics debated on by leading philosophers from the U.S. and China at the New York-China Epistemology Conference held at Fordham’s Lincoln Center campus from Oct. 18 to 20. 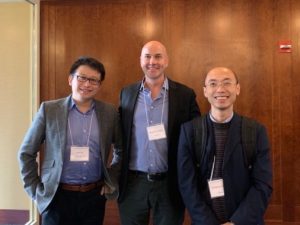 Their talks covered a variety of topics, including “Intuition, Understanding, and Self-Evidence,” “Imagination and Understanding,” and “Can Closed-Mindedness be an Intellectual Value?” And the scholars who delivered them were just as diverse. Among them were U.S. philosophers from schools including Harvard, Princeton, Cornell, and the Massachusetts Institute of Technology, as well as Chinese scholars from highly ranked universities like Peking, Fudan, and Nanjing.

“A Model of International Cooperation”

Their lectures explored the research of past philosophers and their own. About half of the presentations were accompanied by commentary from their peers. For example, after an MIT professor spoke about “Higher Order Evidence and the Perspective of Doubt,” a Chinese epistemologist critiqued and reflected on her work. 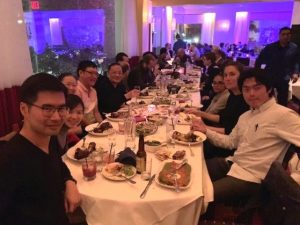 U.S. and China epistemologists eat dinner together at Rosa Mexicano, a restaurant near Lincoln Center campus, on Oct. 19. Photo courtesy of Stephen Grimm

“I was hoping that the conference would lead to deep and lively exchanges about issues of common concern in epistemology [the study of knowledge, particularly with regards to its validity and scope], and I’m delighted to say it did,” said Stephen Grimm, Ph.D., Fordham’s philosophy department chair. “I was also hoping the conference would provide a model of international cooperation between our countries—and on that score too, it exceeded all my expectations.”

To Assert or Not to Assert?

One of the Chinese philosophers was Weiping Zheng, a scholar from Xiamen University. His topic was “Norms of Assertion and Chinese Speech Wisdom,” which explored the rules that allow us to state a fact or a belief, what kinds of assertions we should make and shouldn’t make, and how ancient Chinese wisdom can help us evaluate what we should say before we actually say it.

One rule of assertion, he said, is that we should only assert things that are true. Zheng argued that this rule is too restrictive. Some assertions may be true, but morally wrong.

“For example, [let’s say] I am dying. And you say [to me], you are dying. You are epistemically right, because it is true that I am dying. But you think it is morally right [to say this]?” he asked. “That’s why I want to find hierarchy of different norms of assertion.”

One way to help you make morally sound assertions, he continued, is by following a Confucian concept called Li—an ancient Chinese form of wisdom.

“It’s part of [this] wisdom that we’re gonna be virtuous, good, kind, proper, and all of these things. We’re thinking of that as the thing we’re always supposed to be answerable to,” explained Jane Friedman, a philosophy professor at New York University, who also delivered a lecture at the conference. “Whereas if all you have is a rule that says, ‘Yeah, if something’s true, it’s okay to say it’ … I think part of what he wanted to drive home was no, of course that’s not fine. We need another kind of principle governing what we’re allowed to say and when. The place to look to is this notion of Li in Chinese philosophy.”

“It does seem like an interesting guide and a way of thinking in a more holistic way about the practice of asserting things,” Friedman said. “I like thinking about this general idea of wisdom, what that might entail, and how it might be a guide to what I should say and when.”