skip to main content
Return to Fordham University
You are at:Home»Campus Locations»Lincoln Center»A Mom and Marine: Alumna Rises to Second Lieutenant
“I was drilling my recruits, doing homework, taking care of my kids, and coming back the next day to do it all over again.”
As Lindsey Gonzalez strides through Columbus Circle on an unseasonably warm winter afternoon, the recent Fordham graduate looks like any New Yorker between appointments. Fit and smartly dressed, one could imagine her meeting up with friends for lunch.

What one would probably not imagine is Gonzalez shouting orders into the face of a boot camp recruit. But that’s what Gonzalez does: She makes Marines.

“I haven’t been screaming at recruits for over two years now, but if I put my uniform on, the adrenaline comes back and I’m a different person,” said Gonzalez.

Gonzalez put training young recruits on hold to attend the School of Professional and Continuing Studies with the NROTC. She majored in communication and media studies with a focus on film. On completing her coursework she was commissioned second lieutenant at a ceremony held at Fordham’s Rose Hill campus on Jan. 6 and officially graduated on Feb. 1.

Gonzalez’s 18 years of service in the U.S. Marines, the most male dominated branch of the military, is enough to impress, but the fact that she’s advanced to lieutenant while raising five children takes her accomplishments to another level. Yet she redirects credit to her husband and her parents, both of whom she says made it all possible. 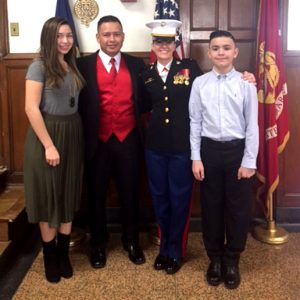 “My family has been with me every step of the way, each time I reenlisted—and it’s not like I came from a huge military family,” she said.

Gonzalez enlisted straight out of high school in 1999. Four years later, when her first child was just 10 months old, she was deployed to Iraq.

At the same time, her husband Patricio Gonzalez, also a Marine, was deployed to Bahrain. Her parents stepped in to take care of their daughter in her home state of Washington.

After her husband left the military in 2005 and following her deployment, the family continued to grow. Their daughter, Skye, is now 14, and there are four boys: Emmanuel, 12, Samuel, 10, and twins Noah and Devin, 7.

All the while, Gonzalez continued to advance her career in the military, which included taking classes online as part of the Marine Corps Enlisted Commissioning Educational Program. She said that her husband, who is from New York, researched veteran friendly colleges and found Fordham. She began classes online while she continued to train recruits in South Carolina.

“I was drilling my recruits, doing homework, taking care of my kids, and coming back the next day to do it all over again,” she said. 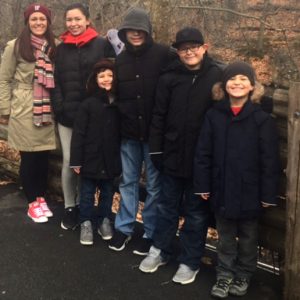 The family eventually settled in Bayside, Queens near her husband’s family. She started taking classes on campus at Lincoln Center, where she developed a passion for film.

“I was never analytical about film,” she said. “Taking classes really helped me look at things from different sides of the spectrum. In the military I have to be open-minded and see things from all angles.”

She said that her favorite classes focused on ethics and moral struggles as they related to media and film. But while there were practical aspects to studying film, at the end of the day she just “enjoyed the subject.”

“I didn’t want it to be a job to come to school; I wanted to take it beyond that.”

Gonzalez said that, although she could retire in two years, she plans to stay another 13, bringing her to 30 years of military service.

“It’s a long time, but the military has been very good to me,” she said. “I would have never had the opportunity to come to Fordham without it.”