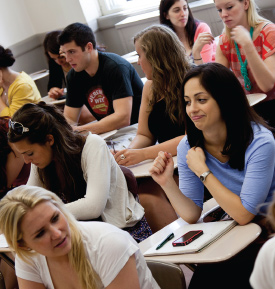 The University passed 40,000 undergraduate applications in January, driven in part by the expansion at the Lincoln Center campus.

Undergraduate applications to Fordham topped 40,000 for the first time this year, significantly boosted by the development of the Lincoln Center campus and the expansion of academic programs there, said John W. Buckley, the University’s associate vice president for enrollment.

This is the 23rd consecutive year in which the number of undergraduate applications has grown, Buckley said.

He noted the attractions of new programs such as humanitarian studies and integrative neuroscience being offered at the Lincoln Center campus, along with the new program in global business that the Gabelli School of Business will offer at the Manhattan-based campus this fall. Fordham College at Lincoln Center experienced a 57 percent increase in freshman applications. The Gabelli program has drawn 2,109 applications for approximately 50 freshman slots.

“The academic programs are certainly playing a role in this growth,” he said. “The other critical element, of course, is the fact that we’re now going to have a beautiful new residential facility for freshmen at Lincoln Center,” he said, referring to the 400-bed residence hall opening in the fall.

He also noted the encouraging growth in applications from distant markets including California (11 percent), the South (14 percent), and the Midwest (19 percent).

Referring to international growth, Buckley said, “The inherent strengths of the University, the opportunities that we offer, and our location in New York City are all powerful attractions.”

The deadline for the applications was Jan. 1, and decisions are expected to be sent to students by the third week in March, Buckley said.