Evan Nasky, a National Merit Scholar and a promising actor, was 21 years old when he committed suicide. The tragedy came as a shock to his loved ones, who said they had not even known that Evan was depressed.

Laurie Boncimino, a college student in Michigan with a passion for social service, was 20 when she committed suicide. Joshua Anderson, just 17, never made it to his freshman year.

Their stories were among hundreds featured in a traveling suicide prevention exhibit that stopped at Fordham’s Rose Hill Campus on March 30. More than 1,100 empty backpacks—many of them bearing photos and stories donated by deceased students’ families—were scattered across Edwards Parade as a powerful illustration of the number of college students who die each year by suicide.

The daylong exhibit was a prelude to Fordham’s Mental Health Awareness Week. Beginning April 7, the week will feature events such as music therapy and a Fordham TED Talk in an effort to raise campus-wide awareness about the importance of cultivating mental health as well as seeking help for mental illness. 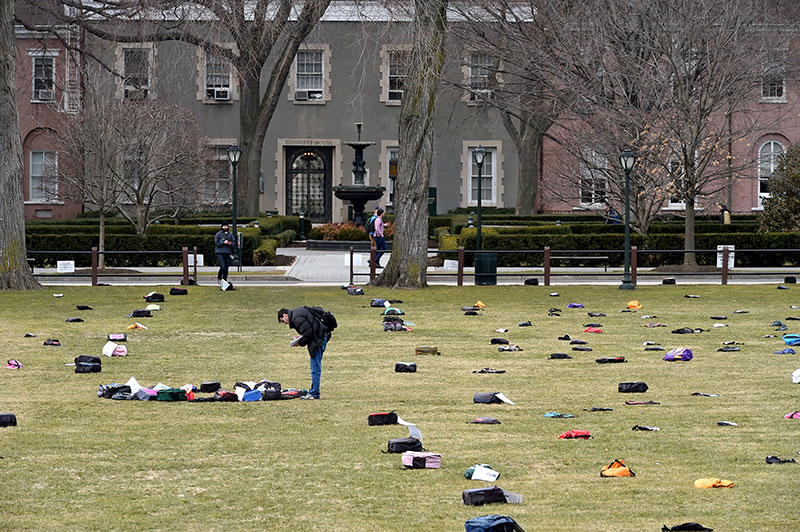 The exhibit features 1,100 backpacks to represent the number of students who die by suicide each year. Photos by Dana Maxson
Full gallery below

“There is a misconception that people are entirely responsible for their own psychological and emotional struggles. Many people wrongly believe that someone suffering from a mental illness can just snap out of it,” said Jeffrey Ng, PsyD, director of Counseling and Psychological Services.

“The goal of this awareness week is to show that we all have a role to play in optimizing our students’ wellness and mental health.”

Hand-painted signs lining Edwards Parade told sobering facts about mental illness among 18- to 24-year-olds—for instance, that suicide is the second leading cause of death among college students and that as many as 44 percent of students report having felt so depressed in the past year that it was difficult to function.

Find a full list of Awareness Week events here.
“The stigma that’s associated with suicide and mental illness forces people into silence and seclusion, which can lead to more unhealthy coping strategies,” said Send Silence Packing coordinator Lee Duffy-Ledbetter. “This exhibit is meant to get people talking about these issues so we can start to reverse that stigma.”

Send Silence Packing is an initiative by the national mental health awareness organization Active Minds, a nonprofit founded in 2003 by then-college student Alison Malmon after losing her 22-year-old brother to suicide. Since its launch in 2008, the exhibit has traveled to more than 85 cities nationwide to shed light on college student suicide and to promote healthy dialogue about mental health.

Fordham College at Rose Hill juniors Gloria Siclari and Catarina Araujo established the first Active Minds chapter at Fordham, joining more than 400 other student-led chapters across the country. The duo managed to secure Fordham as the first stop on the Send Silence Packing spring 2015 tour, which will visit colleges and universities throughout the northeast from March 30 to May 1. 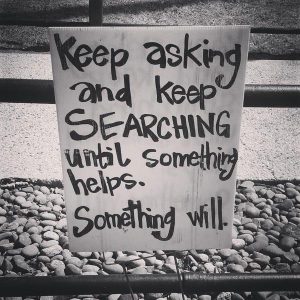 “You can’t ignore this display,” said Siclari, who has lost several family members to suicide. “I think it’s amazing we’ve had this ability to touch so many students on campus today. It’s not easy to talk about these issues, but we have to.”

“In so many of these stories, families said that they didn’t see the signs,” said Rose Hill junior Vanessa Agovida as she wandered through the rows of backpacks. “It makes me wonder about the people around me who might be hurting and are hiding it really well.”

Mental Health Awareness Week kicks off this afternoon with a tabling event at the McGinley Center, which will be followed by a “stress buster” training at the CPS office.

“I want students to know and understand that they’re not alone in their struggle—that there’s help, resources, and support available,” Ng said. “There’s no shame or weakness in reaching out. It’s a sign of strength and maturity to ask for help when we need it.”