For almost 35 years, from 1967 until her death in 2002, Sister Mary Patrick McCarthy, G.N.S.H., GSE ’76, was the principal of Blessed Sacrament School in Jackson Heights, Queens. It was a community she held close to her heart, having grown up in the neighborhood and started her schooling at Blessed Sacrament at age 6. On Nov. 18, 2012, 10 years after her passing, the Rev. Patrick Burns of Blessed Sacrament Parish and New York City Councilman Daniel Dromm renamed the school’s block of 94th Street between 34th and 35th avenues “Sister Mary Patrick McCarthy Way.” 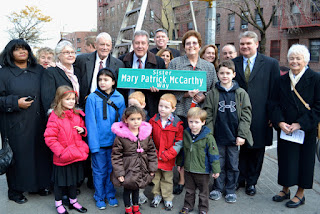 John McCarthy (behind boy in blue coat) at the ceremony unveiling a street sign named in his sister’s honor. Photo courtesy of the Office of Councilman Daniel Dromm

A sign unveiling ceremony took place that morning, and among the hundreds in attendance was her younger brother, John McCarthy, Ph.D., FCRH ’60, professor emeritus of history at Fordham. “It was nice to see old friends and classmates who had come from so far,” said McCarthy, who remembers playing “a lot of stickball and marbles up and down that same street corner.”

It was once the type of street where milkmen delivered glass bottles of milk from horse-drawn carriages to each house, but 94th Street saw many changes throughout McCarthy’s life—including the closing of her beloved school. Blessed Sacrament closed its doors in 2009, one of many Catholic schools to be shuttered recently in response to low enrollment.

Sister Mary Patrick was born in 1935, entered the Grey Nuns of Sacred Heart in 1954, and received her master’s degree from Fordham’s Graduate School of Education in 1976. She and her family grew up just down the block from Blessed Sacrament in a community of European immigrants, including her parents, who were from Ireland.

During her time as principal of Blessed Sacrament (now P.S. 280), the Jackson Heights community experienced a shift—from Irish and Italian immigrants to more Central and South American in the 1970s and 1980s. In response to this change, she started scholarship programs at Blessed Sacrament and advocated for English as a second language. With immigrant parents, she “was able to relate to the old and the young,” said John McCarthy. She handled the ethnic shift with ease, but in 2002, Sister Mary Patrick McCarthy was diagnosed with breast cancer and died June 17, 2002.

John McCarthy is especially proud of his sister for all the time, energy, and love she devoted to Blessed Sacrament and its community. His 12 grandchildren attend parochial schools.

If you ever find yourself in Jackson Heights near 94th Street, look up! You just might be on Sister Mary Patrick McCarthy Way.