skip to main content
Return to Fordham University
You are at:Home»Campus Life»Red Carpet Rolled Out for Class of 2016 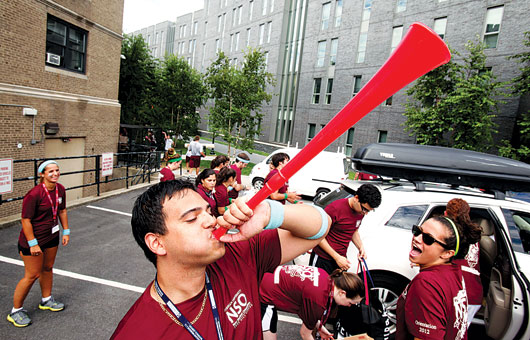 FCRH senior Chris Hernandez, center, was one of the volunteer upperclassmen greeting new Fordham freshmen at Martyrs’ Court—with a vuvuzela. The University welcomed some 1,870 students in the new class.
Photo by Bruce Gilbert

On a day when the sun shone with almost perfect warmth and brightness, Fordham welcomed the Class of 2016 to its Rose Hill and Lincoln Center campuses with a mix of exquisitely executed logistics and unbridled enthusiasm.

In the Bronx on Aug. 26, cars began filing through the University’s main gate before the 8 a.m. scheduled arrival time. Joseph M. McShane, S.J., president of Fordham, Monsignor Joseph G. Quinn, vice president for university mission and ministry, and members of the New Student Orientation (NSO) team greeted them with bottled water, and directions to their respective residence halls. 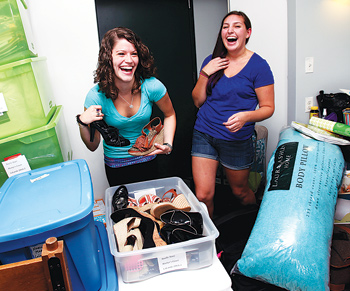 New roommates Noelle Starr and Lauren Lopez show off a few of their favorite things in their room at Martyrs’ Court.
Photo by Bruce Gilbert

Fordham College at Rose Hill (FCRH) senior Chris Hernandez was one of the students waiting for them at Martyrs’ Court. When a new student’s car pulled up, he added to the students’ cheers a distinct “HOOOOOOOOO” of a vuvuzela horn that he brought from home.

“It gets them really hyped,” he said with a laugh. “I just have lots of energy. I’m the vuvuzela guy.”

Inside, Lauren Lopez was meeting her roommate Noelle Starr for the first time. They’d conversed via Facebook all summer, but since Lopez lives in Dallas, Texas, they’d never met in person.

“My aunt lives in Connecticut, so we just happened to look at the school, and I fell in love with the campus,” she said of her decision to move 1,500 miles away from home.

“I couldn’t resist. I got a scholarship, and that just sealed the deal.”

At Loschert Hall, Montville, N.J., native Haroon Mian was mulling which of the three beds he would take, having arrived before his roommates. Mian was accepted into Fordham’s Cooperative Program in Engineering, which entails three years of study at Fordham and two at Columbia University, after which he’ll graduate with a bachelor of arts from Fordham and a bachelor of science from Columbia.

“I’m Muslim, but I admire how Catholic schools are run. When I told my teachers I was going to Fordham, they told me it was a really good education,” he said. 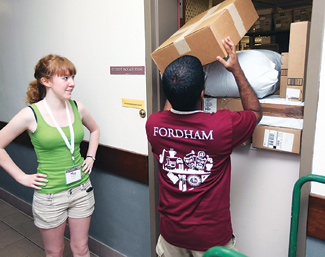 Oregon resident May McCallum gets a little help at the Lincoln Center campus post office, where her things arrived via mail.
Photo by Michael Dames

As the Fordham College at Lincoln Center campus was hosting a welcome for nearly 150 commuter students on Robert Moses Plaza, more than 250 new residents were settling in at McMahon Hall. The hall’s move-in times were staggered to accommodate arriving families in the dozen available parking spaces—likely the only free ones in Manhattan.

Scores of orientation leaders were at the ready with giant cardboard moving boxes and luggage racks, impulsively gleeful as they helped families unload their stuffed trunks.

On the 5th floor, freshman Jacqueline Llopis, of Arlington, Va., and her parents, were greeted by suitemates Jasmin Chacko, from Teaneck, N.J., and Alison Kowal, from Western Springs, Ill. They were expecting a fourth suitemate from New Delhi, India, to arrive.

“I like the city setting,” said Llopis, taking in the urban view from her bedroom window. “Fordham Lincoln Center’s where I want to be.”

Kowal was already unpacked; she came two days early to participate in the Urban Plunge program, where she and other freshmen spent a day painting apartments in the low-income Amsterdam Houses.

“It was a great way to get acquainted with New York,” she said.

While others unloaded from Grand Caravans and Toyota Camrys, May McCallum hoisted several shipping boxes from the dorm’s mailroom window onto a dolly.

“My mom went kind of crazy,” said the Eugene, Ore., native. “But we shipped stuff so as not to have to bring it on the plane.” 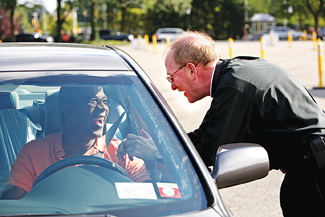 John W. Buckley, associate vice president for undergraduate enrollment, said the class of 2016—1,023 at Fordham College at Rose Hill, 420 at Lincoln Center, and 416 at the Gabelli School of Business as of Aug. 17—is a talented one.

“The acceptance rate is comparable to a year ago, quality measures across the board are up, the ethnic/cultural diversity of the freshman class is similar to the last two years, and the geographic diversity is exceptional,” he said.

The incoming class includes 87 international students, as well as those from 40 states. All 50 U.S. states were represented in the pool of applicants.

Additionally, the class features 175 students who were selected as Presidential, Dean’s and semifinalist scholars.

More than 93 percent of admitted students were offered financial assistance or scholarship funds.

Commuter students like Michael Cibelli also descended on the two campuses to pick up essentials like their I.D. cards, and their on-site lockers. Cibelli, a resident of Morris Park, Bronx, and a Fordham Prep graduate, was with his mother Tina Cibelli, a 1987 Rose Hill graduate.

“I grew up on Arthur Avenue, and I could see the school from my window,” she said, proud that her son was attending. “I always dreamed of coming here, I came to the school, and I fell in love with it.

“Every time I step [back]on campus, it brings a smile to my face.”