skip to main content
Return to Fordham University
You are at:Home»Campus Life»RecycleMania Returns for Second Year 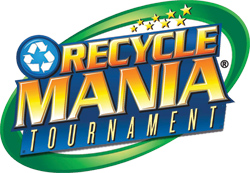 Students who live in the 10 residence halls at Rose Hill and McMahon Hall at Lincoln Center will again compete against each other in RecycleMania, a nationwide recycling competition that began on Jan. 22.

The contest, which runs through March 31, measures the amount of paper, cardboard, glass, metal and plastic the residents of each building collect, as well as how little solid waste they generate. The event seeks to increase recycling on campuses and highlight the work done by universities’ sustainability programs.

Last year was the first year that Fordham participated in the contest, which began in 2001 and has grown to include 576 schools. As in the past, the University will be competing in the “benchmark” division of the competition. Although Fordham will not be directly competing with other schools, the individual dorms on campus will be ranked against each other.

Weekly updates will be issued by sustainability consultant Great Forest and sent to the residence halls weekly so students can track their progress. At the end of the competition, the winning dorm will receive a trophy, along with the satisfaction that they’re the greenest of all.