A 6-foot-1-inch redhead known as Big Red, Winter had chalked up 112 wins, a school record, against just 34 losses, while also setting the Notre Dame record for most home runs in a season. Her proficiency as both pitcher and hitter had earned her a contract with the Akron Racers of the National Pro Fastpitch league. 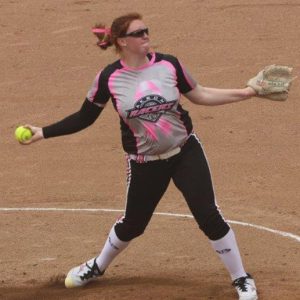 Winter is pitching this summer with the Akron Racers.

But Winter’s success had a price. For months, she had played in pain and, soon after her collegiate career ended, an MRI revealed torn tissue near her right shoulder blade.

That May, she had surgery. Doctors told the 23-year-old that she wouldn’t know for a year whether she would ever again hurl a softball at game speed.

On the drive home to Southern California with her father, she busied herself by sending e-mails to colleges about working as a coach. Among the colleges was Fordham, whose softball squad she had admired while at Notre Dame.

“They won two A-10 championships and three of the past four,” said Winter, a San Diego native. “It was definitely a program I wanted to be a part of.”

She met with the team’s head coach, Bridget Orchard, in June and was named to the coaching staff soon after.

But Winter was also determined to return to the pitching circle as a player. She started rehab by stretching and throwing overhand. But following a setback, she reevaluated.

“This is great, but I don’t want to just throw overhand—I want to pitch (underhand),” she recalled thinking.

She created her own routine, lifting light weights, stretching, and eventually pitching. “I was supposed to be throwing full at nine to 12 months, but I was throwing at eight. It was kind of easier to do it on my own,” she said.

Before long, the scholar and athlete who had thrived in Southern California and the Midwest was in New York, embarking on one more role, that of mentor.

The move to the Bronx was appealing. “I kind of wanted a challenge, something that wasn’t extremely comfortable for me,” she said.

Winter was a strong candidate because of her success as a player, but Orchard saw her relative youth as an asset as well.

Being “straight out of school,” Winter “understood the student-athlete aspect of it,” Orchard said.

And, Orchard said, Winter’s pitching prowess would be of great benefit to the team during drills, once she had recovered from her injury.

“We don’t see anything as good in our conference,” Orchard said.

In September, Winter, who studied information technology management at Notre Dame, will begin graduate studies in information systems. She hopes to eventually apply technology to recruiting and to the collection of players’ statistics.

This summer, however, she is back with the Racers. Just over a year after her surgery, in the Racers’ second game of the summer season, Winter pitched three-hit shutout ball over four innings, striking out three and walking one, and earned the win against the PA Rebellion in her comeback to the pitching circle.

The Racers’ season runs until mid-August. She’ll take a short break before returning to Fordham, where the Rams hope to build on last season’s A-10 championship run.

For now, though, Winter is building on her own success.

“I couldn’t ask for anything more. Anything else that happens this summer is just icing on the cake for me,” she said. “I’m starting to establish where I want to be.”