skip to main content
Return to Fordham University
You are at:Home»Campus Life»Making College a Family Affair

When Rose Hill sophomore Daniel Stroie began the college application process, the last thing he expected was that he and his parents would begin their academic careers in tandem—and at the same school, no less. 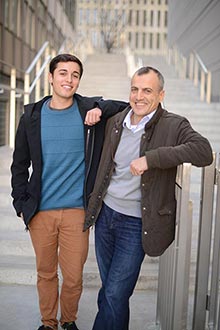 His mother, Margo Stroie, a full-time accountant, thought Fordham would be the perfect fit for Daniel, who is now in his second year at the Gabelli School of Business. Daniel, however, remained uncertain despite his mother’s persistence. He had applied to many colleges and received several acceptance letters, but found that none of the schools jumped out at him. He narrowed his choices down to New York University and Fordham, to which he had been accepted through Fordham’s early action program.

“My parents actually scheduled school visits and attended the open houses at Fordham without me,” he said. “I didn’t want to go simply because my mother wanted me to go.”

But his curiosity led him to revisit the Rose Hill campus just before the decision deadline. He was reluctant to admit it, but he soon realized his mother’s instincts were right.

“After exploring the campus and speaking to current students, I finally decided this was the school for me,” Daniel said. Although he had originally applied for the liberal arts college at Rose Hill, he transferred to the Gabelli School of Business.

His mother, of course, was elated, and to this day “continues to remind him that she was right.”

Margo’s enthusiasm for Fordham also inspired her husband to start thinking about graduate school. Having immigrated to the United States from Romania, Adrian Stroie, a principal at a New York real estate development company, had always wanted to study law.

“It is difficult to attend law school in Romania, as there are few schools,” said Adrian. “Competition is tough, and you have to prepare for many years in advance.”

Adrian found it inspiring to help his son search among schools and apply to them. “I thought maybe I should give it a try as well,” he said.

Soon Daniel and his father were applying to schools at the same time and preparing for their respective standardized tests—Daniel for the SAT, his father for the LSAT.

“While I was working on my college essays, my dad was too. It was great to have someone else in the house going through the same daunting application process,” Daniel said.

Adrian was swayed to apply at Fordham because of Margo’s enthusiasm for the University. In fact, so was she—once Adrian had been accepted at Fordham Law, Margo herself applied to Fordham’s Graduate School of Business.

She dropped the news during a family vacation to Poland, where her family is from. Daniel was flabbergasted: “The first thing I did was shake my head,” he said, noting that he reacted as “typical teenager.”

“But then I came around,” he said. “Now I like the fact that we are a Fordham family.”

It certainly eased the transition to college, he said—“It’s difficult to feel homesick with family so close by.”

“Whenever we are all at home, I’m not the only one who gets to ask how classes are going,” he said.

As for Margo, she studies accounting and attends classes a few nights per week–and, revealed Daniel, is doing very well. She says she follows after her mother, who is still taking classes herself at age 65.

“It must run in the family,” she said.