When John Shea, S.J., arrived at his new office, the first thing to do was get rid of the furniture. 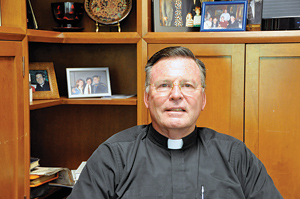 “I said jokingly that this would be a perfect office if I were coming in to open a bank account,” said Father Shea, Fordham Lincoln Center’s new director of campus ministry and chaplain.

So the L-shaped desk and small wooden conference table have been replaced with a couch and two plush chairs. Eastern statues have joined Western theology texts along the bookshelves, and mementos of Father Shea’s time in Asia are displayed on the coffee table.

“This is where students can come in, feel relaxed, talk,” he said.

Father Shea is no stranger to Fordham. Besides earning a bachelor’s degree from Fordham in 1969, he taught in the psychology department, worked as a psychologist in the counseling center, and was rector of Murray-Weigel Hall from 1986 to 1989. From 1989 until 1996, he was associate vice president and then vice president for student affairs.

“There are so many familiar faces that it’s kind of a homecoming in many ways,” he said. “People have been very welcoming on both campuses.”

After leaving Fordham in 1996, Father Shea continued in higher education administration, becoming president of John Carroll University. In 1999, he moved to the University of Scranton and advanced to vice president for mission and ministry.

The last seven years, however, have found him in an entirely different setting. Since 2005 Father Shea has been the director of the East Asia Theological Encounter Program in Chiangmai, Thailand—a post he will continue to hold remotely. There, he instructed Jesuit scholastics on Eastern theology, taught English to Thai students (he speaks Thai fluently), and worked at a retreat house in Chiangmai.

“I’d wanted adventure, change,” he said of his experience in Asia. “I’d been in higher education for 26 years and just felt that I wanted to do something different. When this opportunity arose, I jumped at it.”

At the top of Father Shea’s list these days is to make sure that all Lincoln Center students know what campus ministry has to offer.

“Campus ministry has been associated more with undergraduates, but my intention is to visit with the deans of the graduate schools and let them know, too, that this office is available.”

Another goal is to create a weekly meditation group, offering students a way to decrease stress while learning about a lesser-known practice of Christianity.

“There’s a whole tradition of Christian meditation,” he said. “It’s very much like Zen or Buddhist meditation. You sit quietly and don’t think, and if thoughts come, then you simply bring yourself back to focusing on breathing rather than going where your mind takes you. Over the years, you become much more at peace, and much more aware.”

Although Father Shea’s return to Fordham is, for him, a homecoming, the world traveler says that he is also looking forward to seeing the University from a new perspective at Lincoln Center.

“I love Fordham,” Father Shea said. “And I’m excited about being here at Lincoln Center. It’s a new thing, and a challenge.”