A QR code in a plastic holder sat in a prominent position on their table; visitors who scanned it were directed to an Instagram account for their group.

Their goal? Recruit Fordham students, faculty, and administrators to join First Gen Network, a group formed this semester to support students who are the first in their families to attend college. Since 2017, Nov. 8 has been celebrated as National First Generation Day.

“When I had to choose a college, it was during the pandemic, and it was so difficult because my parents didn’t really know much. It was a daunting process—picking schedules, learning about loans, and things like that,” said Stegmuller, a second-year Fordham College at Lincoln Center student. 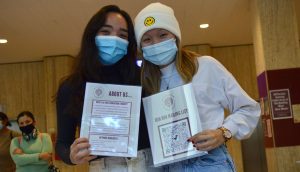 Stegmuller and Chen, a senior at the Gabelli School of Business, said they were attracted to the group, which is planning to hold a panel discussion in the spring because it offered connections to members of the community who they otherwise would never meet. Neither knew each other before joining the group.

Stegmuller said one of the things she’s come to appreciate is how many first-generation students have to overcome an inclination to do everything themselves.

“We’re just so used to doing everything on our own, so it’s good to have a group where we can reach out and learn to ask for help. When people are like ‘Oh, just go to office hours, or ask the dean for help,’ to us, it’s like, ‘No, I can do that myself,’” she said. 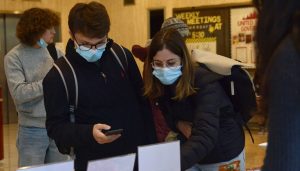 Nicole Varela, a first-year FCLC student, was one of the students who signed up to join the group. Her parents both attended college in El Salvador but never finished. She benefitted from the fact that her older brother went through the process two years before her.

“SATs, ACTs, college essays—I feel like people who know a lot more about that have an advantage, but we talked to people who knew the process, and they helped my brother through it.
“In this group, there are going to be a lot of different people with different experiences, but we all have one thing in common, so that’s nice.”

Students weren’t the only ones the group attracted.

Elizabeth Stone, Ph.D., professor of English, joined because, she said, it’s important to provide a model for what’s possible for students, particularly those who, like her, were both the first to attend college and the first to become a professor.

“I think it’s important for people who may be interested in going into academia to realize there are people who came from the backgrounds that they came from who walked that road, and they can walk it too if they want to.”
First Gen is welcoming members of the Fordham community who are both first-generation students and those who want to support them. For more information, visit here or email firstgen@fordham.edu.