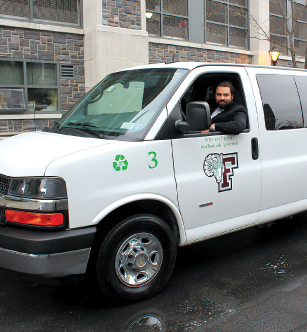 With the arrival of three new vans this past April, more than half of Fordham’s Ram Van fleet is now powered by bio diesel fuel.

Marc Canton, FCRH ’01, GBA ’08, director of intercampus transportation, said the total number of vehicles running on the fuel, which is more efficient and generates less carbon dioxide, now stands at 20: 16 that ferry passengers between the Rose Hill and Lincoln Center campuses, two that are used by Campus Ministry, and two ambulances used by the Fordham EMS.

The 14 remaining gas-powered Ram Vans that are used by the athletics department may be converted in 2014, provided they can all be converted simultaneously.

The transition away from traditional gasoline to bio diesel began in earnest in 2008, when Fordham stepped up to a citywide challenge from Mayor Michael Bloomberg to cut greenhouse emissions by 30 percent by 2030. A pilot vehicle was delivered on Jan. 30, 2010. After a year of testing, more were gradually converted.

As a result of the change, Canton said they’ve doubled the vans’ miles per gallon while reducing the amount of carbon emitted. It hasn’t been an entirely hassle-free transition, though. For starters, it takes an hour to drive from the Rose Hill campus to and from Schildwachter & Son Inc., the closest dealer of bio fuel, whereas gas-powered vans can be filled up right on Fordham Road.

“In the busy times of the year, when athletics are at its peak and are using their entire fleet, it feels like we’re constantly refueling vans, because we can’t get the vans fueled only in the allotted hours that we’re scheduled. It’s just not flexible enough,” he said.

What offsets that inconvenience is the low cost of the fuel.
“When you calculate the expenses of the vehicle with the savings from fuel, we pretty much break even. We do a little bit better with the diesels, just using those factors,” Canton said.

In the end, Canton says it’s worth the effort, because studies show that van pooling is one of the most efficient means of transit available. He’s keeping an eye on compressed natural gas as a future option, and even briefly looked at a retrofitted van with rooftop-mounted solar panels.

“We’re Fordham. We should be pushing. We should be at the forefront,” he said. “We should be leading the way, not waiting for somebody else to find the answer and jumping on that.