skip to main content
Return to Fordham University
You are at:Home»Campus Life»Fordham Welcomes the Class of 2018

As globalization makes the world seem smaller, the newest batch of undergraduates at Fordham proves the University’s international pull is growing stronger.

Fordham welcomed 2,246 students to the Class of 2018, with 1,678 of those students at Rose Hill and 568 at Lincoln Center—a 15 percent increase compared to last year’s freshmen class. The University made just over 19,000 offers to nearly 41,000 high school applicants, an acceptance rate of 48 percent.

The freshman class has a mean score of 1260 on the SAT and ACT and a mean high school GPA of 3.6. Additionally, 192 students enrolled as presidential, dean’s, and merit scholars. Overall, 91 percent of the Class of 2018 was offered some sort of financial aid.

Perhaps the most distinctive feature of the Class of 2018 is its diversity, said John Buckley, associate vice president for undergraduate enrollment.

The new class hails from 43 U.S. states and the District of Columbia. “We have over 50 students from the southwest region of the United States, and we have more than 140 from the west—including more than 120 from California alone,” Buckley said.

In addition to being more ethnically diverse, this year’s freshman class includes 171 international students from countries as far as Ghana and Myanmar. Of that population—which saw a 26 percent increase since last year—111 students come from abroad, while more than 60 are international students who attended high school in the United States.

“To have students from diverse backgrounds engaging with one another in conversation, debating ideas, and having both academic and social experiences together — that is essential for a quality educational experience and for a strong community,” Buckley said. “And when you consider the city in which we’re located, which is truly global, it’s important for the Jesuit University of New York City to reflect that environment.” 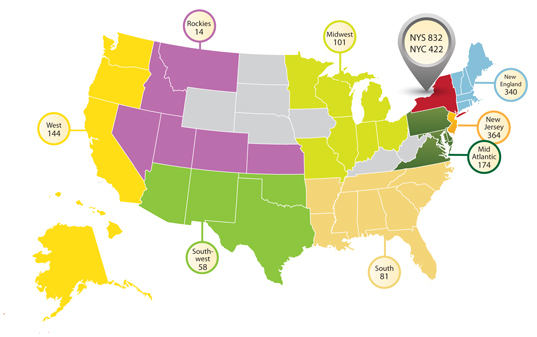 The new class hails from 43 U.S. states and the District of Columbia, with over
50 students from the southwest region and more than 140 from the west.

Sanghyun Lim, a Columbia, South Carolina resident who hails originally from Seoul, South Korea, is one of those 60 international students. While his two roommates unpacked their belongings in their new home on the 15th floor of Lincoln Center’s McKeon Hall on Sunday, Lim raved about the space, with its view of the Hudson River and Midtown Manhattan to the south. Like his fellow international students, he moved in before his fellow classmates, to allow for more time for adjustment.

A student at Fordham College Lincoln Center, he plans to major in communications and media with a concentration in film, and hopefully become a film producer or distributor.

“I came here once in seventh grade with my brother, and both of us said, ‘This is a great place; we should come here when we grow up,’” he said.