skip to main content
Return to Fordham University
You are at:Home»Campus Life»Fordham Vet Programs Open a Door to Civilian Life

SERV, New at the Law School 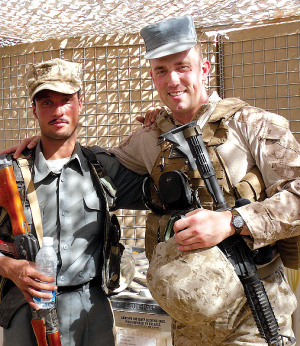 Davis (right) with an Afghan National Police Officer during a Security Shura (consultation) at the 2010 Battle of Marjeh.

Caleb Davis, a second-year student at the Fordham School of Law, likes to joke that you don’t bring veterans into your organization and expect them to be wallflowers.

And indeed, the members of Students for the Education and Rehabilitation of Veterans (SERV), a student group that he started in July, have hit the ground running.

Although it’s less than a year old, the group has 15 members who are veterans, and another 20 who are just interested in issues that veterans face in the legal realm.

Davis knows these issues well, as he is a retired Marine Corps captain. He flew helicopters for eight years before retiring on temporary disability. He knew he wanted to study law in New York City, and says that Fordham was hands-down the most veteran-friendly university in the area.

Working with a friend at New York University, Davis established SERV both there and at Fordham, to help veterans enrolled at the schools adjust to academic and civilian life.

“It’s a bit surreal, going from the military into the abstract world of law school. There are some skills that kind of go stale while you’re in the military, like typing. I had people do that for me, so after the first two or three years, I didn’t do much typing at all,” he said. “[At college], it’s a three-hour marathon of typing, so you have to learn how to put your thoughts down and organize them.”

Additionally, the group has taken on with gusto the role of assisting veterans of all stripes deal with administrative issues, including discharge upgrade cases. A veteran discharged with a less-than-honorable designation can lose pension benefits. Davis notes, however, that many veterans given such a designation suffer from traumatic brain injuries or suffer from post-traumatic stress disorder and not enough has been done for them. Both of those afflictions can change a soldier’s personality, affect behavior, and lead to a non-pensionable discharge.

Veterans are well positioned to take care of these issues, says Davis, because they understand the discharge procedures.

“They can see where the procedural flaws were, and also where the substantive flaws were in the case. It actually puts them in a better position to judge than a New York attorney, because they’re so familiar with military law, and they’ve had a bit of legal training there,” he said.

“When you combine those two, it makes a potent offense for upgrading these discharge decisions.”

Veterans also thrive at Fordham, he noted, because whereas students bring a healthy dose of idealism to their studies, veterans bring pragmatism to the table.

“In the end, it is a beneficial relationship that tempers both extremes. Hopefully, it results in producing more well-rounded barristers,” he said.