skip to main content
Return to Fordham University
You are at:Home»Campus Life»Fordham Expands Study Abroad Opportunities in Spain and Around the World
Fordham students studying abroad in Spain. Courtesy of Fordham’s Office of Study Abroad
When Emilia Tesoriero was thinking about studying abroad, Granada, Spain, was near the top of her list. Tesoriero, a junior at Fordham College at Rose Hill majoring in international political economy, was intrigued by the possibility of studying in a Spanish-speaking country after taking Spanish classes throughout high school and college.

“The goal was actually to start using Spanish and nail it down—I learned it, but I never had the chance to use it and get better, so that was a major thing,” she said. “And then also, Granada, was the kind of place that I was looking for, with all the history and a very different culture.”

Tesoriero, who just completed her fall semester in the program, chose to also participate in a homestay in Granada, where she lived with a Spanish family and “really immersed myself in a different culture.” 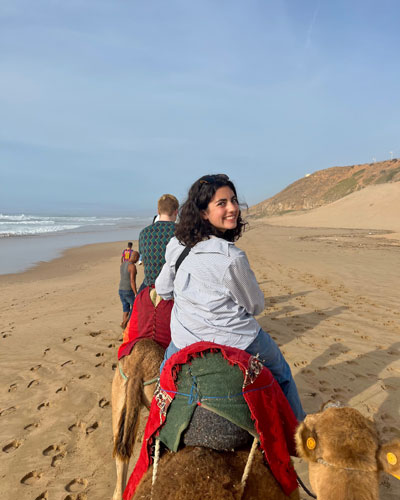 Tesoriero is part of a growing number of students who are choosing to participate in the Granada program, which is expecting its largest ever cohort of students, at least 44, in spring 2023, according to Joseph Rienti, director of the Office of Study Abroad.

But it’s not just the Granada program that’s seeing a growing interest from students, Rienti said. New changes in how study abroad is paid for are helping students access even more programs in different locations. And study abroad participation is returning to pre-COVID-19 numbers, according to Rienti, with about half of the undergraduate population choosing to study in one of 100+ programs across six continents.

“It’s a very significant development for Fordham that we can now offer 100+ programs for fall or spring semester at Fordham tuition,” he said. “[Students] can now use Fordham funding for the programs, so the vast majority can fully apply their financial aid packages.”

Previously only about 25 programs were able to accept Fordham tuition rates and financial aid packages, Rienti said. He said the expansion helps offer a “more equitable approach to study abroad.”

“It’s really refreshing to be able to have a conversation with a student and have the whole world being open to them,” he said.

Fordham in Granada is one of two Fordham-run study abroad programs, the other being Fordham London. Granada differs from the London program in that students are not at a Fordham campus. Rather, they take courses through the University of Granada and through a new partner, Cultural Experiences Abroad (CEA). However, the University still has more input than a traditional study abroad exchange program, Rienti said. For example, departments such as the history department, are working closely with their partners in Granada to develop “very Fordham-specific type courses” that the students can take while abroad.

The Granada program was recently restructured and enhanced, thanks to Fordham’s new partnership with the Cultural Experiences Abroad organization, which runs study abroad programs across the world. The University began working with CEA during the COVID-19 pandemic to provide virtual options from across the world to students, and the new partnership in Granada allows them to add even more offerings for Fordham students, both in and out of the classroom, he said.

“Through that collaboration, we can now offer the opportunity to do more internships in many more fields,” he said. “We’ve expanded housing options—students used to all have to live in homestays, but we’ve now expanded to include student residences, so students are living with international and Spanish students in Granada. And we’ve expanded the course options.”

Finley Peay, Fordham’s assistant director for London and Granada programs, said that many of the additional offerings have been in the STEM fields, particularly public health, as well as additional historical and cultural options.

“There is a public health and ecology course, as well as some culturally-oriented courses, so thinking about the history of Spain and the history of art in Spain, as well as key types of dance and music that are important for Spanish culture,” she said.

Tesoriero’s favorite course was a media studies and current events class, which she said she’s recommending to her classmates studying in Granada next semester.

“Everything we learned about in the class—from how the family is structured and family works in Spain to the political system—everything that we’ve learned in class I’ve been able to see out on the streets, which is really cool,” she said. “We had a whole unit talking about holidays in Spain and the different Christmas traditions, so it’s cool getting to see that now.”

The collaboration with CEA also expands the out-of-the-classroom experiences for students, such as weekend trips to Morocco or other parts of Spain.

“There’s a wide variety of cultural experiences and benefits, not only Granada, but Seville and visits to less-known, compelling places” Peay said. “We find students are very excited by that.”

Tesoriero said she thought “all of the trips that CEA put on were fantastic.”

“I think my favorite was Morocco, because it was so different. I had never been anywhere like that before.”

She also said that while student housing was now available to Fordham students, she’s glad she chose to live with a family.

“In Granada, my favorite thing is to sit in the plaza near my homestay and just watch people,” she said. “Living with my host family, I feel really lucky. I really wanted that immersive experience and I definitely have that local connection.” 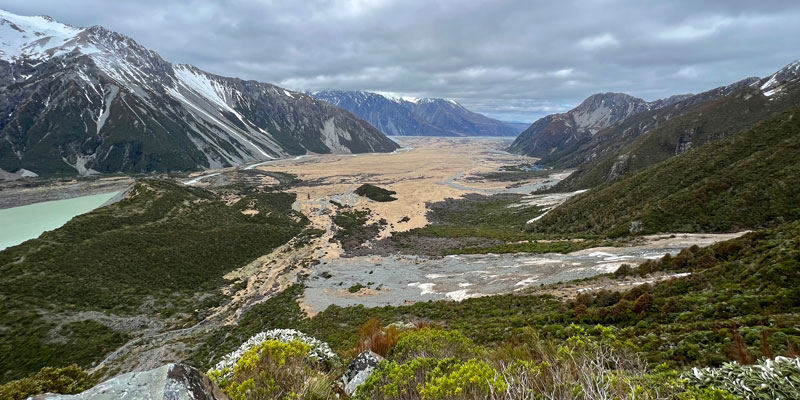 Grace Dailey, a senior at Fordham College at Rose Hill, captured photos like this one while studying abroad in New Zealand.

In addition to the growth of the Granada program, Rienti and Peay said that they’ve begun to see students looking for opportunities outside of the historically popular programs in Western Europe and parts of Asia.

Grace Dailey, a senior at Fordham College at Rose Hill majoring in environmental studies and communications, was one of those students; she spent the fall semester in New Zealand, which she said has fascinated her.

“It’s just such a naturally beautiful place and I’m an outdoorsy type of person, and they really have it all,” she said. “I thought, ‘what a good place to explore.’”

Dailey said that while she took mostly communications courses in New Zealand, such as photography and advertising, her favorite course was a sustainability course. 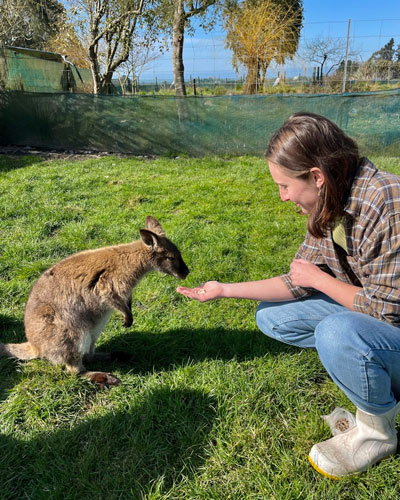 “I loved taking that while I was abroad, and it was such an exciting and very hands-on type [of course],” she said, adding that the professor was also an “outdoorsy person” who helped connect what they were learning to the natural environment.

Rienti said that he’s excited for the study abroad office to shift from the “emergency response” of the pandemic years into continuing to rebuild and grow the offerings for students.

One of the ways they’re encouraging more students to study abroad is shifting the application cycle, so students interested in studying abroad in fall 2023 or spring 2024 have to apply by March 1. This allows Rienti and his team to avoid turning students away because a program was full. For example, if the spring program has too many students, a student can then be shifted to the fall. He said that he hopes this change, combined with the financial aid shift and the expansion of offerings, will help more students study abroad.

“I encourage students to think about study abroad as a bridge to something,” he said. “What can this be a bridge to—internships, work abroad, scholarships—what could this lead to beyond being an end in itself?”