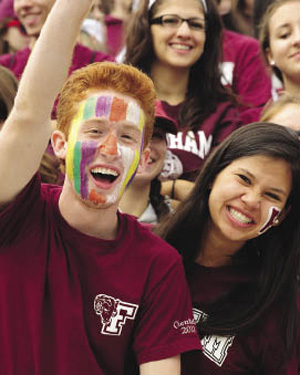 As Al Gaccino (GSB ’62) sat under the tent on Edwards Parade at Homecoming 2011, he took note of how Rose Hill has changed since his days as a student.

“When I came here, it was a commuter school,” he said. “Students would go to classes and then leave. Now it’s like one big family having a good time together. It’s great.”

Gaccino was among roughly 4,000 members of the Fordham family who cheered the Rams as they battled the Columbia Lions on Sept. 17.

Lawrence Fitzsimmons (FCRH ’58), who attended the event with his son and two grandsons, reminisced about “walking jug,” an unusual form of punishment once meted out to students at Fordham Prep, which he also attended. 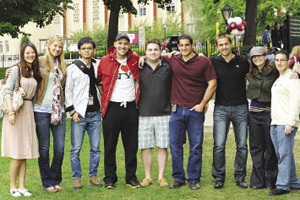 carrying it all,” Fitzsimmons said.

“You never forget those all-nighters,” said Ed Coleman (FCRH ’71), who majored in chemistry. His son, Brian Coleman (FCRH ’10), said that his family has attended Homecoming for many years.

“This is definitely a Fordham family,” he said with pride. 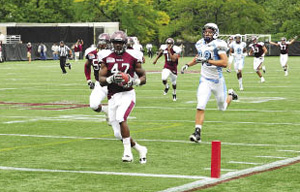 Scenes from Homecoming 2011: Students cheer for Fordham; a Ram runs for a touchdown; old friends reunite.
Photos by Chris Taggart

As alumni and students mingled before kickoff, children enjoyed the Little Ram Fun Park, where an inflatable rock climbing tower and two bounce houses provided fun throughout the day.

Among those who came to cheer and reminisce was Andy Lukac (FCRH ’51), who was named MVP of the football team in 1949 and was inducted into the Fordham Athletics Hall of Fame in 1992. Lukac recalled meeting Frank “Bull” McCaffrey, a Fordham football legend, after a game against Army in 1949.

“He tapped me on the shoulder and told me I played a good game,” Lukac said. “To get that compliment from Fordham’s first-ever All-America made me feel good.”

Charles Thomas, a friend of Lukac, also was on hand to support the Rams.

“I’ve found it a great pleasure to come back here year after year with Andy,” he said. “I feel like I’ve gone to Fordham because the school has such a fantastic family feel.”

A proud Ram, Quinif said she has been a devoted follower of Fordham football since her student days, adding, “Whenever we win, I’m happy.”

And there was certainly plenty of happy to go around at Homecoming 2011.

Fordham fans cheered, stomped and clapped through the contest as the Rams notched a 21-14 victory.

A contingent of New York’s Bravest stood atop fire trucks to catch the game. The crowd on the bleachers at Jack Coffey Field rose to their feet when the Rams scored a second touchdown to take a 14-7 lead. Scores of dedicated fans showed their enthusiasm by standing from the first kick to the final whistle.

Sophie Stanish, a senior in Fordham College at Lincoln Center who sang the national anthem before the game, said that the crowd’s full-throated support inspired her.

“Singing in front of all that Fordham pride was a fantastic feeling,” she said. “Being right there in the middle of Homecoming made me proud to be a part of that Fordham spirit.”