skip to main content
Return to Fordham University
You are at:Home»Campus Life»Class of 2015 Takes Fordham by Storm

What does it take to get to Fordham?

Good grades in high school and a mountain of extra-curricular activities,
to be sure.

For the Class of 2015, it took something more: enough savvy, luck and determination to outlast Hurricane Irene, the worst severe-weather system to tear through the Northeast in a century.

The storm postponed Opening Weekend for 24 hours, so when freshmen and their families began moving in to Rose Hill and Lincoln Center residences on Aug. 29, many had stories to tell.

Surveying the Martyrs’ Court room where her son, Christopher, will spend the year, Laura Sanders declared it a step up from their home in Northport, N.Y.

“Well, it has electricity, which we didn’t have when we left,” she quipped. 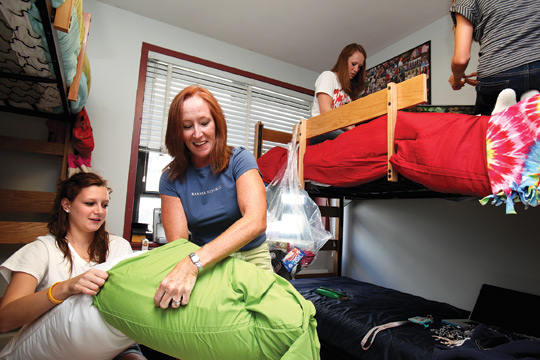 Incoming freshman Meagan Kelley (left) gets some help with a pillowcase from Shannon Ostiguy, whose daughter, Shawna (top), will be Kelley’s roommate.
Photo by Bruce Gilbert

Blaire Eberhart, who is pursuing a bachelor of fine arts in dance through the Ailey/Fordham partnership, tried to dodge the storm by arriving in New York on Friday.

“It was a good idea to postpone move-in day,” said the Atlanta native. “My hotel was so flooded that I couldn’t have left even if I wanted to.”

Whatever torment was dealt to the area, the day after the storm was, by all accounts, picture perfect. Azure skies and temperatures in the mid-70s temporarily erased the memories of blackouts, flooded basements and downed trees back home.

“The hurricane was a challenge, but so far everything has been going smoothly,” said student orientation leader Louis Sullivan. “It’s important for us to keep up our energy and make students feel welcome, because their first impression of Fordham sets the tone for their whole time here.” 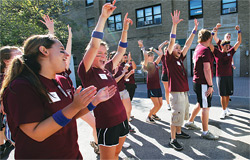 The move-in program, which opens three days of new student orientation, is run by the University’s Office of Student Life and Community Development.

Though freshmen typically pull up to their respective residence halls as early as 7:30 a.m., this year the traffic was light until almost noon. New arrivals were set upon by throngs of cheering and dancing orientation leaders who quickly transferred the students’ belongings to their rooms.

“They didn’t do that at the University of Arizona or at NYU when my sisters went to school,” said Peter Gyben, a student in the Gabelli School of Business who hails from Orange County, Calif.

The ritual shouting of new students’ names that accompanies the move-in process is one of the hallmarks of Opening Weekend at Fordham.

“I have been so impressed; it’s so organized,” said Jeanine Bonaventure, whose daughter is in the theatre program at Lincoln Center.
“Fordham cares about the students, they care about the families and they care about education,” she said. “After my daughter had her interview in January, she told me she had to go to school here.”

The Class of 2015’s mean standardized test score of 1253 continues the trend of higher-testing students choosing Fordham, while 78 percent ranked in the top quarter of their high school class.

The incoming freshmen include 114 international students—more than double the number from last year, with the greatest increase coming in students from China.

Additionally, the class features 201 students who were Presidential Scholars, Dean’s Scholars and Semifinalist Scholars while in high school—an increase of 48 percent over the previous year’s total.

More than 90 percent of admitted students were offered financial assistance or scholarship funds.

“I love Fordham; everyone is so nice—genuinely nice,” said Sajia Hanif, an incoming student from Long Island who wants to pursue peace and justice studies as well as music education. “It’s a perfect fit for me.”