skip to main content
Return to Fordham University
You are at:Home»Campus Life»Business Students Get Test Drive in Sustainability 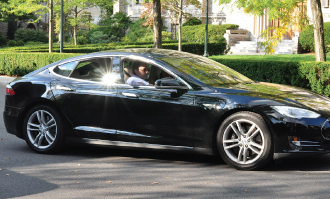 Tesla, an electric-powered car, made its Rose Hill premiere on Oct. 1.
Photo by Patrick Verel

An exotic black car was spotted doing laps around the Rose Hill campus on Oct. 1, but it wasn’t a cause for concern.

The sleek black sedan seen quietly ferrying Fordham juniors and seniors to and from Hughes Hall was a Tesla S60kw, an electric car that travels 300 miles on a single charge.

The visit was part of Sustainable Business Foundations, a class taught by Michael Pirson, Ph.D., assistant professor of management systems at the Gabelli School of Business.

Whereas past company representatives have addressed students from the confines of the classroom, the Oct. 1 class was a little more hands-on. As Steve Treacy, a senior at Gabelli who works as a product specialist for the 10-year-old San Carlos, Calif.-based car company, gave students rides around campus, other students peppered Tesla representative Jeff Cuje with questions about the company.

Cuje explained how the S60kw, which has a base price of $70,000, can be charged overnight at any home with a 240-volt connector, at a public charging station, or at one of the company’s “Supercharger” stations opening around the country.

And even though many homes still get their energy via coal-fired plants, Cuje said that, in the long run, it’s still cleaner than cars with traditional internal combustion engines powered by petroleum products.

In addition to Tesla, Pirson has hosted representatives from companies such as Whole Foods, Eileen Fisher, and Green Soul Shoes. Tesla embodies the challenges that sustainable businesses face when tackling issues of transportation and energy, and their advertising model is an example of how many sustainable businesses follow unique paths. 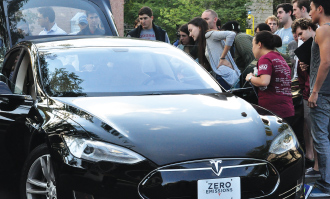 “They’re doing it all word-of-mouth, which is a great strategy because it doesn’t cost as much,” he said.

John McConnell, a senior at Gabelli majoring in finance entrepreneurship, counted himself as a fan.

“The idea of finding a car that runs on a sustainable energy source is not going away, so Tesla is really at the forefront. A lot of other companies have electric models, but that is not their core competency. Tesla’s core competency, as far as what they’re making, is electric cars,” he said.

After graduation, McConnell hopes to work for a company that is focused on solving the problems of today with the future in mind. General Electric’s “Ecomagination” program, for example, examines companies’ products to see how they might be replaced with something more sustainable.

“Some of them aren’t textbook-sustainable products,” he said. “Fluorescent light bulbs, for instance, aren’t really good for the environment; they just use less energy. But I want to be part of a company that’s looking to solve those issues,” he said.