skip to main content
Return to Fordham University
You are at:Home»Campus Life»Bucking the Multitasking Trend, One Breath at a Time 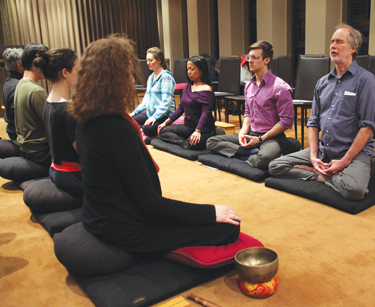 In the age of smart phones, social media, and 24/7 connectedness, the 21st-century mind has become the master of multitasking.

But every Tuesday night, a group at Fordham bucks the trend, gathering to find one thing that the information age lacks: quiet.

For nearly a decade, Ross, along with Patrick Hynes, former associate professor of information systems, has led the Campus Ministry-sponsored Interfaith Zen Sitting Group. Each week, about a dozen students, faculty, and staff gather in the Lowenstein Center’s Blessed Rupert Mayer, S.J., Chapel to practice Zen meditation. Another group meets Mondays at the Westchester campus.

“Interfaith Zen provides a place for people of different faiths, or no faith, to engage in contemplation without anyone trying to name what they may be contemplating,” Ross said, emphasizing that the group’s location in the chapel is meant to ensure a quiet atmosphere, not set a religious tone. “Naming always involves reducing, or attempting to know and control. Zen is recognizing that we don’t know.”

At promptly 6:15 p.m., Ross rings the opening bell, then leads the group in three 25-minute silent sitting periods, with five minutes of walking meditation between each period. Seated on cushions, which are arranged in two rows facing one another, the participants breathe and attempt to quiet their minds.

“Most people think that meditation means trying to reach nirvana, which is thought of as somewhere else that essentially does not exist. But Zen is completely the opposite of that. It’s returning to the present moment, completely in your body, completely in this world,” Ross said. “It’s about becoming yourself. That’s very Jesuit, and totally Zen.”

The group bases its practice on the teachings of Robert Jinsen Kennedy, S.J., a Zen Roshi, or master, who teaches theology and runs Morning Star Zendo at St. Peter’s University in Jersey City, N.J. Although Zen is a school of Buddhism, Zen students and teachers in Father Kennedy’s tradition—the White Plum lineage—can belong to any faith tradition, or to none at all.

“Zen isn’t about theology. It’s a practice,” said Noel Ann Brennan, adjunct professor of law and sitting group participant. “We all have busy lives and even when we stop, our minds keep going… Zen offers a way to discipline the mind through concentration. You count your breaths, and if you find you’re following the trail of the mind again, you come back to the breath, never judging what you’re thinking or that you’re thinking, but always bringing it back to the breath.”

Marguerite Frarey, a sophomore performance major at Fordham College at Lincoln Center, said that her participation in the sitting group has been helpful in relieving, and even preventing, the stress of attending classes coupled with a grueling rehearsal schedule. It is also a useful tool for theater, she said.

“For an actress, your main instrument is your body and mind, so being able to put yourself into a clear headspace allows you to be more open to taking on different characters and roles,” she said.

On the face of it, sitting quietly might seem simple. But Zen practitioners know that meditation can be arduous. For one thing, it can be physically uncomfortable to sit for long periods of time.

“Zen is difficult,” said Carol Gibney, associate director for campus ministry at Lincoln Center and director of Ignatian Programs. “But it’s like going to the gym—the more you do it, the more you recognize its necessity, and the more benefits you get out of the practice.”

One of these benefits, she said, comes from gathering people of various ages, professions, and faith traditions together in a shared space to work toward the same goal.

“Interreligious dialogue [also]occurs in silence,” she said. “Any sort of understanding of compassion and love, which is both a byproduct and goal of meditation, helps one to become a better Christian, a better Jew, a better Muslim.”

In addition to experiencing physical discomfort, practitioners may become aware of previously unknown thoughts and feelings.

“These thoughts come up like an alien invasion for a while, but they’re all going on in your head on a daily basis anyway,” Ross said. “Nothing new is happening—it’s just that you can hear them because you’re silent, with absolutely no distractions—except, perhaps, the pain in your legs.”