skip to main content
Return to Fordham University
You are at:Home»Campus Life»Breaking Through: A Look at First Generation Students

(Fordham News profiled three incoming freshmen breaking new ground as the first in their families to go to college.)

Tim Cung: In pursuit of the American Dream

In his early teens, Tim Cung saw the movie Wall Street, and began watching films focused on the financial industry.

“The movies I saw had a lot of financial jargon, and I started to research the [terminology],” said Cung, a freshman at the Gabelli School of Business who grew up as an only child of immigrant parents.

His curiosity hit a peak when his high school, Brooklyn Tech, began offering finance as a pre-college major. He took courses in accounting, finance, and enrolled in AP economics—which was, coincidentally, taught by an instructor who once worked on Wall Street.

“Before I took AP economics, I thought [economics]was all about money,” he said. “But it’s actually about resources, and how to allocate them effectively.”

Now, Cung is the first person in his family to attend college, where he plans to study finance.

Cung said his father was born in Vietnam after his grandparents fled China when the communists came into power in the late 1940s. His mother, also of Chinese heritage, was born in Malaysia after her family fled from their homeland. Neither of his parents graduated from high school.

“It’s exciting to be attending college, because I’m venturing into uncharted territories,” he said.

Cung, who grew up on the Lower East Side of Manhattan, said his family “always seemed to be going from place to place to achieve a better life.” Since his parents didn’t understand the American education system, Cung said, he learned how to be self-reliant and independent—as early as elementary school.

“Ever since I started school, my parents said, ‘We’re sorry, we couldn’t provide any aid for you in terms of your education. We can’t help you get awards or fill out paperwork. We’re sorry about that. You’re going to have to learn to take care of those matters by yourself.’”

As Cung enters his first year at Fordham, which he said was made possible through a scholarship and a generous aid package from the University, he is determined to accomplish his goals.

“Being a first generation student means that I’m in pursuit of the American dream,” he said.

“It’s all about providing a better future for our families and for ourselves.”

Samantha Chavez-Rodriguez: Setting a path for the future

For Samantha Chavez-Rodriguez, an aspiring civil rights lawyer, the inspiration to study English at Fordham College at Lincoln Center came from a surprising place.

Chavez-Rodriguez, who “loves to read and write essays,” recalled a memorable day in her AP English language and composition course at Notre Dame High School in Salinas, California. Her teacher read a poem about nature and suddenly became emotional while reading it to the class.

“I’ve never met a teacher so passionate about teaching,” said Chavez-Rodriguez. “That stuck to me. I hope that I can have a job that I love so much that it brings me to tears.” 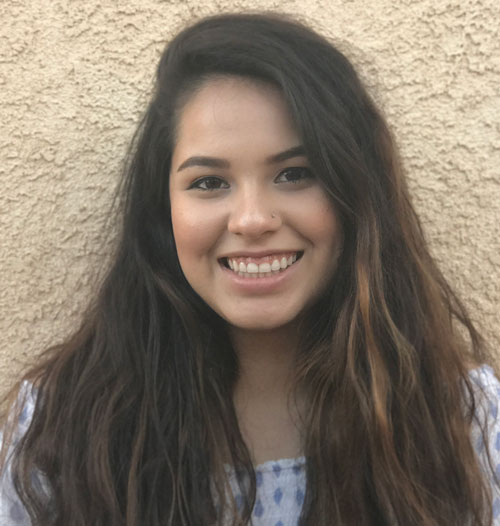 In the same class, Chavez-Rodriguez penned an essay on gender pay gaps; writing it inspired her interest in gender, race, and discrimination.

“I don’t think it’s fair that simply because someone is a woman or from a certain race, they are paid less,” she said. “That’s what mainly pushed me.”

When Chavez-Rodriguez wasn’t studying to get good marks in school, she was participating in countless student activities, from the student council to talent shows.

“I thought that if I got involved in various student activities, it would count for college” she said.

“I’m thankful that my parents went through as much as they did to get me to the point I’m at, but I also feel this obligation to them because my mom didn’t finish college.”

Chavez-Rodriguez said her work ethic was also driven by childhood memories of growing up in East Los Angeles, where her community was inundated with gangs, drugs, and poverty.

“I grew up seeing all of this. People didn’t expect much from my community, so it just motivated me that much more. Not only [did I want]to prove people wrong, but also to show that while the community you’re born in can affect you, if you have the will and a positive attitude about what you can achieve, you can accomplish it,” said Chavez-Rodriguez.

“Where you’re born and the circumstances that you’re born into doesn’t set the path for your future.”

When Caitlin Woods arrived at the Lincoln Center campus with her parents after a four-hour drive from Lothian, a rural suburb in eastern Maryland, she wasn’t sure what to expect. She said only one other of her high school friends had left the region to go to college.

Neither of her parents had been able to go to college, so when the three of them stepped out onto 61st Street, the cheering students and hotel-like dorm took them by surprise. 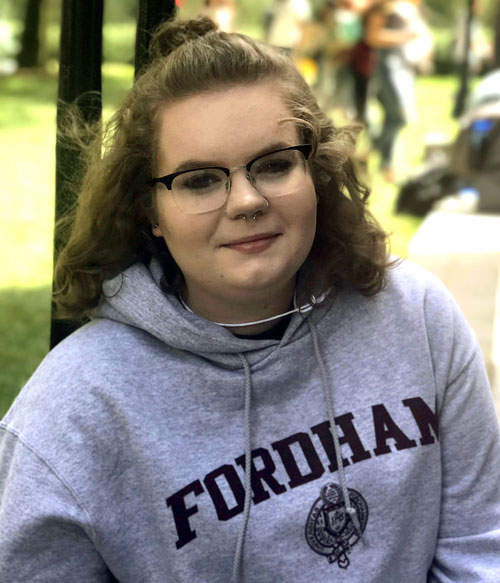 “I think it was very strange for my parents to see move-in day, because none of us had ever experienced anything like that before,” she said. “That was an affirming moment, where I thought, ‘I really am an adult.’”

Woods comes from a “traditional Irish Catholic family” where, she says, the men are prone to joking around, but are not too forthcoming with their feelings. So it took her by surprise when she heard about her father’s response when her mother asked how he would feel if Caitlin went to college in New York City.

“He told my mom, ‘You know I’m nervous about her safety in New York, but what I feel mostly is pride,’ and I was like, ‘Wow!’”

She said that her two brothers and most of her friends are happy to avoid the city. But as a kid, she relished trips to Baltimore and Washington, D.C.

“Those trips were the most life-changing experiences for me, seeing somewhere where there was so much activity going on,” she said. “So for me, looking at colleges was a way for me to find a city.”

Yet, Woods, who is studying communications at Fordham, said she’ll always honor her rural roots.

“I’d like to bring some of their humbleness with me here.”

-Tom Stoelker contributed to this article.