skip to main content
Return to Fordham University
You are at:Home»Campus Life»Biology Labs Get Upgrade 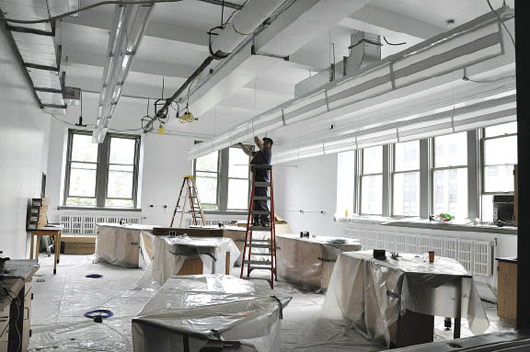 Freeman labs received a facelift this summer (pictured here on Aug. 14), as Fordham moves to upgrade its science facilities.
Photo by Patrick Verel

The crawfish and hermit crabs that call the Freeman Hall biology lab home had lots of company this summer.

Workers gutted older facilities on the east side of the third floor, and replaced them with state-of-the-art new ones. The construction, which was scheduled for completion in time for the start of the fall semester, encompasses six teaching laboratories, several prep laboratories, offices and storage spaces, the main corridor, and the stairwells.

Donna Heald, Ph.D., associate dean for science education, said the construction is part of a $10 million project aimed at upgrading all science facilities at Fordham over the next five years. It follows a similar, recently completed project in the chemistry labs.

“Science and technology are rapidly developing areas.  To provide the best education to our students, we must provide opportunities to gain hands-on laboratory experience in modern facilities, with modern instrumentation,” she said.

The layout of the new space offers a central area set aside for preparation and instrument storage. This will make it easier to use the main labs for different subjects, as they won’t be dedicated to one particular science. Interior windows have also been added, to allow viewing between labs.

“The great thing about interior windows in a science lab is that they allow all to see and be inspired by the lab activity.  You may not be in the same physical perimeter, but it’s exciting because you see that there’s scientific exploration occurring in that space,” Heald said.

“So it’s helpful for the instructor, but it’s also very motivational for the student.”

In addition to biology, the computer science department is undergoing some physical changes, as space in John Mulcahy Hall is being expanded to accommodate research projects in robotics and cell phones. The push to renovate all the science facilities is especially important given that the number of incoming freshmen who intend to major in math, science or the pre-health program is expected to top last year’s total of 300.

“Enrollment has been steadily increasing, so that’s a reason why I think it’s critically important that we’re moving forward on these renovations on multiple fronts,” Heald said.