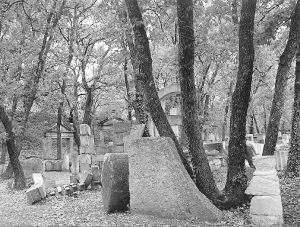 Apt, France 2012, a photograph by Ildiko Butler, appears in the opening exhibit of the renamed gallery.

From a photo essay on Avery Cardinal Dulles, S.J., to an FBI collection of confiscated art forgeries, the Center Gallery has exhibited the gamut of artwork since its opening in 2001. But this season, the most anticipated exhibit will be the gallery itself.

On Sept. 23, the Center Gallery in the Leon Lowenstein Academic Building will officially be renamed the Ildiko Butler Gallery at a special opening and dedication ceremony. The appellation will honor the gallery’s new benefactress, Ildiko Butler, FCLC ’85, who, with her husband Gilbert Butler, made a $500,000 gift to the Visual Arts Department to enhance and sustain the gallery at Fordham College at Lincoln Center (FCLC) and provide student grants.

“The generous gift from the Butler family enables the gallery to operate at an increased level of professionalism with a boost in both the quality and scope of what we do,” said Stephan Apicella-Hitchcock, artist-in-residence and gallery director. “Expect wonderful things in our near future.”

In addition to helping to fund art exhibitions in the gallery, the Butler’s gift establishes a unique opportunity for visual arts students, the Ildiko Butler International Travel Award for Excellence in Visual Arts. Each year, three undergraduates in the Visual Arts program will be selected by the faculty to receive a travel stipend to undertake independent artistic work during the summer or winter academic breaks.

The grants will be given based on a recipient’s academic record, portfolio, and character, as well as a proposal for artistic work in another country. Preference will be given to candidates who plan to work in photography—Butler’s own medium of choice.

“I think travel is very important in developing interests and broadening a person,” Butler said. “It’s important for an artist because you can work in a different way when you’re away from home. You can observe things differently, with a new eye.”

Hungarian by birth, Butler immigrated to New York with her family in 1957, following the outbreak of a revolution in their homeland in 1956. She said that after the family settled in the city, scholarship money made it possible for her and her sister to begin their educations.
“Scholarships are important for people who can’t afford education,” she said. “It helps them to start a life.”

She began at Fordham as a history major and soon found in the visual arts program a place to nurture her love for photography—albeit under rather different conditions than Fordham students enjoy today.

“When Ildiko attended the program, the art department was on the 11th floor [of Lowenstein]and was about three rooms—one of which was basically an oversized closet,” said Butler’s former teacher, Joseph Lawton, associate professor and director of the visual arts program. “There was no gallery space per se. The only space we had was made of portable exhibition materials, and was set up where the faculty dining room now is.”

Butler attended school part-time over several years; she got married while a part-time student and began traveling widely with her husband.

“As a student she was very focused, driven, precise, and worldly,” Lawton said of Butler. “She knew so much about the world, having traveled. And her own photographs reflect that—they’re very precise, they pay tribute to the medium itself, and [they are a tribute]to some of the names that precede her.

“She was the dream student—she challenged you, and she was enthusiastic about the medium—from its history, to its contemporary practice, to making her own images.”

Along with ensuring a space for students to observe professional artworks as well as exhibit their own work, Butler’s gift to the gallery and the eponymous scholarship will help current Fordham students reap the benefits of their art educations.

“The grant money buys students something precious—time,” Lawton said. “It gives them the chance to step away from their academic routine, gain exposure to a different culture, and develop their artwork.”