skip to main content
Return to Fordham University
You are at:Home»Campus Life»A Supportive, Inclusive Environment for Individuals With Special Needs

After attending the Special Olympics World Games in 2014, an international sporting event for athletes with intellectual disabilities, Fordham University senior Erin Biggins saw firsthand the joy that sports can bring to these children and adults, who are often excluded from traditional social and recreational activities.

A year later, Biggins co-founded the Special Olympics Club at Fordham to help create welcoming and supportive environments for adults and children with disabilities.

“The goal of our organization is to raise awareness of Special Olympics and the special needs community, and to find ways to bring Fordham students and Special Olympic athletes [in New York]together,” said Biggins, who currently serves as the club’s president. “Our third goal is to form a beautiful community on campus that embraces inclusion, acceptance, and welcomes all people.”

On April 8, more than 30 Fordham students and Special Olympics Club members joined Camp Acorn, an Allendale-based nonprofit serving individuals with special needs, on a day trip to the Bronx Zoo. Each club member helped the campers to navigate the different exhibitions at the zoo.

“It was really amazing,” said Fordham College at Rose Hill sophomore Jeannine Ederer, vice president and coordinator of the Special Olympics Club. “They told us that they had never gone through as much of the zoo as they did with us, so that was a big accomplishment on both ends.”

Ederer said Fordham students were able to bond with individuals from the special needs community through the event.

“You don’t always have the opportunity to connect with people with disabilities on a personal level and understand what they’re capable of,” she said. “Being paired one-on-one with the campers for an entire day allowed us to learn so many things about them.”

To promote its mission, the club hosted several events on campus during their Spirit Week, which ran from February 26 through March 3. That week the club held its Second Annual Red Out Fashion Show, which gave Fordham students and Special Olympians an opportunity to hit the catwalk together. 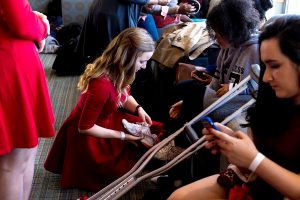 Sami Muller, FCRH ’20, a special events coordinator on the Special Olympics executive board at Fordham, helps a Special Olympian get ready for the club’s Red Out Fashion Show on Feb. 26, 2017 at the Rose Hill campus. Photo by Jessica Mingrino

According to Gabelli School sophomore Morgan Menzzasalma, the club’s treasurer, Special Olympics athletes are often left out of many traditional extracurricular activities that are offered at schools. The club’s fashion show was an opportunity to have an event focused solely on them, she said.

“It was great to see the smiles on the children’s faces during the show,” said Menzzasalma, a track and field athlete at Fordham. “At first they started out timid, but by the end of the show, we couldn’t get them off the stage!”

The fashion show featured a live performance from American Idol contestant Brielle Von Hugel, and several raffle donations. The items included customized Fordham keepsakes from Tiffany’s, which were provided by the Office of the President; an autographed baseball from the Boston Red Sox’s Xander Bogaerts; an autographed hockey puck from the New York Rangers’ J.T. Miller; and VIP tickets for The Tonight Show Starring Jimmy Fallon and LIVE with Kelly. According to Biggins, the fashion show raised over $2,000 in support of Special Olympics New York City.

Since the club launched in 2015, its members have worked to create events and initiatives that shed light on the challenges that individuals with disabilities face, many of which go beyond physical and intellectual limitations, they said.

Biggins said hearing the word “retard,” in particular, has harmful effects on the self-esteem of individuals in the special needs community. Through their “Why We Pledge” campaign, which coincided with the National Spread the Word to End the Word Pledge Day, the Special Olympics Club sought to inspire students to eliminate the R-word from their own vocabulary, and to encourage their peers to do the same. 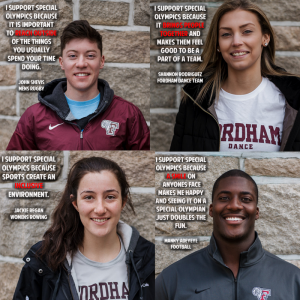 The Special Olympics Club at Fordham organized a “Why We Pledge” campaign in support of the special needs community. Photos by Jessica Mingrino

“Social awareness is everyone’s responsibility, even if it just a small act of kindness each day,” said men’s soccer team player Christopher Bazzini, a Gabelli School junior who has been working with the special needs community for more than four years. “You don’t have to start a massive movement to help others; it could be something as simple as pledging to stop using the R-word.”

Club members said they hope students across the University would not only join them in raising awareness, but also in taking action.

“Students can often get caught up in their daily school activities, but this club has allowed me to keep others who are less fortunate than me in mind,” said Menzzasalma. “From this experience, I have gained great friends and have learned that, even as a college student, I can make a significant impact in bringing joy to another [person’s] life.”